This is a complete analysis of the passing statistics for the New Jersey Devils and Colorado Avalanche from their game on February 3rd this season. Read on for the details.

Share All sharing options for: Passing Analysis: Avalanche at Devils

This is a series of articles looking at the Devils opponent’s passing stats in a game-by-game basis. The logic behind doing this stems from how we use Corsi. If a team attempts 40 shots in a game and their opponents attempt 20, the team with the larger percentage of shot attempts wins the Corsi battle and has the higher CF%--in this case it would 66% (40/60). My thoughts are, what other stat "totals" are teams generally "winning" that can help us evaluate performance? This is the first step towards answering that question.

I’m starting to look at different ways we can use this passing data to evaluate the Devils and how they compare to other teams. This article will look at the Devils-Avalanche game from 2/3/14. John’s recap from the game is here. My passing recap is here. 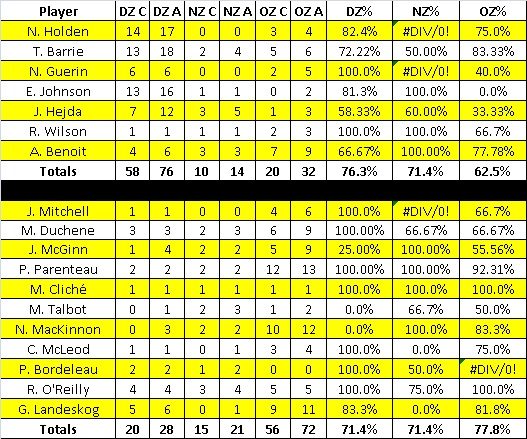 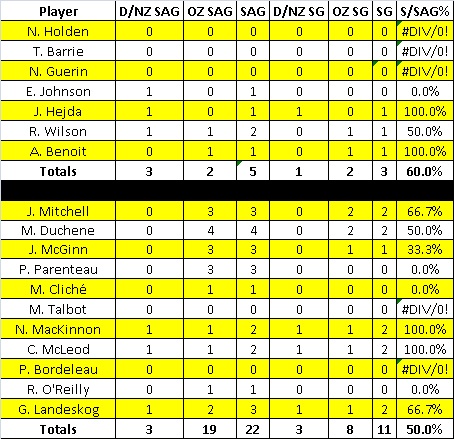 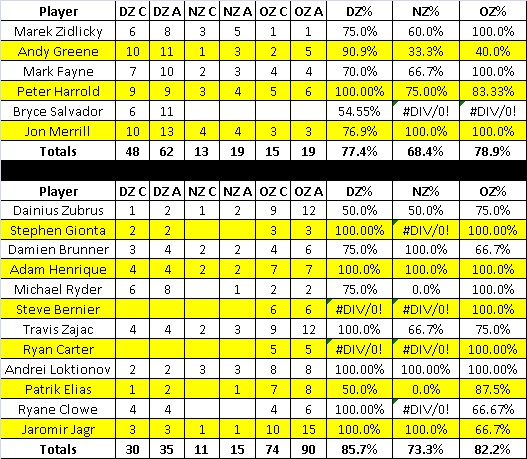 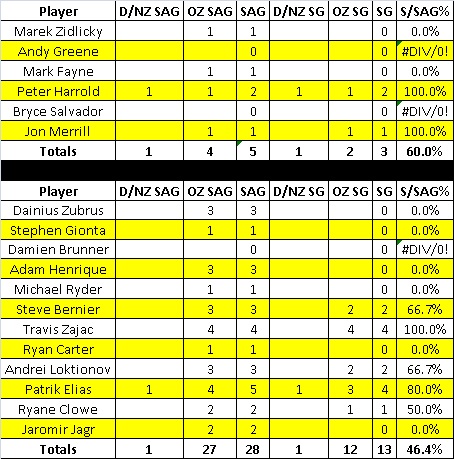 The Avs defense posted numbers like the Devils defense normally does: low shot attempts generated (SAG) and shots generated (SG) totals. They were, however, considerably more active in the offensive zone than their New Jersey counterparts, as they attempted thirteen more passes. Neither group enjoyed great completion percentages. Nick Holden and Tyson Barrie were the busiest pairing, with Andrei Benoit contributing the most in the offensive zone (7/9).

The Avs forwards generated shot attempts by community as John Mitchell, Matt Duchene, Jamie McGinn, P.A. Parenteau, and Gabriel Landeskog each generated at least three SAG, and Nathan MacKinnon and Cody McLeod added two more. Very even performance throughout the lineup. Parenteau (16/17, 3 SAG) had a decent game and if the Avs are truly shopping him, I wouldn’t mind seeing him in red and black come March 5th.

Similar to the Nashville totals, the Devils had a higher completion percentage in the offensive zone than the Avs; this time, the advantage was an even higher at 8.6%. The Devils also were more accurate in the defensive zone by 5.4% and only trailed the Avs by 0.8% in the neutral zone.

Here, we see similar disparities between both team’s shot-generation from their defensemen and forwards. The Devils’ defensemen accounted for 15.2% of the team’s SAG and 18.8% of the team’s SG; the Avs blue line was only 3% better in each category. Clearly, this was a game where offense flowed through the forwards on each team.

You'll also notice that in both of these articles, the Devils had a lower S/SAG conversion rate than their opponents (rate at which SAG are coverted into SG). I'm looking for tendencies in these, so that's another I'll keep an eye on.

By zone, you can see nearly identical percentages, with only a little over 2% difference in OZ and DZ pass attempts between the teams. One thing that stands out is, again, how dependent the Devils are on their forwards to move the puck. The team’s forwards attempted forty more passes than its defensemen, whereas the Avs had as much an even split as you can (122 attempts for defense, 121 for forwards) without it being exact.

Overall, this was much closer than the Nashville game. The CF% doesn’t match up nicely as it does last time, but it won’t each time. We’ll see how that trend continues.

Similar to the Nashville game, the Devils had more possession in the offensive zone, but not as much in the other two zones. I’m all for the Devils playing more of their game at their opponent’s end of the rink, so hopefully this continues. 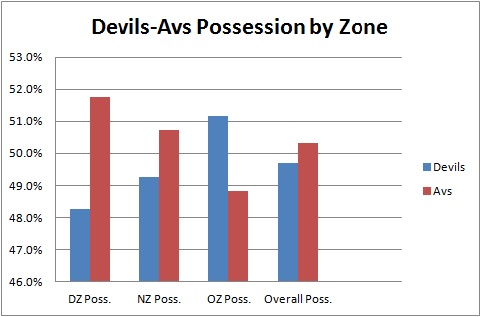 What did you think? What are some other ways to compare some of this data? As always, I’d love to hear your thoughts, suggestions, criticisms, and overall feedback to moving this process further along.