This is a complete analysis of the passing statistics for both the New Jersey Devils and Nashville Predators from their game on January 31st of this season. Read on for the details.

Share All sharing options for: Passing Analysis: Devils at Predators

This will be the first in a series of articles looking at the Devils opponent’s passing stats in a game-by-game basis. The logic behind doing this stems from how we use Corsi. If a team attempts 40 shots in a game and their opponents attempt 20, the team with the larger percentage of shot attempts wins the Corsi battle and has the higher CF%--in this case it would 66% (40/60). My thoughts are, what other stat "totals" are teams generally "winning" that can help us evaluate performance? This is the first step towards answering that question.

I’m starting to look at different ways we can use this passing data to evaluate the Devils and how they compare to other teams. I’ve had a few volunteers that track other teams as they get to it, but I, being an impatient and thick-headed person, didn’t want to wait. Today, we’ll start with the game against the Nashville Predators from January 31st.

John’s recap from the game is here. My passing recap is here. The chart from that game is below, as well as the Predators chart. 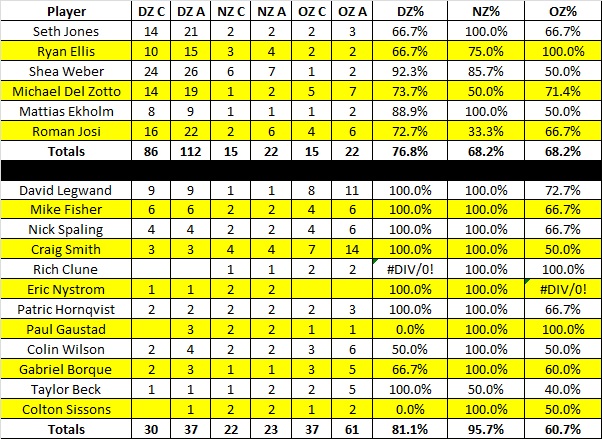 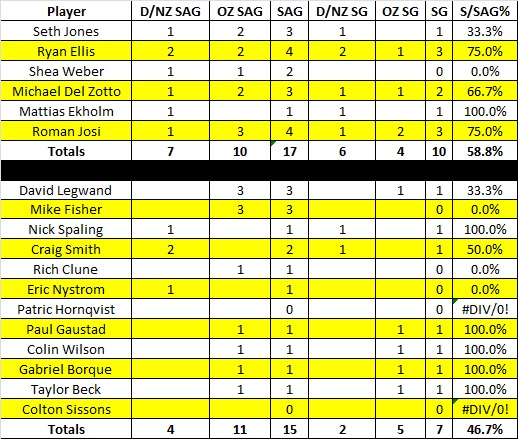 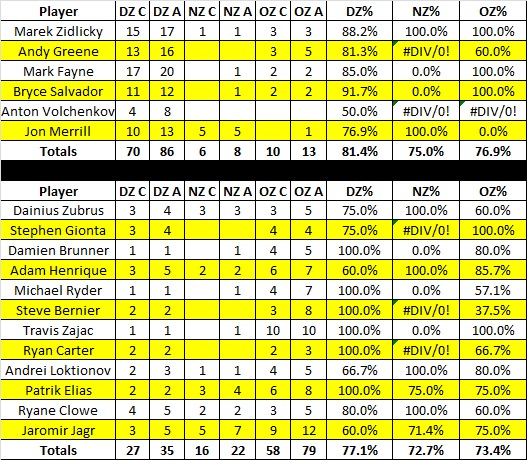 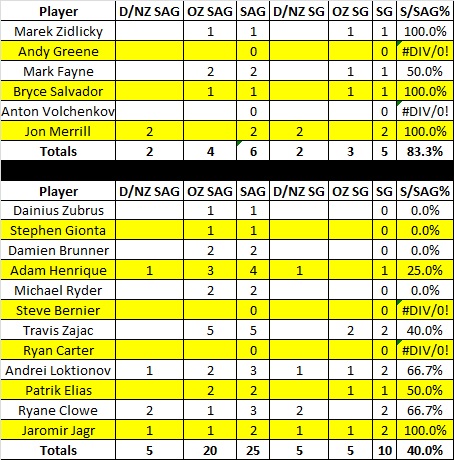 The thing that really jumps out at you is just how much offense Nashville generates from its blue line. Seventeen shot attempts were generated (SAG) from the six defensemen. Ten shots were generated (SG). To put that into perspective, the Devils defense generated six attempts and five shots. The Devils average 6 – 7 SAG and 2 – 3 SG a game.

It must be nice to have a Shea Weber. He completed 31/35 passes and generated twoshot attempts. Ryan Ellis and Roman Josi were a bit off in terms of completion percentage, but they were the real engines in generating shots (4SAG, 3SG each). Seth Jones and Michael Del Zotto each generated 3 SAG as well. This type of production may have been just one game, but it’s something the Devils defense hasn’t produced on even a random basis.

The Nashville forwards are another story. Aside from David Legwand and Mike Fisher (3 each), no forward generated more than a single shot attempt. Perhaps the defense masks the forwards’ inability to generate offense? The reverse of the Devils perhaps?

As you can see above, the Devils had a higher completion percentage in the defensive and offensive zones, with the Predators more accurate in the neutral zone. When I set out to do this (based on what I’d read off of soccer stats), I wanted to see if a team’s offensive zone completion percentage could be indicative of a winning result. Now, this was only one game (and it was a Devils loss due to a lucky deflection at the end), but I’ll be curious to see how it goes from here.

Now we’ll look at where each team generated its chances from. They ended up being quite close in both SAG and SG, with each team leaning on their strengths - Predators: defensemen; Devils: forwards. The Predators had a slightly better conversion rate at 53.1% compared to New Jersey's 48.4%.

We can also look at how the team generated its chances, whether they were more dependent on defense or forwards. In the chart above, you'll see the Devils generated 80% of their shot attempts from their forwards and, likely, from within the offensive zone. The Predators were much more balanced between forward and defense.

We can also look at where each team attempted their passes. You’ll see the Devils attempted 7.9% more of their passes in the Predators zone than Nashville did in New Jersey’s end. Nashville spent more time in the other two zones, and since Nashville generated several shot attempts from beyond the offensive zone (11 to 7), it would make sense they didn’t suffer on the scoreboard while spending less time in the Devils zone.

Lastly, we come to the team possession chart. Nashville held a 53.3% possession edge to the Devils 46.7%. Again, this is based off of pass attempts in the same way one determines who owns the edge in Corsi events. Also, look how similar the CF% is to Overall Possession—within 0.03%. Now, the Devils did own a 5% territorial advantage in the Nashville end and without a miracle deflection they probably win that game, but for one game at least, Pass Possession was nearly identical to Corsi. A bar graph illustrates this data below. 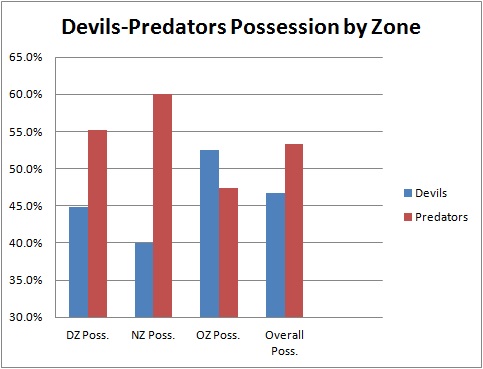 So, there’s our first game with both team’s totals. What did you think? What are some other ways to compare some of this data? As always, I’d love to hear your thoughts, suggestions, criticisms, and overall feedback to moving this process further along.