This is a look at the zone exit and passing stats for the New Jersey Devils 56th game of the season against the Nashville Predators. Read on for the details.

The Predators certainly came to play in this one, repeatedly pinning the Devils back early on and controlling much of the play. A poor handle of the puck from Cory Schneider led to a Shea Weber blast. Some poor goaltending from Carter Hutton led to Patrik Elias’ equalizer. More bounces and luck resulted in a 3-2 OT loss for the Devils. But, 3 points from 4 games and they’re still right there in the Wild Card mix. Now, let’s hope they just find some consistency. Let’s get to it.

Forwards: Travis Zajac, Jaromir Jagr, Ryane Clowe, and Andrei Loktionov were the only forwards to generate multiple shots for teammates, all finishing with 2. Adam Henrique (4) and Zajac (5) generated the most shot attempts.

Defensemen: 6 defensemen to start, which became 5 once Anton Volchenkov (4/8 passing) went out with a lower-body injury. As a result, the other 5 blue liners attempt 78 passes in the defense zone alone, indicative of Nashville’s early, strong possession. Mark Fayne was busiest, as he went 19/23 with 2 SAG and 1 SG. Jon Merrill finished 15/19, generated 2 attempts and shots from beyond the offensive zone. 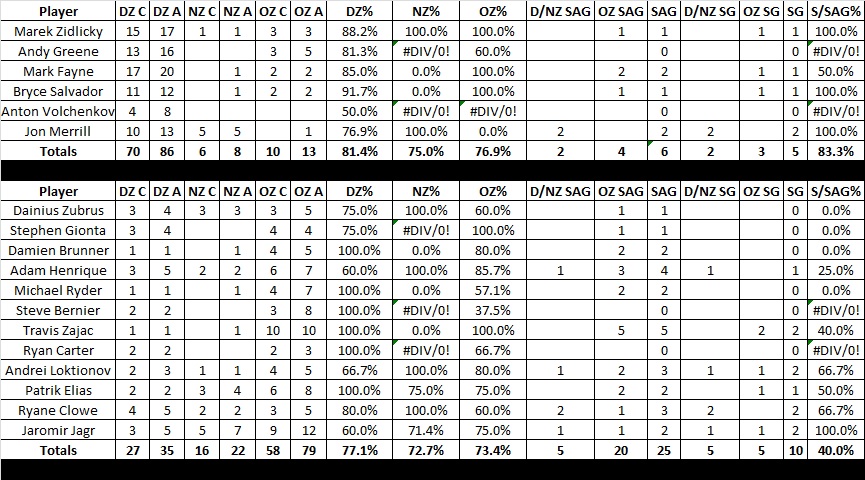 Forwards:Ryan Carter went 5/5, Jagr went 5/6, Damien Brunner 3/5. Those were the only players above 50% in the possession exit department.

Michael Ryder finished at 0% on his 3 exit attempts. But, Henrique really brought the group down as only 2 of his 10 exit attempts maintained possession. Loktionov, Elias, Bernier, Zajac, and Gionta all were at the 50% mark, so there weren’t too many poor performances apart from Henrique and Ryder. 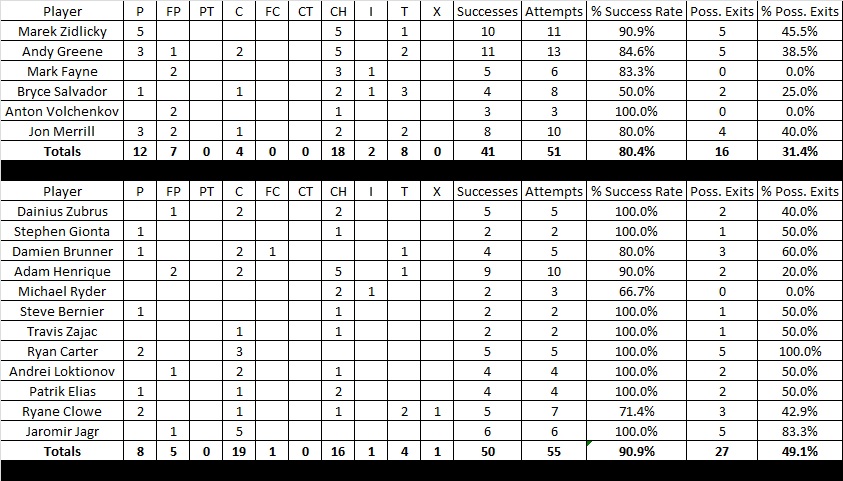 Defensemen: Another game, another 3 turnovers for the Captain. I think that’s 10 defensive zone turnovers in the last 3 games for Salvador. Someone, please, steal his equipment or something.

Greene had another multiple-turnover game with 2, while Merrill had 2 as well. Zidlicky finished with 1 and was the blue line’s best with a 45.5 PE%. Fayne didn’t have a turnover, but all 6 of his exit attempts were without possession. Only a 31.4 PE% overall night from the defense. This is one area of the team they are simply consistently bad at.