This is a look at the zone exit and passing stats for the New Jersey Devils 55th game of the season against the Dallas Stars. Read on for the details.

A one-timer from Zubrus and a power play redirection from Travis Zajac saw the Devils to a 2-0 lead in Dallas. Unfortunately, the Stars came back to tie it inside the final minute of regulation. Of course, this just led to Patrik Elias notching another milestone in his career, recording his sixteenth OT winner. Good for Patty and good for the Devils. Let’s get to it.

Forwards: Not much from Dainius Zubrus, other than the obvious goal. He went 9/11 with no offense generated. He attempted 4 passes from both defensive and neutral zones, and 3 in the offensive zone, so he was involved all over the ice. Jaromir Jagr was a man possessed in the offensive zone, completing 13 of 17 passes, but, incredibly, only generated 2 shot attempts and 1 shot. He went 10/11 in the other zones. Travis Zajac went 10/13 with 3 SAG and 2SG.

Stephen Gionta had an okay game: 6/9 with 1 SAG. But, you know, he hustles and other intangible things, so I guess he did great. On a line with Elias and Damien Brunner for parts of the game, the results were mixed. Elias went 5/11 with nothing generated. Brunner completed each one of his passes (11) and generated 1 SAG and 1 SG.

Adam Henrique had a solid night, generating 4 SAG and 3 SG on 10/15 passing. Michael Ryder joined in the offensive production with 4 SAG and 1 SG on 7/8 passing. Ryane Clowe somehow completed all 10 of his passes in the defensive zone, going 9/10 elsewhere, and generating 2 shot attempts.

Defensemen: Eric Gelinas was only on the ice long enough to miss a single pass attempt. If he’s not going to see ice time here, then sending him to Albany is definitely the right move. He and Adam Larsson were effective after Gelinas’ initial call up, so if they play together down there, they might do that much better up at the big club. Maybe.

Bryce Salvador was once again a train wreck, going 9/17 passes with 1 SAG. Marek Zidlicky went 15/19, but failed to generate anything offensively. Andy Greene attempted the most passes on the night, finishing 18/21 with 2 SAG and 2 SG. A solid night from Greene. Mark Fayne was just as good: 14/17 with 2 SAG and 2 SG.

Anton Volchenkov was his usual ho-hum self: 7/10 with nothing going forward. Jon Merrill was nearly as active as Zidlicky in the offensive zone (5/5), finishing 16/18 with 1 SAG overall. A lot of the talk is on Gelinas this season, but I think Merrill is more well-rounded at this point in his career. 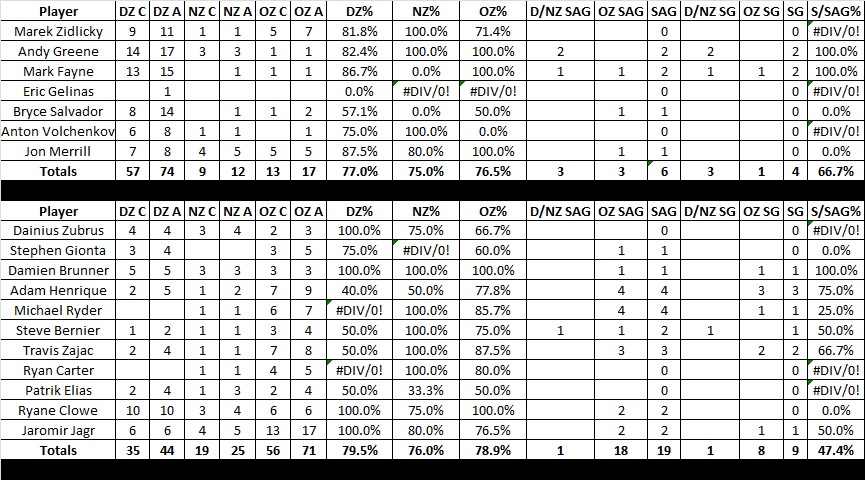 Forwards:Steve Bernier had 2, while Gionta, Brunner, Ryan Carter, and Henrique each committed 1. Gionta led the group with 9 exit attempts, finished at 55.6 PE%, a very good night for him, turnover aside. Clowe went 6/6, Jagr 6/8, and Zubrus 5/6 as they were the standouts when it came to zone exits.

Defensemen: The defensemen were simply terrible at exiting the zone with possession against Dallas, finished at 27.0 PE%. I believe one of the reasons the Devils are near the bottom of the league in shot attempts/shots (as Matt illustrated the other day) is due in large part to the blue line’s inefficiency at linking defense to offense while keeping possession.

Salvador had another 3 turnovers. He attempted 9 exits and 1 was with possession. Fayne was almost as bad, with 2 possession exits on 9 attempts, though just the one turnover. Greene had a rough night himself: 3 turnovers and only 3 possession exits on 8 attempts. Merrill and Zidlicky were the only defensemen at or over 50%, but they combined for only 5 exit attempts. 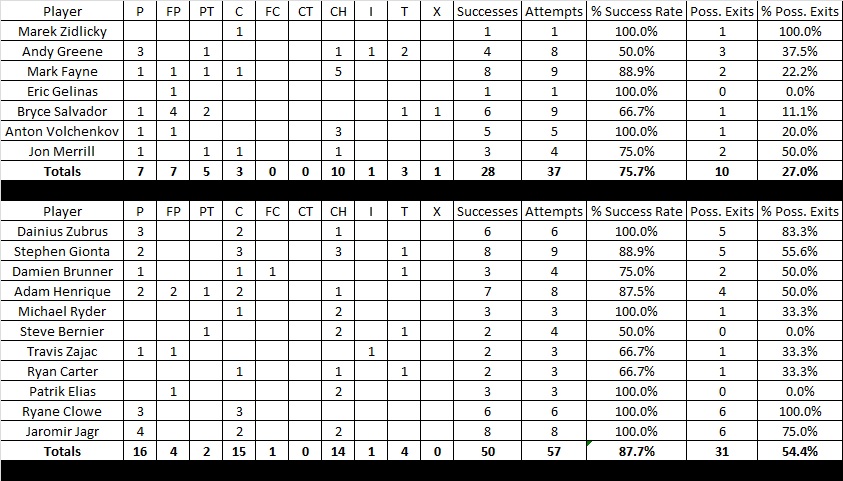