The New Jersey Devils have one of the lowest save percentages in the league. And it took a dual effort from Martin Brodeur and Cory Schneider to get there. This post shows how it all went down and why the answer isn't simply giving Schneider more starts.

Share All sharing options for: Martin Brodeur & Cory Schneider Both Need to be Better for New Jersey Devils

Outsiders will look at the New Jersey Devils this season and be shocked by their goaltending. Prior to Sunday's games, their overall save percentage currently sits 24th in the league at 90.3%. Their save percentage at even strength is 28th in the NHL at 90.8%. With save percentages that low, surely there must be a problem in net. 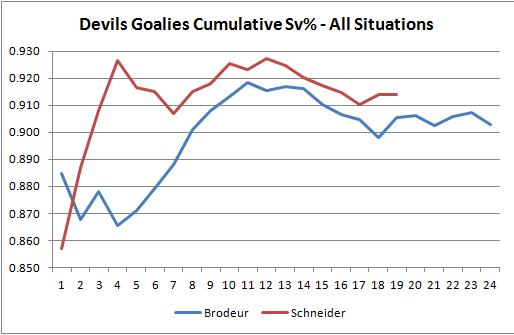 A reasonable question follows: Why has Brodeur played so much? And it is concluded that the issue lies namely with Brodeur and the team's insistence on playing him over Schneider.

I would love to agree with that. As one of the many who has followed the team this season, it isn't that simple. Brodeur certainly has had some awful games over the past month or so. The problem is that Schneider hasn't been good either. Schneider's overall save percentage is boosted by an extremely good 91.4% save percentage on penalty kills. At evens, Brodeur was ahead of Schneider in save percentage until the third period against Chicago on Friday night. (Schneider helped himself with ten saves on ten even strength shots in Buffalo on Saturday). Truthfully, as both goalies were hot in November, they simply weren't good in December. 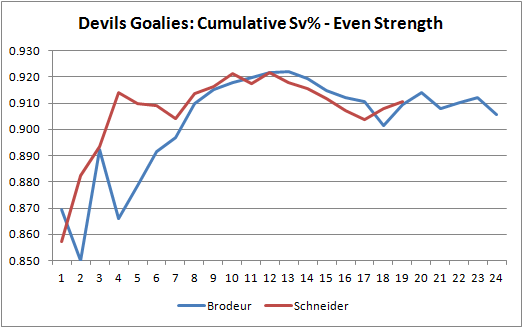 At the end of November, I wrote about how Brodeur getting hot limited the number of games Schneider got. At that time, Brodeur had some clunkers. That opened the door, so to speak, for Cory Schneider. He got both games in a back-to-back and did rather well. Brodeur got the game after that and didn't do so good from a percentage standpoint. Then, things started going south for Schneider. The Devils were certainly worse off for it and they have yet to recover. 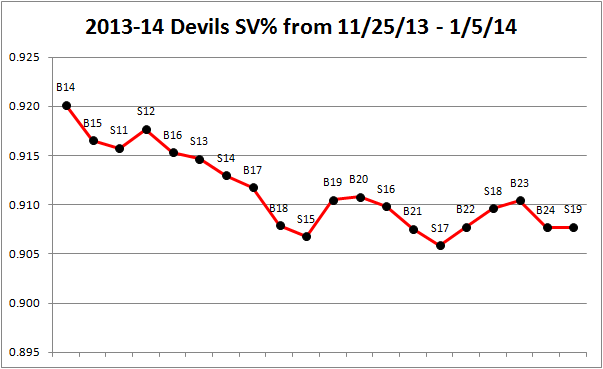 The labels represent the goalie and what game it was for them. B14 represents Brodeur's fourteenth start, S11 represents Schneider's eleventh start, and so forth. It's pretty clear what happened. After Schneider closed out the back-to-back at the end of November with a shutout, the team's save percentage steadily dropped until Brodeur's ninteenth start, a shutout against Tampa Bay on December 14. The team save percentage enjoyed another night above 91% before Brodeur was bad again two starts later.

Schneider didn't bring up the team's save percentage until his eighteenth start, the end of the month win over the Islanders. That's six games after his shutout against Buffalo. That's five games where Schneider could have helped, especially since some of them come after some terrible performances from Brodeur, but he didn't make it happen. As a result, it made sense go back to Brodeur after Schneider wasn't so good. He had a few really impressive nights and so he remained in the mix until things went south again.

At least Brodeur and Schneider had three games of bringing the team's save percentage back up. But then the third period against Chicago happened to make it sink like a rock. Giving up two out of twenty-two shots in Buffalo may not have looked bad but it didn't help much from a statistical point of view.

What's remarkable is that the same trend happened to the team for even strength save percentage. 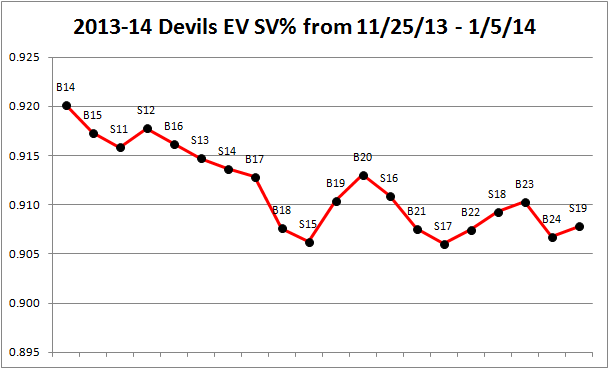 Again: Brodeur wasn't good, Schneider wasn't much better, and so Brodeur got opportunities to play. In these twenty games, Brodeur helped the team's save percentage - in all and even strength situations - four times, one more than Schneider did.

Now, if we look at the raw numbers themselves, it's clear that a bad statistical game from Schneider wasn't as bad as some of Brodeur's. Schneider didn't have any nights where his save percentage for the game was less than 80%. That does not mean Schneider was good though. He only beat the league average once, whereas Brodeur did it four times in this twenty game stretch. It would be more accurate to say that Schneider was less awful.

And here are the raw numbers at evens:

I fully recognize, understand, and appreciate that Schneider may have played more difficult opponents than Brodeur. I fully recognize, understand, and appreciate that Schneider has not received the goal support he deserved (not that Brodeur has always had it either). I fully recognize, understand, and appreciate that Schneider is younger, he's had way better numbers in the past, and so it's reasonable to think that he will be better in the long run. I am not disagreeing with anyone who will eventually argue that. However, the key stat for a goalie is how many saves he makes and simply put, Schneider and Brodeur haven't been good throughout most of the last twenty games. Disregard the final score or the opponent or the shots themselves. Both Brodeur and Schneider have played their way well below league average. As a result, the team's save percentage is also well below league average. It was a tandem effort.

Deciding who start in a game-to-game basis isn't a long term decision anyway. It's based on the short-term play and the schedule. With a lot of back-to-backs and tight schedules, both goalies were likely to play. Throw in Brodeur coming up with great games out of nowhere and so Schneider gets the short of end of the starting count. It isn't due to nostalgia or anything like that. The numbers haven't justified Schneider as being good throughout most of the last month. Schneider did well after Brodeur faltered on Saturday for the first time since the end of November; cracking 91% at evens after three games were he drove past it. Could this be the start of something good? I hope so. Then again, Brodeur had two good games before the third period in Chicago dropped a proverbial anvil right on his save percentage. Maybe a hammer will be taken to Schneider's numbers soon. Then they'll be right where they have been for most of the last twenty games. So I can only believe that Schneider is superior when he actually is superior for more than just a handful of games.

The important thing right now for the team is obvious: getting results, namely wins. The Devils aren't so good that they can afford a few games to let Schneider "find his confidence" or whatever the code phrase is for a goalie to bounce back, nor are they so bad that they can just let goalies play just for the sake of playing. That also applies to Brodeur and his past, which is equally irrelevant in 2013-14. Given that the Devils remain dead last in taking shots and remain in the bottom third in terms of scoring goals, the team would really benefit from better, more consistent goaltending in the second half of the season. I don't care who it's from, really. I want the team to succeed, whether that comes from Brodeur or Schneider getting more starts is irrelevant provided they play well. I would be great if both can be anywhere close to league average at evens or even overall.

For the outsider, yes, goaltending is an issue. But it's not as simple as the Devils dumping Brodeur and figuring everything will be OK. The last twenty games belies that thinking. Schneider definitely will have the chance to play more provided he plays well. That chance is now. If he doesn't, Brodeur will remain in the mix. Peter DeBoer will and should look at recent play to determine starts for both. Now if the Devils can fire more pucks to take advantage of not having an awful shooting percentage for the first time in the past few years, then they'll be in a far better place than where they are now.

Will that happen? Does it really matter who does it as long as it gets there? Please leave your answers and other thoughts about the team's goaltending in the comments. Thank you for reading.