Tyler Myers jumped into a check that hit Dainius Zubrus right in the chin in the New Jersey Devils' 2-1 loss to the Buffalo Sabres last night. Myers will only get a phone hearing, which is rather disappointing from the league.

Share All sharing options for: Tyler Myers Only to Get Phone Hearing for Jumping Head Shot on Dainius Zubrus

Last night, Buffalo defenseman Tyler Myers left his feet and struck Dainius Zubrus in the head.  The hit was enough to knock Zubrus down and have the play - and a goal by Michael Ryder - blown dead so Zubrus could be attended to.  Myers was assessed a two minute minor for an illegal hit to the head; Zubrus returned to the game and appears to be no worse for it.   The National Hockey League Department of Player Safety has determined that the moment warrants only a phone hearing.  Tom Gulitti reported this news at Fire & Ice earlier today; the hearing will be on Monday afternoon.

For the unaware, here is video of the hit in question.

The point of impact can be best seen at 27 seconds into the embedded video.  Here's a screenshot of it with two areas I highlighted myself: 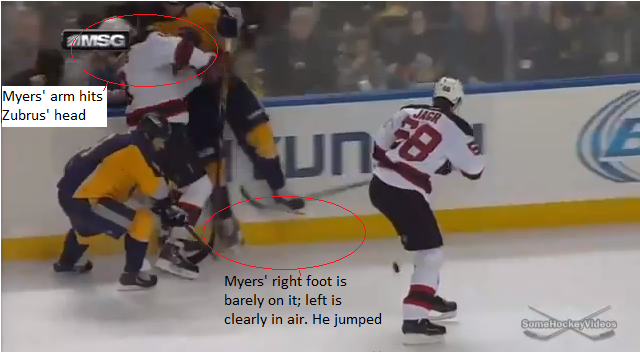 Clearly, Zubrus was hit in the head.  On top of that, the 6'8" Myers felt he needed to jump into a high hit.  Zubrus was trying to move the puck forward along the boards on a zone entry on the power play.  While this made him a legal target for a check, it does not allow anyone to hit him in the head, jump for a hit, or both in Myers case.  It was clearly an intentional decision on Myers' part.  He went to jump into the check and that's what happened.  This was not just a hockey play gone wrong.  The referee was right to penalize him for a hit to the head (whether it should have been more than two minutes is up to you).  It is no surprise at all that this has warranted supplemental discipline from the league.  Myers should be familiar with the process as he's been suspended for three games in 2012 for a hit from behind on Scott Gomez.

I am rather disappointed in the league that it is only a phone hearing.  What this means is that the maximum punishment Myers can get is five games.  But I'm not so much concerned by the punishment limit as I am about the message being sent.  This just further evidence in my eyes that the league remains wishy-washy on the subject of headshots.  This easily could have been a concussion-inducing hit.  He and the New Jersey Devils are fortunate that the hit only stung Zubrus and he was able to play the rest of the game.  This would have been an absolutely appropriate time to have Myers sit down face-to-face with the Department of Player Safety, who can be explain to him this kind of play is absolutely unacceptable.  It would also send a message to the rest of the league that when the NHL claims they are serious about player safety about issues like this, they may actually mean it.  Instead, I fear Myers will just get a talking to and a minimal suspension from the league while the union will continue to do nothing as far as I can tell.   Will Myers and the other players learn the basic lesson?  Maybe, maybe not.

Based on other suspensions for illegal checks to the head this season, he should miss at least two games.  But it could be argued for less than that as he was penalized for the hit and Zubrus wasn't injured. One can never really tell with the Department of Player Safety.   The league misses an opportunity to be tough on head shots further proving my ongoing theory that players may be tough on the ice but really meek off of it.   Perhaps I should just be glad that a smaller gesture is being made instead silence.

What do you think Myers' punishment should be for this hit?  Are you satisfied that he's only getting a phone hearing?  Please leave your answers and other thoughts about the hit and hearing in the comments. Thank you for reading.