I think we all feel a little like this today. This is a look at the Devils zone exits and passing stats for their frustrating display against the Sabres. The zone exits were strong for both defense and forward groups, but the passing stats were a mixed bag.

The Devils didn’t generate that much in terms of shooting attempts via their passing against the Sabres. They played an ugly game and took some avoidable penalties, two of which led to two Sabres power play goals. The top line got back to work, but, like most of the team, they couldn’t generate that much off their high volume of passes. The result was a 2-1 Sabres victory and, at least for me, quite a bitter loss.

Dainius Zubrus went 16/23 with 3 SAG and 1 SG. His completion percentage wasn’t great, but the volume returned to both he and his line mates, so that was a positive sign of their possession habits returning. Travis Zajac went 21/23 with 2 SAG and 1 SG; Jaromir Jagr went 17/19 with only 1 SAG and 1 SG. Again, the volume and possession were there, but the end result in terms of shot attempts wasn’t.

Adam Henrique was the most efficient passer in the offensive zone, completing all 8 passes, generating 3 SAG and 2 SG. No one else besides the top line and Henrique attempted more than 5 passes in the offensive zone. Stephen Gionta and Michael Ryder were the only forwards that did not generate a shot attempt. Collectively, the forwards generated a meager 16 shot attempts via their passes.

The defensemen generated 13 shot attempts, which was just about their season average. Marek Zidlicky, one again, accounted for significant production with 7 SAG and 2 SG. He finished the game 20/23 passing. Bryce Salvador generated 3 shot attempts and 1 shot. Jon Merrill completed all of his passes (17 total) and 15 of which were in the defensive end. As a group, the defensemen only missed 10 passes in total. Not bad. 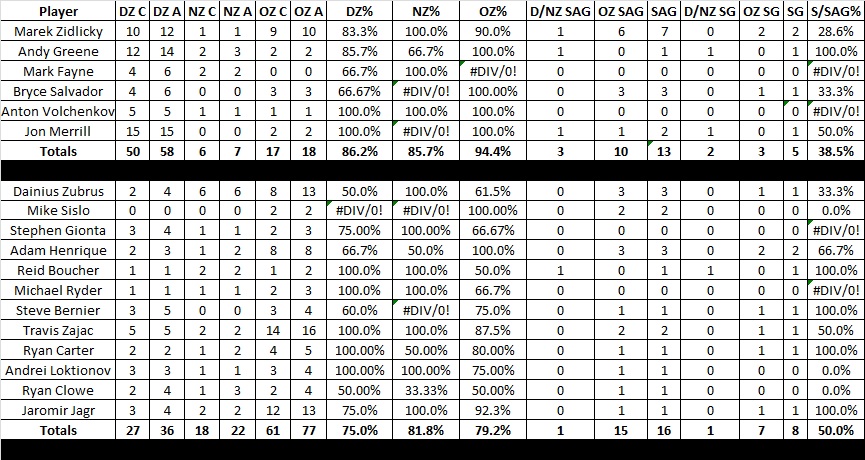 The forwards finished at a 62.5 PE%, so it was a strong night exiting the zone. Zubrus led the team with 9 exit attempts, keeping possession on 7 of them, though he did have 1 turnover Gionta (50 PE%) and Jagr (83.3 PE%) each had 6 attempts. Ryan Carter, Henrique, and Mike Sislo were the only forwards under 50%.

Andy Greene and Merrill each attempt 7 exits, successful on all but 1 and combining to produce 8 with possession. Salvador (20%, 2 turnovers) and Mark Fayne (33.3%, 1 turnover) were the only ones under 50%. 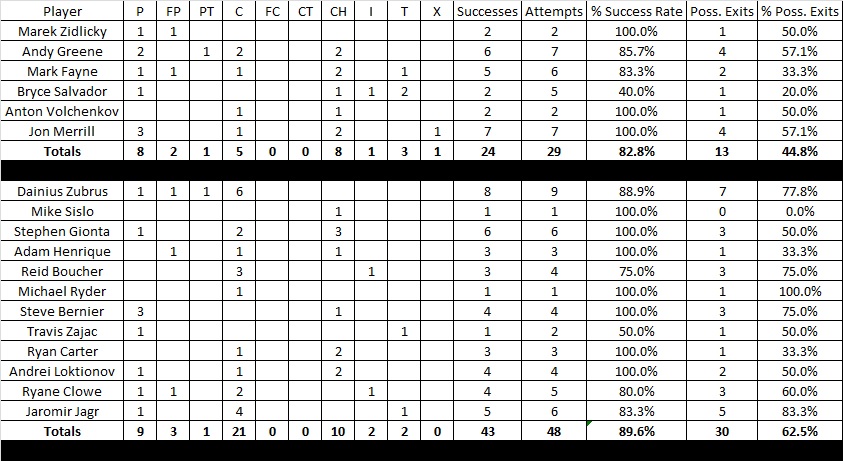