The Devils head to Buffalo to finish the second half of a back-to-back to play the league-worst Sabres after falling Friday night versus the league-best Blackhawks.

An important game to bank some points in presents itself in Buffalo.

The Last Devils Game: Last night, the Devils took on the team at the exact opposite end of the NHL totem pole in the form of the Chicago Blackhawks. The first two periods of the game were very even, with both teams getting their share of opportunities. Patrick Sharp opened the scoring on a tough shift for the Gelinas-Merrill pairing early in the second, but Andy Greene would get one back after blowing by the everyone on Chicago soon after. It was good to see the Devils looking strong against an elite Western Conference team. The wheels game off in a tough 5-minute stretch of the third, though. First a centering try from Patrick Kane deflected off Marek Zidlicky's skate in front to make it 2-1. Then Sharp would add his second on a ridiculous sharp-angle (no pun intended) try past a late-to-get-there Martin Brodeur. Soon after, a scrambling Devils D would give Marian Hossa a good look from the circle and he blew one past Marty high glove side. The Devils would make it interesting with two Marek Zidlicky goals in the last ten, but Sharp sealed the game when he averted a Marty poke check on a breakaway and put it home for a hat trick. John recaps a mostly decent effort done in by a disastrous few minutes from the Devils here.

The Last Sabres Game: The Sabres took on the former Buffalo standout Jason Pominville and the Minnesota Wild on Thursday night. The game went like so many other Sabres games this year in that they were thoroughly outplayed and left Ryan Miller to mostly fend for himself. After a scoreless first, the Sabres would have a disaster of a second, in which the Wild would put up three consecutive goals without a response. Pominville was one of the players who found the back of the net in the game, as he would put one past his old netminder for the Wild's second goal. The Sabres would get one back in the third, but the Wild would cruise to victory and add an empty netter towards the end to make it 4-1. Andy Boron recaps another Buffalo second period disaster over at Die By The Blade.

The Last Devils-Sabres Game: Back at the very end of November, the Devils would take on the Sabres in a game which featured exactly zero goals scored in regulation. The Devils mostly controlled play during the game, but just couldn't get anything that was on target past the Sabres backup goaltender Jhonas Enroth. The Devils had plenty of chances and hit two posts, yet the game remained scoreless all the way through regulation. Travis Zajac had a bunch of chances on his own and the Devils dominated the first and third periods. Cory Schneider didn't get a ton of work, but he was tested in a second period a bit and turned away all challenges. Ultimately, Steve Bernier would emerge the hero when he ripped a wrister past Enroth in OT. The Devils got the win and Schneider got the shutout in what could have easily been a frustrating game. John had the recap of the effort here.

The Goal: Two points, plain and simple. I know you can't take anything for granted in the NHL, but the Sabres are an awful team and the Devils have to keep pace in a division that is sort of starting to get its act together. It is likely that the Devils will be able to at least control the run of play against Buffalo, but to win, they have to be able to finish on opportunities when they get them. The offense has definitely taken a bit of a step forward the past month, so hopefully they can keep it up and put pucks in the net when they're there.

On the defensive end for the Devils, this is a Sabres team that is very limited in terms of weapons so just playing a responsible game without making many egregious mistakes should be enough to keep them in check. The Devils defense had decent game against the Hawks with one sloppy five-minute stretch in the third. The Sabres don't exactly have the personnel to make people pay so rapidly, so if the Devils play as well as they did the majority of last night, I would feel pretty confident about their chances.

Who Scores the Goals?: One of the big reasons for Buffalo's futility this season is the lack of any threat of offense from their group of forwards. The Sabres have one player who has cracked the 20-point plateau thus far, meaning they are on pace to have exactly one 40-point scorer on the season. That player is Matt Moulson, who quite possibly might end up with someone else by season's end. That is astounding, and that's coming from someone who has watched the New Jersey Devils for their entire life. Outside of Moulson, some other possible threats come from Cody Hodgson and Tyler Ennis, who form the rest of the Sabres' top line. Behind them, it's defenseman Christian Ehrhoff and 19-year-old awesomely-named Zemgus Girgensons with 14 points a piece. Ugly times in Buffalo.

Schenider Gets the Nod: Cory Schneider will get the start in the second half of a back-to-back according to Tom Gulitti of Fire and Ice. This will be one of the few times this season that Schneider has gotten the easier half of a back-to-back, but the difference in competition won't get more stark than in these two games where the Devils are facing the best and worst teams in the league in consecutive nights. Schneider will have a chance to build on his last start, in which he was stellar, after a pretty lousy December overall (.892 sv%). If you are looking to get hot or stay hot, this is a good opportunity.

One To Sochi, One Stays Home: The Devils will try their luck against likely Team USA starter in Sochi, Ryan Miller. Miller has been strong in front of a fairly porous defense, keeping the Sabres in a lot of games by standing on his head for much of the year. Meanwhile, Cory Schneider had some USA Olympic hopes of his own, but inconsistency this season and a lack of starts let to Jimmy Howard getting the selection over him. If he wants to prove a point to the selection committee, Schneider can start by outplaying Miller tonight.

Fun Fourth Line: Last night against Chicago, the fourth line of Reid Boucher, Andrei Loktionov, and Mike Sislo produced what was almost certainly the best effort by a fourth line we've seen this year. They created numerous chances and were fun to watch all night. It was good to see four useful lines on the ice again, and they very easily could have put one in the back of the net. Mike Sislo didn't look out of place at all in his first NHL game. I hope Pete DeBoer finds the courage to not immediately re-insert boat anchor Cam Janssen back into the lineup, but I won't hold my breath.

Big Step Back: The Michael Ryder-Adam Henrique-Ryane Clowe line that had looked so good the past couple games had a dreadful night versus Chicago. They looked invisible while watching the game and the stats might paint an even worse picture for the trio. They all hovered around 33% in Corsi and were each on ice for 4 goals against with none for. Woof. They will look to bounce back tonight, assuming they are not broken up.

CBGB Reunited: Ryan Carter, Steve Bernier, and Stephen Gionta were back together last night after Carter returned from his knee injury. They were even thrust into a third line role and actually thrived in it, despite the tough opponent. They were active on the forecheck and actually generated chances well. With Patrik Elias still sidelined and not making the trip to Buffalo, the line will probably have the same role tonight and hopefully they can have a similarly positive impact.

If You Can't Beat 'em, Punch 'em: The Sabres are top-five in the league in terms of fighting majors, which makes sense because it's probably the one of the few areas besides goaltending in which they are actually good. This is one of the main reasons I fear that DeBoer will put Janssen back in the lineup. I would prefer to have the competent fourth line that showed up last night just dominate any goons Buffalo deigns to throw out there (they just grabbed Zenon Kenopka, who has 7 fighting majors, off of waivers, so I'd expect to see him), but I usually don't get my way in these matters. We shall see.

Less Bad of Late: For all the grief I've given Buffalo here, they have actually improved their play a bit in the last month (5-5-2 in December). Yes, they are still at the bottom of the standings but they have also lifted their play up to a reasonable level of late. A look at their ten-game rolling 5v5 close Fenwick average pretty well illustrates the improvement in their play since they cleaned house at coach and GM in November. 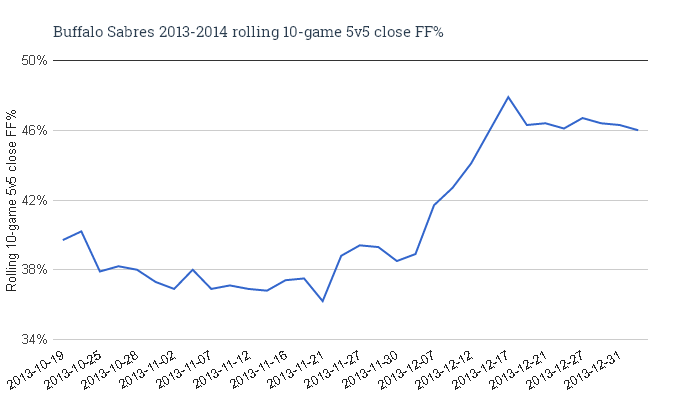 Ted Nolan is getting a little more out of that group these days, so they shouldn't be taken too lightly. Still, their improvement has only brought them from "maybe the worst team ever" to "normal, garden-variety bad." It's still a game the Devils should win, but the Sabres are at least putting up respectable efforts lately, so it's by no means a gimme. If the Devils play the way they are capable of, though, they should put themselves in a good position to win. They have had consecutive games against some of the league's best teams and they played pretty well in both outside of a short stretch of the third versus Chicago, so a letdown tonight would be disappointing.

Tonight's game is an important one to bank some points from, even if it is the second half of a back-to-back. The Sabres are an improved team recently, but they are still last in the NHL for a reason. With the Metropolitan heating up a bit and the season's halfway point behind us, it's crucial for New Jersey start collecting as many points as possible, especially in winnable games. Hopefully they can get rolling with a win tonight in Buffalo.

Comment below with your thoughts on tonight's game and thanks for reading. Go Devils.