40 Games In: A Review of the New Jersey Devils' Zone Exits

Jaromir Jagr just might be saving the Devils season thus far. When it comes to zone exits on this team, there's no one better at transitioning defense to offense with as much possession as Jagr. This article examines each New Jersey Devils skater and how effective their exits have been.

Share All sharing options for: 40 Games In: A Review of the New Jersey Devils' Zone Exits

All Quality of Competition, GF% and CF% figures were pulled from ExtraSkater. First up, the defensemen. Let’s get to it.

Marek Zidlicky had a solid stretch of zone exits over the Devils last 10 games (9 for Zid). His PE% rose almost 2 full points to 46.7%, and his OS% increased exactly 4 points to 81.7%. But most important of all, he lowered his DZ Turnovers per game from 1.97 to 1.62. It was a big problem earlier in the season and while he’s still only better than Eric Gelinas and Peter Harrold, progress is progress. Zid’s QoC is tied for 3rd highest among defensemen, which is down .2% from the 30 game mark. With the emergence of Gelinas and Jon Merrill, as well as the regular pairing of Andy Greene and Mark Fayne, it’ll be interesting to see who receives the toughest competition going forward, especially with Salvador back and Larsson soon to return.

Greene’s PE% actually went down about the same as Zid’s went up. His turnovers decreased by a tenth per game, but his QoC remained the highest among defensemen. He had improved considerably from the 20 to 30 game mark in terms of PE%, so let’s hope this drop is a minor slip and not a wholesale regression on Greene’s part. Greene’s now regular partner, Fayne, played in all 10 games leading up to the 40 game mark. His PE% rose 2%, as did his OS%. Fayne increased his percentages while playing slightly more difficult competition than in the 20 – 30 game split. Fayne also lowered his turnovers by a tenth as well. While he and Greene haven’t been studs at PE%, they are still facing the top quality players each night and coming out ahead in the Corsi battle.

Peter Harrold appeared in only one game over the last 10 and I don’t anticipate him getting in many more unless there’s a trade or another rash of injuries. His PE and OS% are the lowest among defensemen, save for Anton Volchenkov. The team is better without him, to put it bluntly.

Gelinas has usurped Zidlicky as the turnover apprentice on the blue line behind Harrold as he increased his total to 1.68 per game. As a result, his PE% fell to 45.7% and his OS% fell to 77.5%. Gelinas still faces relatively easy competition compared to his fellow defensemen. We’ve all seen him attempt passes that are low-percentage, or try and carry the puck out of the zone and through the opposition. Sometimes it works and sometimes it doesn’t. Honestly, I’m all for him trying and gradually learning when to go and when not to go. It’s refreshing having a young talent on defense that can occasionally do that. His Corsi is the highest among defensemen, unsurprisingly.

Sal was healthy enough for one game, but it didn’t change his totals that much. So much has changed on the blue line since early on in the season; I wonder where he’ll eventually play in terms of QoC and regular partner. Volchenkov’s PE% stayed in the basement at a miserable 35.6%. His Corsi percentage hasn’t necessarily suffered because of it, which is curious, but we’ll see how that plays out. Merrill’s PE% dropped quite a bit, but he’s still the highest defenseman at 52.6%. His turnovers increased by nearly half a game, a significant increase, and probably the reason for his PE% to drop.

No change for Larsson as he’s still recovering from injury.

Dainius Zubrus continues to give the Devils steady play with only small changes to his zone exit percentages. His QoC has dropped just slightly, but he’s still playing against top opposition along with the rest of the top line. Travis Zajac, like Zubrus, continues to put up steady zone exit numbers against the most difficult competition. His PE% improved to 51.2% and his turnovers decreased ever so slightly. The old man on their line, Jaromir Jagr, just keep getting better. His PE% rose to 62.8, which is easily highest on the team, regardless of position. He’s even lowered his turnovers per game to .28, so he’s incredibly responsible as well.

Patrik Elias’ 51 PE% is probably lower than we’d think it would be, but it’s pretty close to what it was at the 30 game mark too. He’s playing against the next level of competition behind the Zubrus-Zajac-Jagr line. Of course, it seems like “who is playing with Elias?” is a nightly question. For a while it was Damien Brunner, as the two seemed to click. Brunner added 6 games in the last 10 due to his unfortunate injury. In that time, he increased his PE% about 2% (maybe the Elias factor? Who knows?). His QoC has come down just .1%. Hurry back, Brunner.

Of course, one player goes out and another comes back: Ryane Clowe came back to play in 2 games during this 10 game split and increased his PE% in the first 6 games he played by just over 6%. Provided he stays healthy for the next 10 games, we’ll have a decent sample size to evaluate Clowe. I imagine he’ll slide in with Elias on a regular basis in the near future.

Andrei Loktionov’s exits rebounded slightly as he’s back to 60.3 PE%. He had dropped a bit, so it’s nice that his rate stabilized. Loki plays against all types of competition as Deboer has him all over the lineup. In fact, his QoC has remained the same in the 7 games he’s played since the last summary. He even found a way to lower his turnover rate a bit more.

Adam Henrique, Reid Boucher, and Michael Ryder have played together a bit recently, so let’s see how they’ve been doing. Henrique and Ryder had possession exit percentages only a tenth apart (49.2 and 49.1 respectively), which are solid improvements on their rates 10 games ago. Having played in all 10 games since his first 2, Boucher is doing okay at 46.6 PE%. He has his gaffes and moments here and there like Gelinas and Merrill, but considering how young he is, Boucher looks solid thus far. Boucher has a higher Corsi rate than Henrique and Ryder as well, but only slightly.

The CBGB line, that hasn’t been together that much this year due to injuries in the lineup, is quite a mixed bag of results. Steve Bernier’s numbers moved slightly, but nothing to praise or criticize. His QoC has remained the same. His 47.6 PE% is decent considering the bottom-six role Bernier should be playing. Ryan Carter hasn’t played in the last 10 games, so no update there. But Stephen Gionta. Well, Gionta just stinks. His 26.3 PE% is the lowest of any player not named Tim Sestito and he’s facing some of the less imposing competition. He’s also one of the few forwards with a Corsi rate under 50% (48.1).

Tim Sestito and Cam Janssen have combined to play 32 games this season. 32. Games. At least Janssen exits the zone 16% better than Stephen Gionta. Yes, you read that correctly.

Jacob Josefson only played in 3 games since the last summary, but his 56.7 PE% is still 3rd highest on the team. Having only played 16 games, Josefson’s season has been full of stops and starts, but 16 games is a good enough sample size to confirm what most already know: JJ is generally good with the puck and doesn’t give it away that often. Imagine if he actually played with real hockey players? Speaking of other banned Swedes, Mattias Tedenby added 3 games as well over the last 10. His PE% rose to 40% from 34%, so he had some strong games in there. He lowered his turnover rate slightly, but his Corsi dipped in those 3 games. I’m less upset about Tedenby not getting into the lineup as he’s had better chances to prove himself than Josefson, but either of these guy sitting for Gionta or Janssen is just blasphemy.

I’m going to get on my soap box for a minute and wonder aloud about what stats the Devils actually track and use to evaluate their players. I can’t imagine by what metric Stephen Gionta continually outperforms Jacob Josefson. We know JJ is better at exiting the zone with possession. We also know that JJ is a better passer than Gionta (will be discussed in the next summary). We know that JJ has a better Corsi rate than Gionta. That covers exiting the zone, passing, and shot attempts…what else is there? As I’ve now spent 40 games tracking these and passing stats, it’s led to me start wondering…What do the Devils track themselves? This is an honest question and not meant to be sarcastic and I’d love to hear your thoughts below.

Here we see that the Devils have just slightly increased their team PE% from 46.2 to 46.8%. They’ve lowered their zone exit attempts by 1 per game. Unfortunately, I’m not sure how many games the Flyers tracker has done, so I can’t compare averages, but it’s something I’ve been told that the ZEN website might have going forward.

Unfortunately, it looks like only the Flyers tracker has stuck with it thus far. There are no new totals for the Stars, Blues, Penguins, Lightning, and Kings, so I’ll just be comparing the Devils to the Flyers here. If you want to see what we had at the 20 and 30 game marks on those other teams, you can check my out summaries here and here. Also, feel free to visit the Zone Exit Database here. 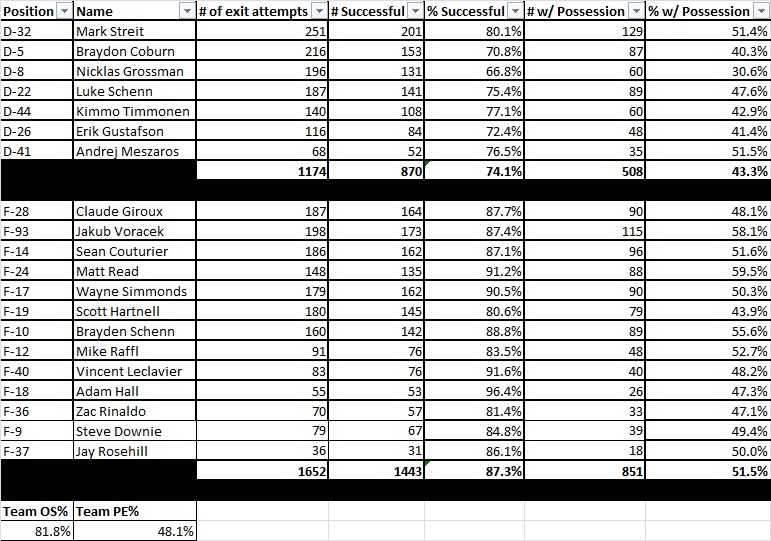 The Flyers as a team exit the defensive zone with possession 1.3% more than the Devils do. The defensemen are almost identical (Flyers D 43.3 PE%; Devils D 43.4 PE%), but the Flyers forwards have possession exit rate of 51.5% compared to the Devils forwards 49.9% rate.

Last time, I looked at the relationship between PE%, CF%, and GF% and on average PE% was more closely associated with a team’s GF% than CF%. Although there’s less new data to compare teams, we can see that PE% is only a difference of 0.9% and 1.0% for the Devils and Flyers respectively as it relates to those teams GF%. Their team CF% rates were 6.3% and 3.9% apart from their GF%. Individually, you’ll see that a skater’s PE% isn’t as close to their GF% as last time, but it’s still closer on average than their CF%.

And please offer your opinions, suggestion, criticisms, statements, analysis, etc. Collectively, I’m sure this could be a great forum for debate. What would you like to see next time? Are there any stats you’d like to see brought into this discussion? We’ve looked at the relationship between PE%, CF%, and GF%, but since the other trackers have given up, apart from the Flyers tracker, what are some other stats you’d like to see? I’m thinking of combining the zone exit and passing summaries next time and seeing if there are any interesting relationships between PE% and any of the passing stats. A lot of this is trial and error to see where patterns form, but I’m all ears for suggestions on where to go next.