This is a look at the zone exits and passing stats for the New Jersey Devils 54th game of the season against the St. Louis Blues. Read on for the details and an indictment of the Devils captain.

This was a night where the score line flattered the Devils. Yes, they lost 3-0, but if not for Schneider in net, it should have been much worse. The obligatory Alex Steen goal 3 minutes in was the difference until a Bryce Salvador tripping call allowed the Blues to double the lead on the power play. The Devils couldn’t put one behind Jaroslav Halak, and an empty netter sealed their 3-0 fate. However, at Even Strength, the Devils rarely did much of anything for the first 2 periods.

At the end of 40 minutes, 28% of the Devils passes were attempted from inside the Blues zone. That is over 10% below their season average. They were able to tilt the ice (that’s being generous) enough to get it up to 37.8%, or just under their season average by the end of the game, but the Blues asserted their territorial dominance for lengthy periods of time in the first 40 minutes. Zone exits and turnovers were poor and in abundance. Let’s get to it.

Forwards: Patrik Elias (17/22) had a solid night, finishing with 6 SAG and 3 SG. Jaromir Jagr equaled Elias’ SG on one less SAG while going 16/22. Adam Henrique was the only other forward to generate multiple shots with 2 on 3 SAG.

Jacob Josefson went 5/6 with nothing generated. 4 of his passes were in the neutral zone as I noticed he would often defer the puck to Jagr, Zajac, or whomever else was on the ice with him, allowing them a clean zone entry. He’s a decent player and I don’t know why Deboer doesn’t put him between Elias and Brunner, which would allow Zubrus to go back up top. Big Z’s production has decreased and he doesn’t seem like the same player since being taken off the top line.

Speaking of Brunner…yawn. He went 5/8 with 2 SAG and 1 SG, but I can’t recall him making any impactful plays since…the last Blues game? Zajac was efficient, missing only 1 of his 14 pass attempts, but only generated 2 shot attempts and 1 shot. Ryane Clowe went 11/13 with 6 SAG, but only 1 SG. Half of Michael Ryder’s passes were from his own zone and he didn’t do much going forward.

Defensemen: Salvador led the team in pass attempts. Without looking it up, I’d wager that the Devils have never won when that is the case. He went 19/24 overall, generating 1 SAG and 1 SG in the offensive zone. Not terrible on the surface, but the zone exit section is reserved for Salvador vitriol.

In fact, Salvador’s offensive contribution shames the other defensemen as he was the only blue liner to generate a shot. Eric Gelinas (only 14/20) generated 2 SAG; Marek Zidlicky (17/21) generated 1 SAG; Andy Greene (12/17) generated 1 SAG; and Mark Fayne (11/13) also generated 1 SAG. Anton Volchenkov (5/9) basically did nothing.

I was alarmed at the pass attempt disparity between Salvador and Greene. Then when I realized how ineffective the Devils were at transitioning defense to offense, it made perfect sense. 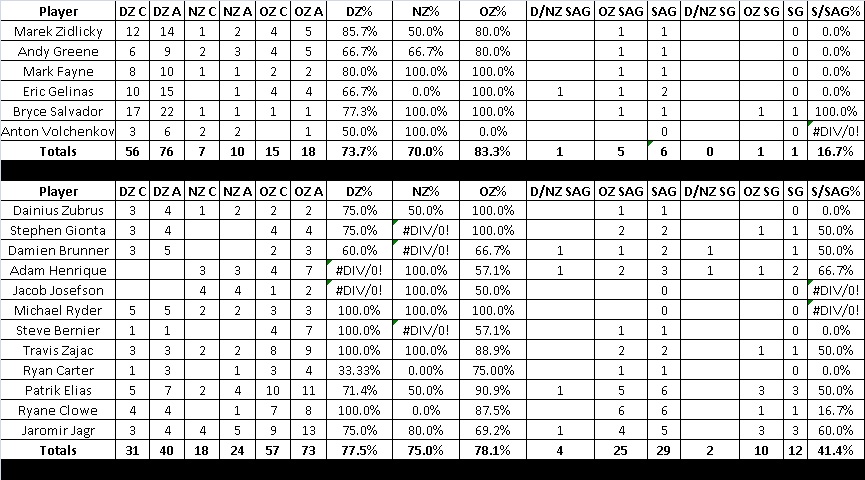 Forwards: Subpar from the forwards with an overall 44.4 PE%. Biggest offender? Carter: 9 zone exit attempts, 0 with possession. 32 of the forwards’ 45 exit attempts came from Carter, Jagr, Clowe, Elias, and Brunner. Brunner was the only one in that group to exceed 50%, while Clowe finished right at 50%. Remove Carter’s horrible night at the forwards finish at 58 PE%, so it was mostly him dragging them down.

Defensemen: Salvador, turnover machine. None of the defensemen were good in their own end against the Blues, but Salvador turned it over on 4 of his 6 attempts. The other 2 were an icing and a pass. He’s terrible.

Greene and Volchenkov struggled mightily as well as each finished with only one possession exit apiece on their combined 15 attempts. Gelinas was actually the best at 44.4 PE%, just ahead of Fayne and Zidlicky. As my dogs said this morning when I told them how bad the Devils were: “woof.” 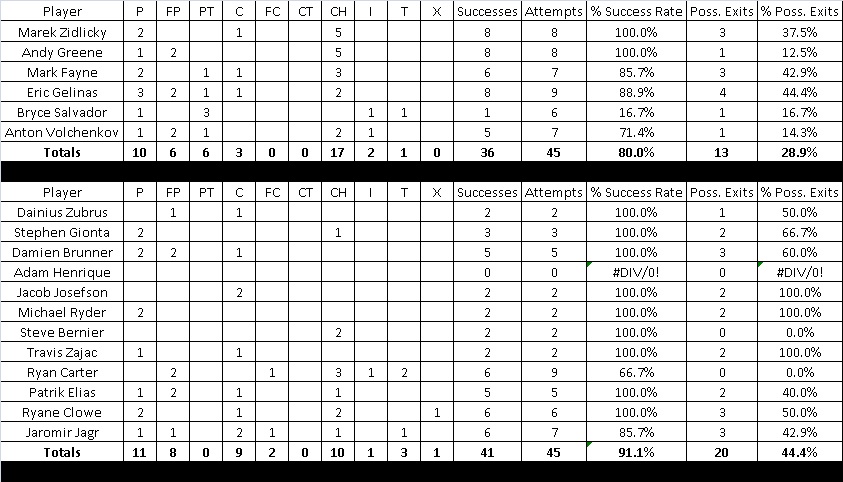