In a game the Devils kept close for two periods, they owed most of that to the bottom 6 forwards. If the top 2 lines could have only found a breakthrough at some point, we'd be talking about getting a point rather than coming up 1 goal short. This article takes a look at the zone exit and passing stats for tonight's, the 42nd, game against Chicago.

For two periods tonight, the Devils played right with the best team in the league. In a span of six minutes to start the 3rd period, we all saw why they are the best team in the league. Some sloppy play in their own end allowed the Blackhawks to put a few quick ones past Martin Brodeur. Let’s take a look at the zone exits and passing stats to see how the bottom 6 forwards contributed more than the top 6. Let’s get to it.

As will be a common theme tonight, Dainius Zubrus had a very quiet game by his standards: 6/8 with no SAG. Travis Zajac had a decent game, completing all 13 passes and generating 3 shot attempts, but none resulted in shots. Jaromir Jagr completed only 10/16 passes with 4 SAG and 1 SG. Not your typical night from the top line.

The newly formed 2nd line of Adam Henrique, Michael Ryder, and Ryane Clowe wasn’t much better. Henrique went 10/11 with 0 SAG; Ryder 8/11 with 1 SAG and 1 SG; and Clowe with 10/11 with 0 SAG. Certainly the volume wasn’t there for everyone due to the special teams play in the first 2 periods, but take a look at some of the other numbers for the rest of the forwards.

Newcomer Mike Sislo completed 7/8 passes with 1 SAG and Reid Boucher completed 5/8 passes with 2 SAG and 1 SG. They did this alongside Andrei Loktionov who reminded everyone what he can do when he plays with competent hockey players: 14/16 passing and 6 SAG with 3 SG. Very nice game from Loki.

My usual whipping boy, Stephen Gionta was back with Ryan Carter and Steve Bernier and they had a good game. Watching them tonight made me think of the Devils 2003 Stanley Cup Video where Lou Lamoriello spoke about why he broke up the A Line when he traded Jason Arnott: he felt that they couldn’t play with other players and that wasn’t good for the team overall. I only thought of that because they seem so much better as a trio than whenever they are separated. 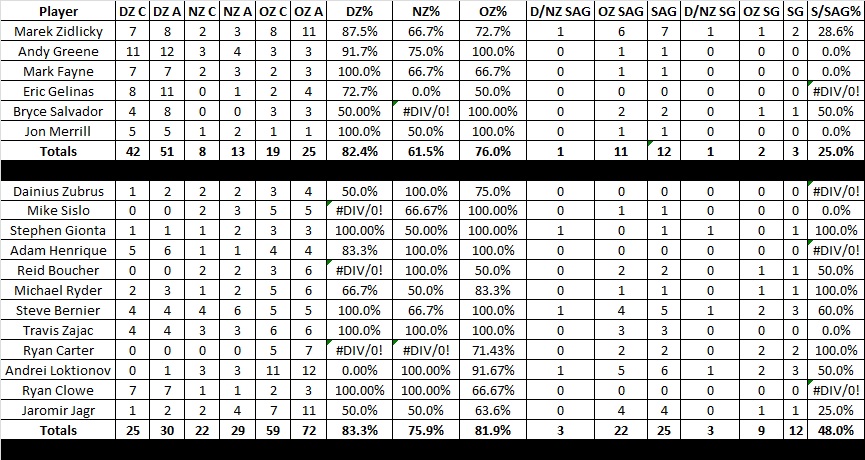 Finishing at 55.8 PE%, the forwards were good but not great due to 4 turnovers committed by Clowe and Gionta. Clowe led the team in attempts with 11, with 6 maintaining possession. Zubrus was next with 7 attempts and 6 keeping possession. Most forwards only attempted 3 – 5 zone exits. 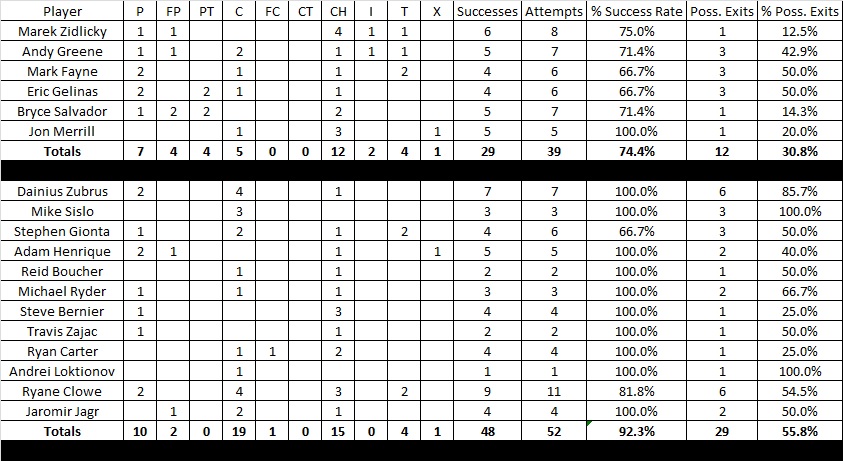