This is a look at the New Jersey Devils' zone exits and passing stats for their 53rd game against the New York Rangers. It started promising and quickly became a sour experience. Read on the details.

It was a great start for Devils fans. Clowe to Elias for a breakaway goal. Jagr to Elias for a power play goal. Zajac in front for a goal. 3 goals in a period. Fantastic. Then, the passing dipped and the shot attempts dried up. No-shows from several players and an extremely poor transition game led to their demise. Overall, less than a third of the Devils passes were attempted in the offensive zone, which is the lowest I’ve seen all season. Let’s get to it.

Forwards: Yes, Patrik Elias scored 2 goals, but the line of him, Dainius Zubrus, and Damien Brunner was ineffective as a whole. Elias went 10/15 and generated 4 shot attempts with 3 shots. A decent output. The other 2? Not so much. Zubrus (2/4, no SAG) and Brunner (5/7, no SAG) had very little impact on the game.

Travis Zajac (18/20, 6 SAG, 2 SG) and Jaromir Jagr (10/15, 3 SAG, 2 SG) continued to generate offense despite playing with a 3rd new winger in as many games. Jacob Josefson (9/11, 1 SAG, 1 SG) was better than Joe Whitney, but not great. Granted, it was his first game in over a month, I think, so hopefully he’ll get a few more games to prove himself. Honestly, I’m not sure why they didn’t leave Zubrus up top and just put JJ between Elias and Brunner on the 3rd line, but that’s just me.

Defensemen: Over 75% of the defensemen’s passes occurred in the defensive zone. When they did go forward, they were able to generate 7 shot attempts and 3 shots, which are about their season averages. Eric Gelinas attempted 20 passes in the defensive zone, more than any other blue liner. He completed 17 of those 20 and went 2/3 in the neutral zone.

Marek Zidlicky was the busiest of the defensemen, going 20/28, generating 2 shot attempts and 1 shot. Bryce Salvador was also quite busy (20/22), but was efficient as both of the shot attempts he generated turned into shots. Andy Greene (15/19) and Mark Fayne (12/14) had similar outings as both were largely ineffective at generating offense—1 SAG apiece.

Anton Volchenkov had little impact, recording 5/6 in the defensive zone and nothing else. 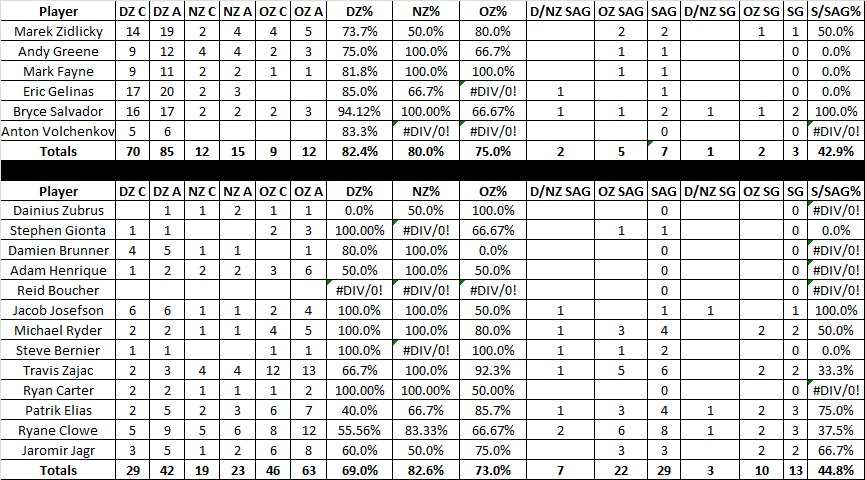 Forwards: 46.5 PE% is a good 5% below average for the forwards. The attempts were pretty well spread out, with Clowe once again leading the team (9 total attempts 4 with possession). There were only 43 zone exits for the forwards and most had between 3 – 5 attempts. A “blah” game. 4 turnovers certainly didn’t help.

Defensemen: 45.9 PE% for the defensemen as most of the turnovers and poor play seemed to occur more in the neutral and offensive zones (from a passing/zone exit standpoint). Only 2 turnovers were committed, but that belies a subpar defensive effort; when the Rangers entered the zone they either scored or accidentally put the puck out of the zone on their own several times. Gelinas actually led the blue line with a 57.1 PE%. Fayne was lowest as only 1 of his 4 attempts maintained possession. 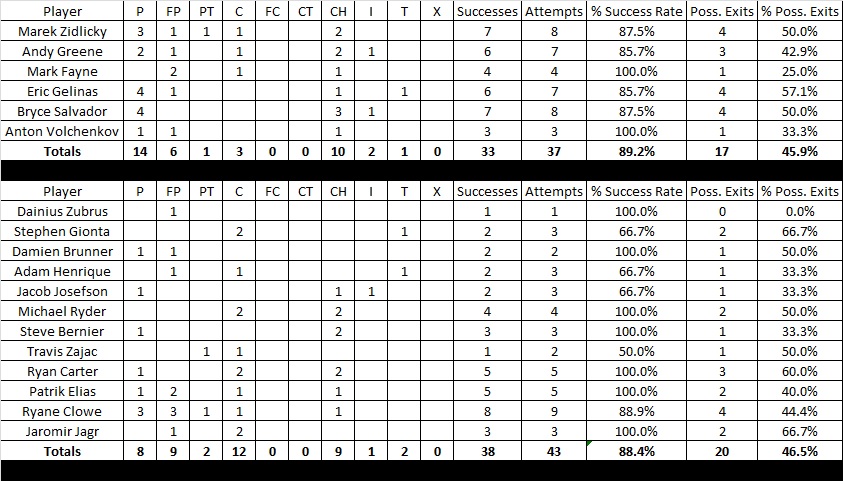