This is a look at the zone exits and passing stats for the New Jersey Devils' 52nd game of the season against the Washington Capitals. Read on the for the details.

The Devils came out shooting against the Capitals and could have won by a more comfortable margin than the 2-1 score line, but play evened out over the course of the game. There were some solid passing games from certain players, but less impactful play from others. Looking at these stats game after game, the defense continues to be sub par in terms of zone exits and generating offense. Let’s get to it.

Forwards: Joe Whitney went 7/10 in his debut, but failed to generate any offense for his line mates. He wasn’t the only though, as Stephen Gionta (6/7), Damien, Brunner (3/5), and, surprisingly, Patrik Elias (6/9) all failed to generate a shot attempt for their teammates.

Travis Zajac (3), Dainius Zubrus (2), and Michael Ryder (2) were the only forwards to generated more than 1 shot for teammates. Overall, the forwards were below their season average in terms of both SAG and SG.

Defensemen: A low-event game for the defensemen as the pass totals were spread out among all 6 for the most part. They were below their season average in terms of total pass attempts. Andy Greene stood out as the most active in the offensive zone completing 5 of6 passes and generating 3 shot attempts with 1 shot as a result. Marek Zidlicky and Mark Fayne also generated 1 shot each. 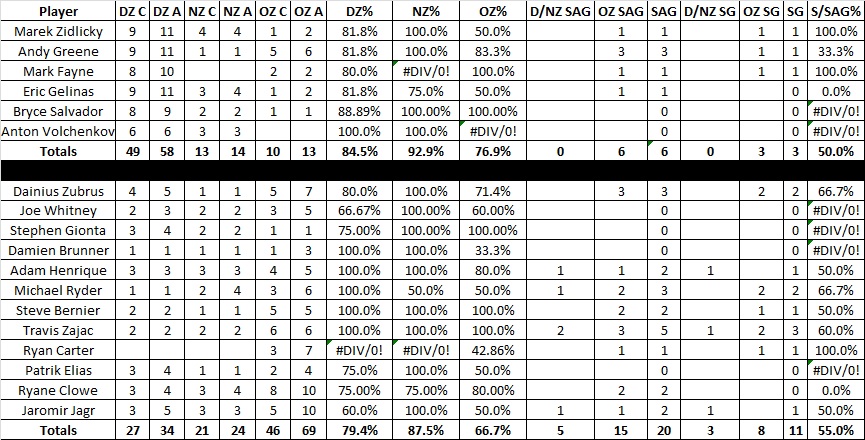