This is a look at the zone exit and passing stats for the New Jersey Devils 51st game of the season against the St Louis Blues. Read on for the not-so-pretty details and why the score line flattered the Devils.

In was perhaps the most relaxing game since the 5-0 blanking of the Nashville Predators, the Devils got goals from 7 different players in their 7-1 rout of the Blues. Despite the one-sided score line, there were aspects of the game that did not appear so one-sided. Specifically, the zone exits were not good at all as the Blues forwards forced numerous turnovers in the Devils’ zone. Let’s get to it.

Forwards: The forwards still managed to attempt 80 passes in the offensive zone despite the score line, so they weren’t sitting back the entire game. Of course, they didn’t need to generate as many changes and this game only saw the put 20 SAG with 8 SG. Steve Bernier was very effectively, especially early on, as he tied Travis Zajac for the team lead with 4 SAG; Bernier, however, was much more efficient as he generated 3 shots. In fact, the CBGB line, much better together than apart, generated 8 of the forwards’ 20 SAG.

Ryane Clowe, Jaromir Jagr, Damien Brunner, Reid Boucher, and Patrik Elias were the only other forwards to generate actual shots on net.

Collectively, the defensemen completed 25/26 in the neutral and offensive zones, so I was a bit surprised they only generated 7 shot attempts. They were a bit below average in their own end (77.1 completion percentage). 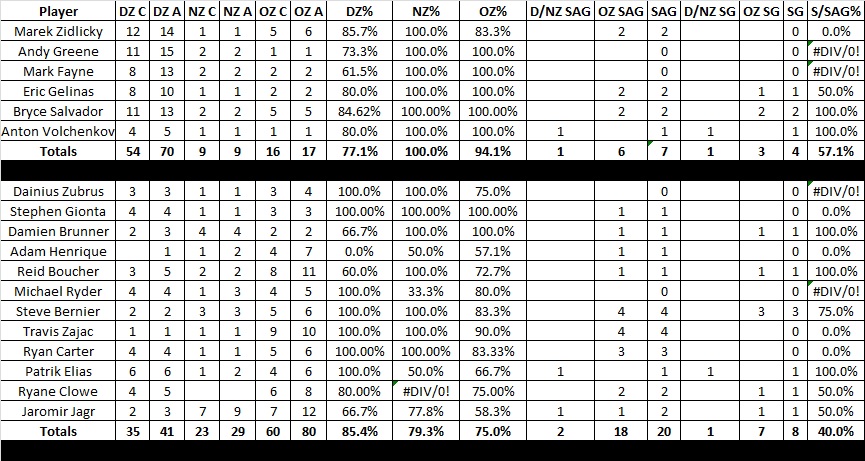 Forwards: While the forwards were better than the defensemen, they were still several points below their season average. They committed 7 turnovers as well. Boucher, Clowe, and Stephen Gionta led the team with 10, 9, and 9 zone exit attempts respectively. Gionta had, arguably, one of the better nights as he finished with a 55.6 PE%. Henrique had the worst night as each of his 4 exit attempts failed to retain possession. Clowe and Jagr attempted 15 exits combined and only 5 with possession. Off nights by both of them drove down the group’s overall percentage.

Defensemen: 9 total turnovers for the defensemen, 4 of which were passes that were intercepted by Blues in the defensive zone. Collectively, the defensemen finished at 35.1 PE%, which is significantly lower than their season average mark of 44%. They were improving, but one step forward, two steps back. Gelinas actually finished with the highest percentage, but he attempted the 2nd fewest attempts. Fayne led the way with 9 attempts, but only 3 with possession. Zidlicky and Andy Greene continue to put up similar numbers. Anton Volchenkov: 6 exit attempts, 0 with possession. 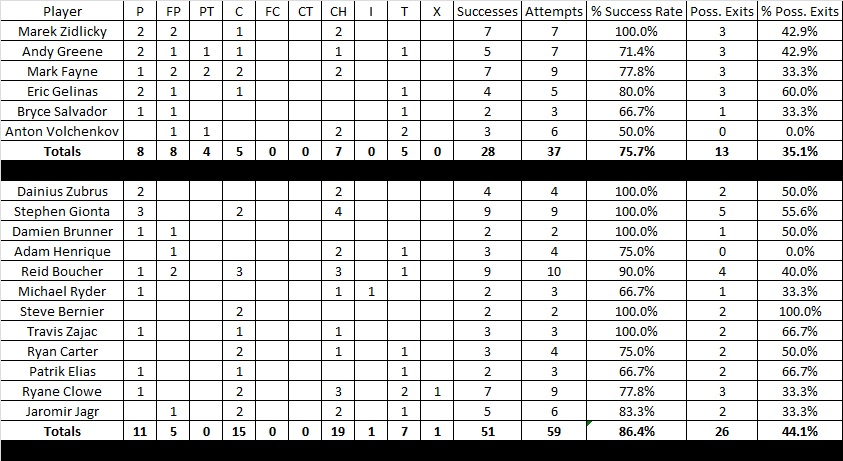