Frustration In the Standings For the New Jersey Devils

This season's iteration of the New Jersey Devils has felt maddeningly inconsistent and unable to do anything but tread water for the longest time. When sifting through the standings, what can we reveal about this season that is making it feel so frustrating?

Share All sharing options for: Frustration In the Standings For the New Jersey Devils

At the start of the day today, the Devils currently sit one point out of eighth place in the Eastern Conference and are still very much in the hunt for the playoffs. This season seems to have everyone at the breaking point, though, with a team that seems perpetually just on the outside looking in. Yes, they've bounced up into the playoff picture here and there, but they've never been able to stay long. Still, they remain right on the edge of the picture and they tend to look competent on the ice more often than not, so what is driving everyone crazy about this team?

So to try to look at which teams were more streaky and which ones were more "one step forward, one step back," so to speak, I collected each team's season in the form of winning streaks and losing streaks. I counted shootouts the same as any other win or loss for now, since we're trying to nail down why we're all pulling our hair out and even if a loss comes in a shootout, you generally leave disappointed. So first came the raw data for all of the teams 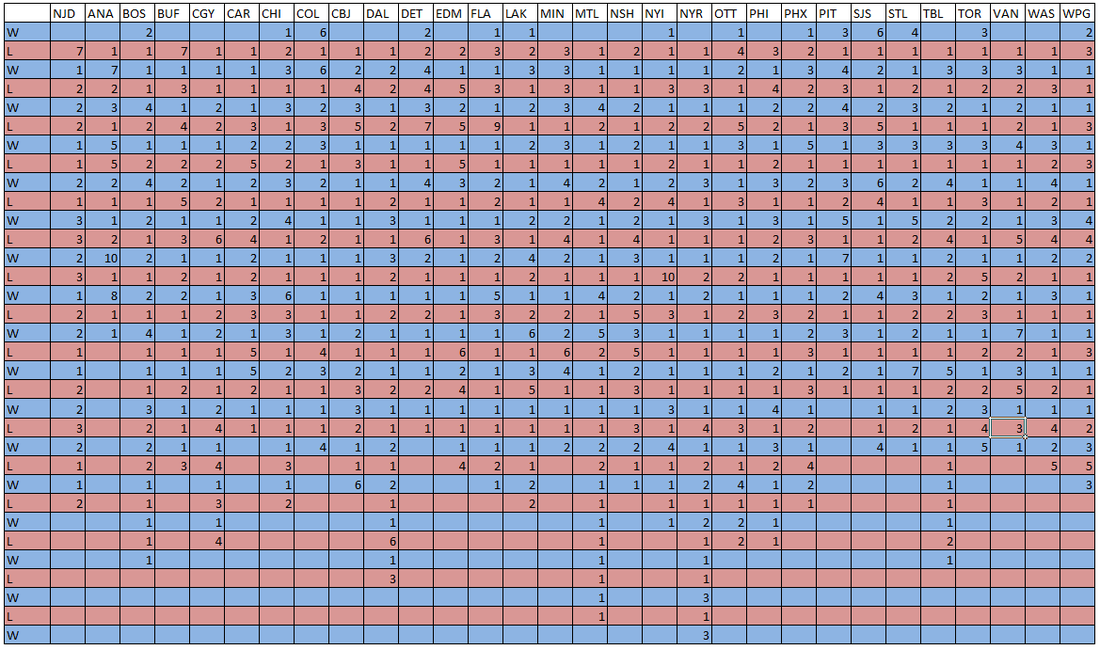 With this grid, we can break down which teams are hot and cold and which teams are sort of running in place by alternating wins and losses. When I started working on this, I figured the Devils would be among the most unpredictable teams in the league, as they have seemingly been treading water since late October, but overall they end up middle of the pack in terms of streakiness. They haven't had a long winning or losing streak since the dismal 7-game slide to start the season (nothing more than 3 games), but they have sort of been doing their winning and losing in bunches, if small ones. Here's a table of the teams who are most streaky to least streaky:

So, the Devils are neither overly streaky nor particularly uneven game to game, so I'm not sure the "treading water too much" theory that I had necessarily holds water. Though perhaps the way that they slide two games forward and two games back is even more frustrating than alternating wins and losses.

The Devils have had some losing streaks but they are not particularly an outlier compared to others. Their season-opening losing streak puts them near the bottom in terms of longest losing stretch, but they've done a decent job to stay away from any tailspin since them, with no losing streak topping three games. (See below for the league-wide losing streak data. 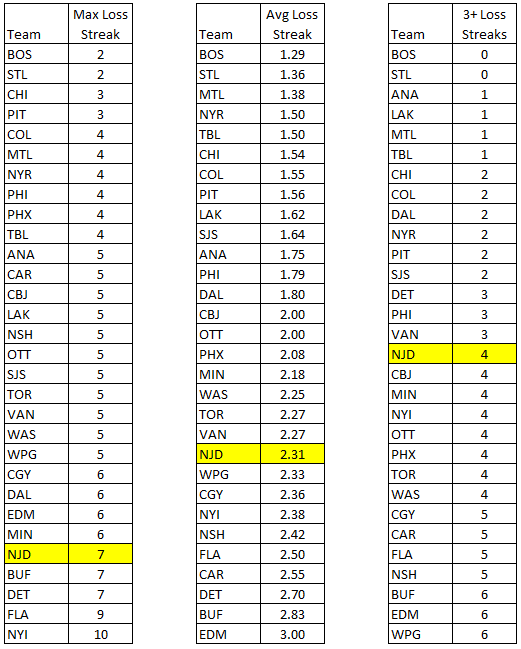 Still, they are in the lower half of the league in terms of average losing streak and number of losing streaks. They are staying afloat because they haven't truly gone in the tank at all, but they are certainly getting damaged by all of these losses coming in bunches of twos or threes. They have to start being able to make losses an isolated incident instead of every one becoming two or three in a row, but they've still done an okay job to avoid extended droughts.

This is likely the big source of frustration for the Devils and their fans this season. The Devils have started to look good in various stretches but have never been able to take a leap in the standings due to their complete inability to string together wins. See below for the league-wide max win streaks, average win streaks, and number of 3+ game win streaks. 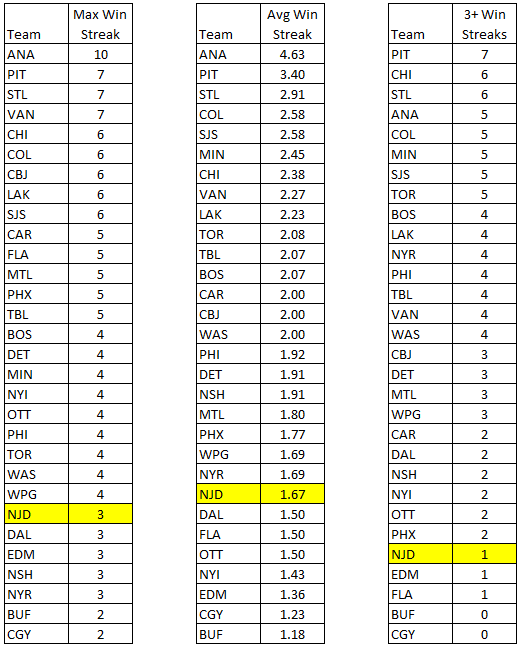 The teams at the top are mostly expected, with the red-hot Ducks and the cruising Penguins averaging over three wins every time they are on the upswing. The Devils have only managed to hit three wins in a row one time this entire season. That puts them in the company of Edmonton, Florida, Buffalo, and Calgary, as a team that has failed to assemble multiple actual 'win streaks'. Three also happens to be their season long streak, something that only Buffalo and Calgary have failed to hit. If the Devils ever want to get out of neutral, they will have to buck this trend and find a way to go on a run that vaults them into the playoffs.

The X-factor through all of the issues the team has had this season has been the shootout. The Devils' inability to win a shootout has put them in the record books for futility with an all-time worst 12 consecutive losses in the gimmick going back to last season. The shootout has officially become the bane of every Devils fan's existence right now. A look at the shootout differentials (wins minus losses) for the league this year paints a not-so-fun picture:

Even recently-off-the-schneid Nashville and Detroit are hardly within striking distance of the Devils in points dropped in the shootout. At 0-8, the squandered points in the tiebreaker are really starting to do damage to this team's playoff hopes. A .500 record in the shootout would have this team sitting fairly comfortably in a playoff spot right now, 3 points clear of the 9th place team. They are tied for 7th in the conference in ROW but currently sit 12th in the standings. Of all the issues the Devils have this season, this is the one likely most responsible for the current restlessness of the fanbase. It also is part of the reason they can never seem to get on any kind of roll. And while some cite the lack of shooting talent as responsible for the problems, though I'm not so sure. Buffalo is actually 6-4 in the tiebreaker, so teams that objectively stink can still do well in the skills competition. I'd pin it on a perfect storm of cold shooters, cold goales, and bad luck (though that probably makes it more aggravating).

Hope For an Weary Bunch

I know it's not necessarily what people want to hear, but I think this team still has a decent shot to get back into this. The last 100 games have been aggravating, for sure, but their underlying numbers remain among the tops in the league and something as fluky as the shootout eventually reverts to the norm (Detroit has won 2 of 3 since losing their previous 11). They just have to find a way to sustain some success and maybe win a damn shootout every now and then to have a good shot.