How Accurate are the New Jersey Devils' Players When They Attempt to Shoot the Puck?

The short answer is simple: The New Jersey Devils don't shoot a lot of pucks at all. But this post looks at accuracy, whether most of their shooting attempts get to the net.

Share All sharing options for: How Accurate are the New Jersey Devils' Players When They Attempt to Shoot the Puck?

So far this season, the New Jersey Devils are not finding the target - the net - enough this season. The Devils are only just slightly ahead of Buffalo in average shots per game with 26.3 according to NHL.com before Monday's games. In terms of total shots taken, Extra Skater lists the Devils at 28th in the league with 1318 shots - and they've played more games than the two teams with fewer. Given that one needs to shoot to score, the fact that the Devils are near the bottom in taking shots in all situations means that they should shoot more.

However, this question deserves further analysis. It's clear that the Devils are not shooting and scoring as much as they probably need to be this season. So I have wondered how good is their accuracy this season? When a player takes an attempt (something else the Devils are near the bottom as a team), how often is it an actual shot on net? Could generating more shots on net be as simple as the figuring out the team can miss the net and get blocked less?

I explored this question last season when the Devils had similar problems. Yes, even with two former Devils firing away, they had issues with scoring and shooting. Fortunately, there is now Extra Skater. The site maintains a shooting dashboard for all situations by player, team, and other filtering categories. We're not bound to 5-on-5 only or ice time limits as with Hockey Analysis. For a baseline, I determined the average number of shots, misses, blocks (that is, attempts blocked in the Event Summary), individual Corsi (all attempts by that player alone), and individual Fenwick (all attempts except blocks by that player alone) for all forwards and defensemen this season prior to Sunday's games. Here are those averages:

With some rounding, it's easy to identify which Devils players have done more at firing the puck than the average forward or defensemen. Now, let's look at Extra Skater's stats for all 28 Devils skaters. I organized the chart based on the number of attempts they've made, added some basic calculations such as individual Corsi, Fenwick, and shots over attempts percentage. I sorted the list by total number of attempts made and embolded any number that was higher than the positional average. (Note: There's a big assumption I'm making here, I'll get to it later in this post.) 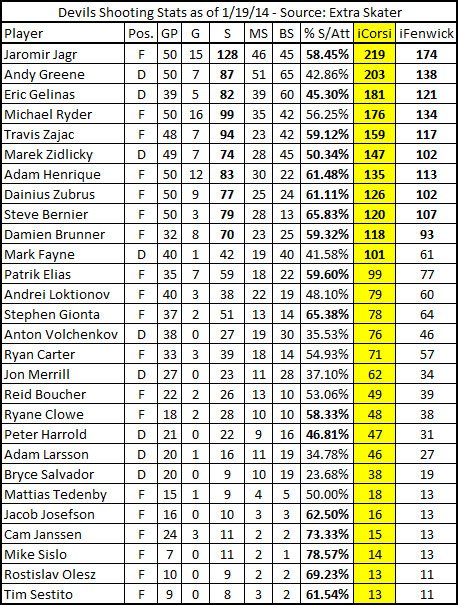 There are ten players who beat the average NHL player at their position in shots, total attempts, and total attempts without blocks. Jaromir Jagr leads everyone on the team as one may expect since he has more shots than anyone. Michael Ryder will be the next player to hit the 100-shot mark, but the second most prolific forward remains behind two defensemen: Andy Greene and Eric Gelinas. Curiously, Dainius Zubrus and Steve Bernier got above average even though they have not been stand out shooters. They are the result of being healthy and playing significant minutes. Damien Brunner remains inside the top ten despite missing several weeks due to injury and being scratched for a number of games in November.

Beyond that, it's slim pickings. Mark Fayne has done better than the average NHL defensemen in attempts but is just behind the others. With a few more games, he could be the fourth defenseman on the team to at least be ahead of average in these categories. Patrik Elias' injuries have held him back to a degree. I'd like to think Ryane Clowe would be up there had he been available for most of the season. However, these are all guesses.

Incidentally, check out the difference between Gelinas and Jon Merrill. Merrill simply has not been the cannon Gelinas has been this season. When fans want Gelinas involved for offense, this is likely why. He has brought it. Gelinas' biggest contribution has been his shot and his willingness to use it. Merrill does not. Of course, the issue between the two has been about the defense. The coaches trust Merrill a lot more than Gelinas going back; hence, the recent division of ice time favoring Merrill. If he's not able to bomb attempts on net from distance, then what is there? But that's a topic for another day. Let's consider forwards and defensemen as a group.

In terms of accuracy, the forwards have been pretty good. As a group, they are better than the league average. Only Ryder, Andrei Loktionov, Ryan Carter, Reid Boucher, and Mattias Tedenby had a lower percentage of shots over attempts this season. Among those five, only Loktionov has been below 50%. Ryder was real close to being above average, and that's OK since he's been firing away. Sure, accuracy can be better but I'm not seeing anything dire. I'm actually OK with this finding from this standpoint.

I can't feel the same for the Devils' defensemen. They haven't been as accurate as a group. A lower percentage should be expected since defensemen are usually shooting from a longer distance and are therefore more prone to missing the target or getting their shot blocked. Yet, only Gelinas, Zidlicky, and Peter Harrold have found the target at least as much as the average NHL defenseman. In fact, only Zidlicky has more shots on net than misses and blocks combined. Almost all of the other defenders have been blocked out nearly as much as they get shots, with Greene being an exception. Greene attempts so many pucks and they've went awry at times.

Therein lies a problem. The Devils' defense has contributed about a third of the team's attempts this season, and again, three of the top ten attempters on the team are defenseman. The average shooting distance for a defenseman is usually 50-55 feet from the net, which again explains why they've been blocked more often than most of the other forwards. I don't know if this is too much, too little, or just a finding that doesn't necessarily mean much with respect to the rest of the league. I do know that it really highlights the team need for offensive help. While we all want a productive player, it's clear they could use someone who can fire plenty of pucks on net. I don't mean someone who just fires the puck whenever it's on their stick, but ideally someone who can get into spaces the Devils create and takes plenty of initiative. If you're into coming up with trade proposals or want to suggest someone, then see if they tend to shoot a lot. It would be closer to the need to fill, not just any name forward with whatever pedigree. Getting Brunner back will help, but further assistance would be appreciated.

I also think these numbers highlight the effects of how the Devils create space on offense. From the top line of Jaromir Jagr, Dainius Zubrus, and Travis Zajac to the CBGBs crashing in, the Devils prefer to get the puck in deep and work along the perimeter to gain possession on offense. Often, they will throw the puck back to the point. With two to three forwards in deep and most of the defensive attention facing that way, they're usually open. This gives them opportunities to shoot. And the point men on the power play often move the puck, so defensemen do get shooting lanes that they can take. The system may be a big reason why the defensemen have taken about a third of the team's attempts. It may not necessarily be a bad thing, since I don't know if the current roster is built for a low cycle. Trying to maintain the puck in deep and focusing more on getting looks for the forwards may yield fewer attempts in general. It's something the team should consider looking at.

Of course, there's a big assumption in these and most of the stats we look at: that these are the true shooting numbers for the Devils. Scorer bias is very real. The Devils' undercounting of shots was highlighted back in 2008 by Tom Awad as he pointed out the foundation of sand many of these stats are on. Way back in 2010, I pointed out how the Devils' scorer has undercounted blocks and misses. So it could be that while many of the Devils' forwards have a higher shots-per-attempt percentage than the NHL average based on the officially released numbers, the reality may be different. The defensemen may be less accurate than this shows. Whoever becomes the new Director of Hockey Analytics for the Devils would be wise to maintain a more rigorous and complete count of events to get to the real heart of the matter internally. It may not change the larger conclusion that the Devils need to put more pucks on net, but it may change the conclusion that they just need more volume - more accuracy may truly help the cause.

All the same, now that you've seen the numbers as they are, I want to know what you think. Can the Devils do anything different now to try and get more shots on net? Would the Devils need outside help anyway? Do you think it is a problem that the Devils' defense attempts as many shots as they do? Was there anything in this data that jumped out at you that you think is important or at least noteworthy? Please leave your answers and other thoughts on the Devils' shooting in the comments. Thanks to Extra Skater for having these numbers available. Thank you for reading.