This is a look at the zone exit and passing stats for the New Jersey Devils' 50th game of the season against the Phoenix Coyotes. Read on for the details.

The New Jersey Devils attempt 244.1 passes each game. Against the Coyotes, they attempted 334. So, why was the total so high? Limited special teams play and the fact that the Devils chased for most of the game probably contributed to that. A late1st period power play goal from Ryane Clowe gave Devils fans hope going into the second, but the Devils weren’t able to tie it. Phoenix scored a power play goal of their own to extend the lead. The Devils set up shop in the Coyotes’ zone, but didn’t make it a 1-goal game until late. Despite how the game unfolded, the Devils still had a great chance to tie with a minute left when Patrik Elias fed Jaromir Jagr. It wasn’t to be.

Ryane Clowe and Jaromir Jagr combined to generate 10 of the forward group’s 27 shot attempts. They also were responsible for generating 4 of the group’s 13 shots. Patrik Elias and Travis Zajac made the most of what they created, as each of their shot attempts resulted in a shot on goal for a teammate. Stephen Gionta only missed 1 of his 8 pass attempts, generated 3 shot attempts. Adam Henrique also added 3 SAG.

Defensemen: The defensemen certainly did their best to generate offense (17 SAG), but the quality of those chances was poor as only 3 shots were generated from those 17 attempts. Mark Fayne (18/20) generated 5 shot attempts, but each failed to find the target. Marek Zidlicky attempted a whopping 38 passes—completing 29—and generated 4 shot attempts and 2 shots. Jon Merrill also had a busy game, going 25/30 with 2 shot attempts. Andy Greene was the busiest in the offensive zone and finished 27/30 with 3 SAG and 1 SG. 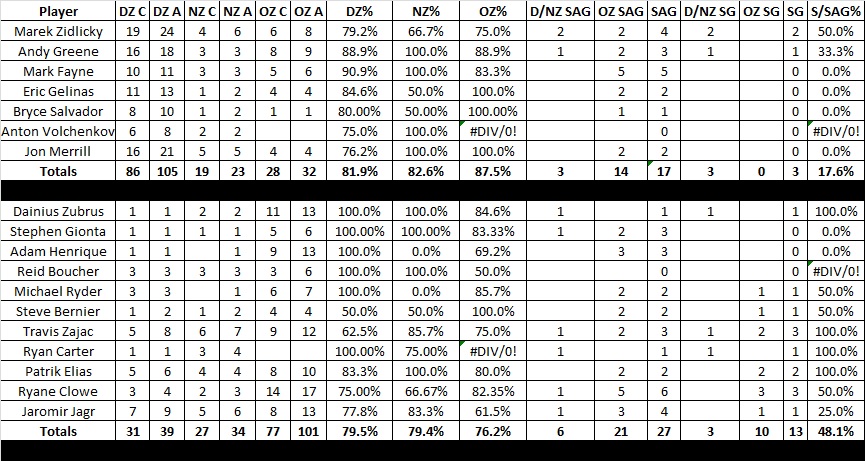 Forwards: 6 turnovers for the forwards, but no one had more than 1. The forwards finished with another strong performance with 59.3% of their zone exits keeping possession. Gionta was the only forward under 50%. It was a good performance from each of the other 10 forwards.

Defensemen: 7 turnovers for the group, 1 apiece for each defenseman. Collectively, the defensemen finished at a 44.4 PE%. Zidlicky and Greene were the busiest with 10 and 9 exit attempts respectively. Eric Gelinas, Anton Volchenkov, and Jon Merrill were the worst of the bunch. 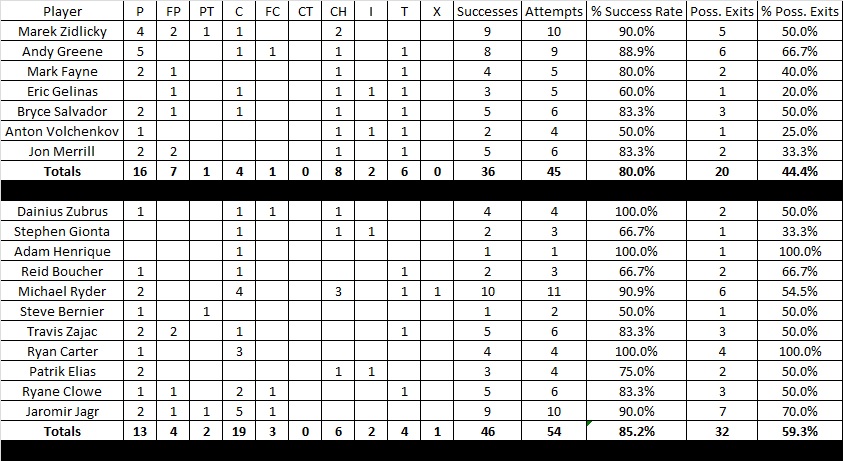