This is a look at the New Jersey Devils' zone exit and passing stats for the 47th game of the season against the Toronto Maple Leafs. While the Devils significantly outshot the leafs, it should have been an even wide margin as many of their pass-generated shot attempts failed register as a shot. Read on the for stats.

Plenty of SAG to go around as the forwards generated 34 shot attempts via their passing. Unfortunately, they only converted 10 of those into actual shots. All but Reid Boucher had at least 1 SAG.

Due to the special teams play, the passing totals were slightly down from recent games. The only forwards to exceed 10 pass attempts in the offensive zone were Dainius Zubrus (10/13) and Jaromir Jagr (10/12). Travis Zajac went a mere 3/4 in the OZ. The trio combined for 10 SAG and 3 SG.

The CBGB line actually was quite efficient going forward as they combined to complete and attempt 20 passes in the offensive zone. They put up 12 SAG and 3 SG, so, again, good quantity and low quality.

Marek Zidlicky (24/27) and Andy Greene (21/25) were the only defensemen that consistently contributed to the offensive production. They combined for 10 SAG and 6 SG. No one was particular poor with their passing, but aside from Bryce Salvador’s single SAG, no else contributed offensively. The defensemen completed 60 of 66 passes in their own zone for a sterling 90.9% completion rate. 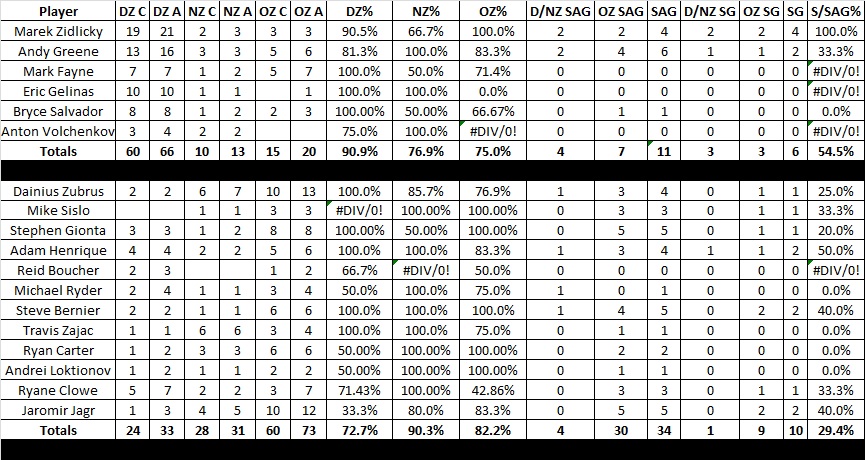 Forwards: Only a 44.0 PE%, which was a good 5% lower than their average thus far. As effective as they were on their OZ passing, the CBGB line had it rough exiting the zone. 5 total turnovers for the forwards. Ryane Clowe was the best forward with 7 attempts and 5 with possession.

Defensemen: Only 33 attempts on the night, for a very strong 57.6 PE%. Greene led the way with 10 attempts, with half of the possession variety. Salvador and Zidlicky were the lowest, but even they weren’t terrible at 42.9%. 4 turnovers by the defensemen on the night—still not great, but an improvement over recent games. Salvador’s turnover was the most visible and costly. 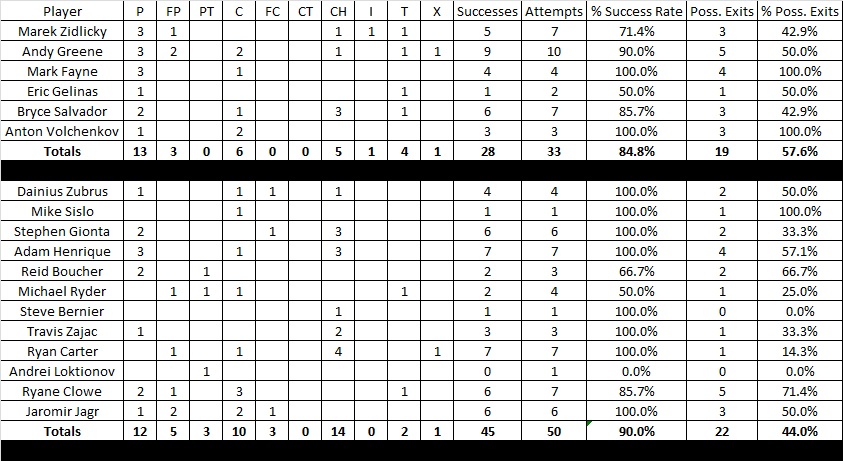