This is a review of the New Jersey Devils' zone exit and passing stats for their 46th game of the season against the Florida Panthers. In an entertaining game, read on to find out how the Devils excelled and where their could have been better.

In a game that felt similar to the Dallas game, the Devils traded opportunities with Florida all night long. The goalies were up to the task and it took a sublime effort to win it in overtime. The Devils finished strong on their zone exits and shot generation, but were a bit wasteful with their passing that makes you wonder if they could have put the game away earlier with more precise passing. Let’s get to it.

The team’s passing accuracy was not up to par compared to its season averages. Dainius Zubrus was under 66.7% completion in all 3 zones, but still found a way to finish with 4 SAG and 3 SG. Travis Zajac was a bit off as well, completing 11/17 with 3 SAG and 1 SG. Jaromir Jagr, on the hand, was more accurate than usual as he went 16/20 with 5 SAG and 1 SG.

Mike Sislo completed 3/4 passes on the night, but with limited minutes wasn’t able to generate much offense. Reid Boucher went 6/9 with 2 SAG and 1 SG. You have to think they’d be able to consistently produce more if the team rolled 4 more lines.

Another game with average SAG production from the blue line. Marek Zidlicky, Andy Greene, and Mark Fayne each generated 2 shot attempts, with Zid and Greene each generating 1 shot. Collectively, the defensemen attempted fewer passes in each zone than they’ve averaged on the season. Zidlicky was the busiest on the night: 22/27 across all three zones. 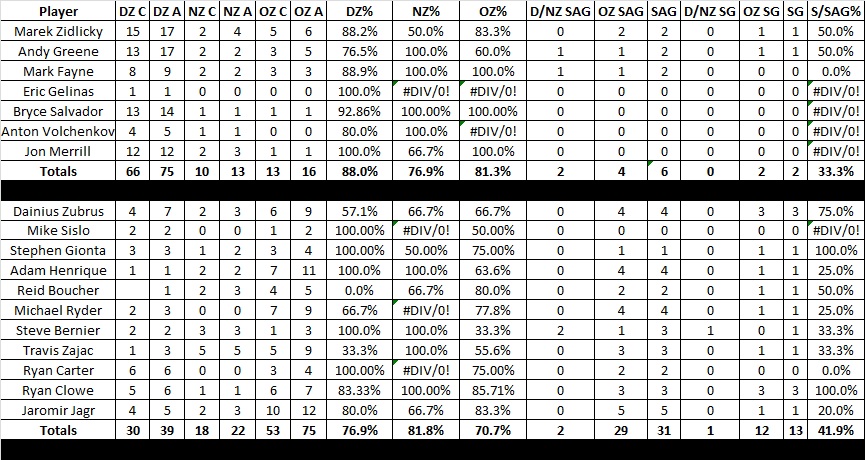 Zubrus (46.2 PE%) led the team in exit attempts with 13 and overall the forwards exceeded their season average by 2 exit attempts. Gionta had a decent night, ending up successful on each zone exit and 4 of the 5 keeping possession. Ryder (50%), Bernier (66.7%), Zajac 16.7%), Carter 66.7%), and Clowe (83.3%) each attempted 6 zone exits, with varying amounts of possession exit success rates. 8 of Jagr’s 9 zone exits were with possession as he continues to perform very well by this metric. 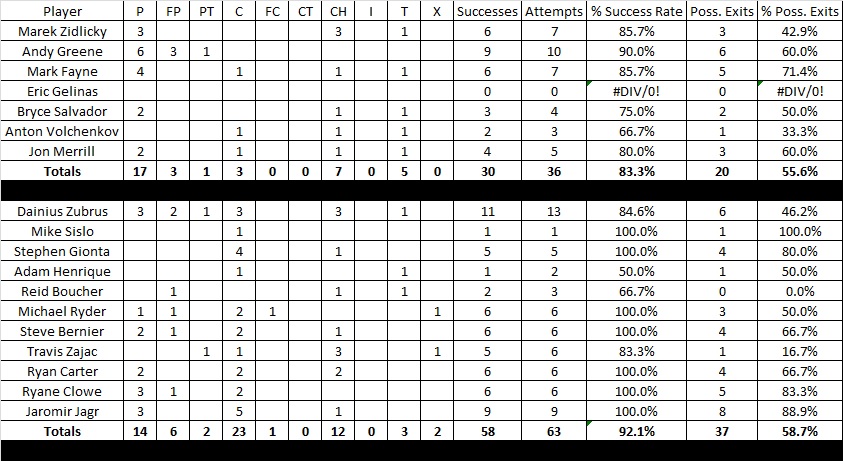