This is a look a the zone exit and passing stats for the Devils' 45th game of the season against the Stars. It was a back-and-forth game, with each team enjoying periods of strong possession. Read on to see how the Devils skaters stacked up.

In a game the Devils very much owed to Cory Schneider for the victory, they didn’t do him any favors at times in their own end. 13 total defensive zone turnovers often led to a flurry of shot attempts for the Stars and sustained zone time. As a result, the zone exits were not a strong point for the Devils. However, the passing accuracy for the team was above its averages on an overall basis, so it was hit or miss on the Devils’ passing. They generated a decent amount of attempts, and the one goal, but it was an up-and-down performance. Let’s get to it.

Stephen Gionta was a bit busier in all 3 zones than normal against Dallas. He only generated 1 shot attempt. As his ice time was limited, Mike Sislo only attempted 1 pass in the offensive zone, but failed to complete it. Dainius Zubrus only completed half of his 8 offensive zone pass attempts, but still managed to generate 3 shot attempts and 2 shots.

Adam Henrique and Travis Zajac continue generate offensive as the team’s top two centers. Henrique completed all 13 of his passes, with 3 SAG and 3 SG. Zajac went 16/18 with 4 SAG and 2 SG. Reid Boucher completed all 6 of his passes, generating 2 shot attempts and 2 shots. Boucher’s passing had been inconsistent, so it was good to see him have a solid passing game.

Steve Bernier continues to be a shot-generation machine: he went 9/10 overall, with 6 SAG and 4 SG. Once everyone’s healthy, wouldn’t a 4th line of Boucher-Loktionov-Bernier make everyone feel better? That would be a solid, offensive 4th line.

Ryane Clowe had a solid night, completing 19 of 21 passes with 3 SAG and 3 SG. Jaromir Jagr went 16/22 with 4 SAG and 1 SG. Michael Ryder had a decent game passing game, though we know he’s more of a shoot-first guy; he still finished 11/14 overall and generated 2 shot attempts and 1 shot.

The defensemen haven’t been generating a whole lot of shot attempts as of late, with only 6 more today (4 of which resulted in actual shots). Mark Fayne and Eric Gelinas were the only blue liners who failed to generate at least 1 shot attempt. Gelinas was once again a bit shaky in his own end (7/12), with no other defenseman completing fewer than 81.3% of their passes in the defensive zone.

Jon Merrill completed each one of his 14 passes across all 3 zones. Anton Volchenkov and Bryce Salvador each only misfired on 1 pass attempt. Marek Zidlicky and Andy Greene were the busiest defensemen on the night, each attempting 21 passes, completing 17 and 15 respectively. 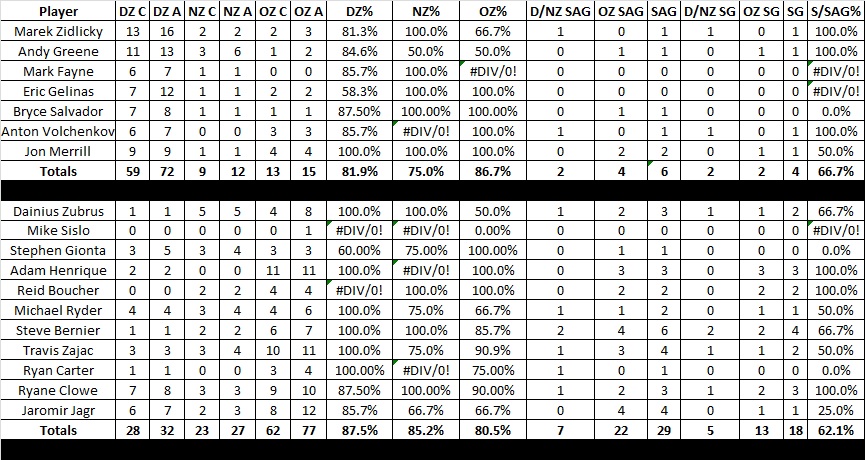 Similar to the defensemen, there were a number of turnovers by the forwards against Dallas. No one forward was responsible as they were spread out between Zubrus, Boucher, Carter, Clowe, Jagr, and Gionta (who had 2). Overall, the forwards finished right at 50 PE%. Clowe attempted 9 exits, maintaining possession on 7 of them. Gionta attempted the same number of exits, but only 2 maintained possession. Jagr led the team with 12 attempts, but he was a little off, as only 5 were of the possession variety.

6 total turnovers limited the defensemen’s effectiveness at exiting the zone with possession. Zidlicky was the worst offender with 3 turnovers via his passing. Fayne, Gelinas, and Merrill each committed 1 turnover. There were also an unusually high number of icings (7) for 1 game. Greene and Zidlicky had just about half of the total exit attempts for the defensemen and finished at 50 and 45.5 PE% respectively. Gelinas, Salvador, and Volchenkov really brought the group’s percentage down. 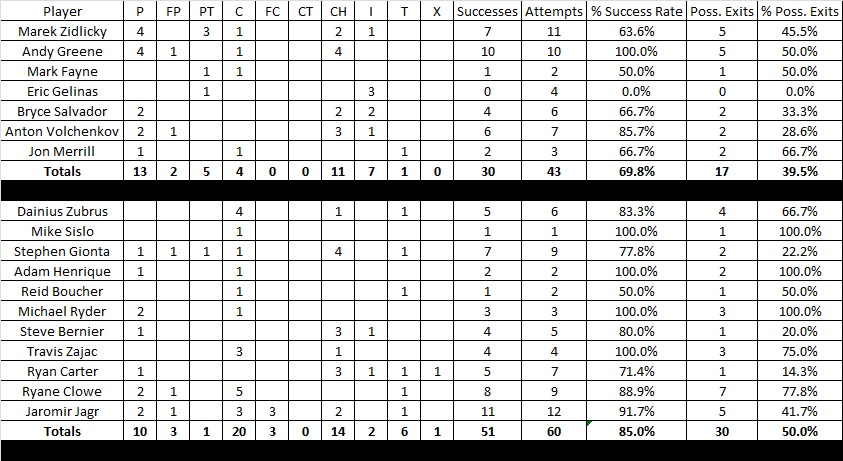