This is a look at the Devils zone exits and passing stats for the 41st game of the season against the Penguins. Quite simply, it was a game dominated by the Devils forwards at both ends of the ice.

The Devils took on the Penguins and came away with a well-deserved 2-1 win on New Year’s Eve. The defensemen attempted their fewest zone exits of the season and were below their season average in passes in the defensive zone. The forwards were active all over the ice as they picked up the slack in terms of zone exits and passes in the defensive zone. Even after losing Patrik Elias, the top two lines for the Devils were especially efficient in terms of shot generation. Let’s get to it.

With these two lines, I’d like to see a 3rd line of Elias, Andrei Loktionov, and Reid Boucher/Steve Bernier once Elias comes back. Throw in Damien Brunner once he returns and this team is as deep if not deeper offensively than the 2012 team…if Deboer doesn’t mess up the lineup of course.

While they were about 20 passes below their collective average in the DZ, the defensemen met their average in the other two zones, and generated 9 attempts and 4 shots. Marek Zidlicky generated 4 attempts and 1 shot while completing 15/18 passes. Andy Greene generated 2 shots with his 2 attempts on 17/20 passing. Jon Merrill was the busiest in the Devils own end, but finished 21/22 with 1 shot generated. Bryce Salvador had the weakest passing game as he only completed 7/13 passes. 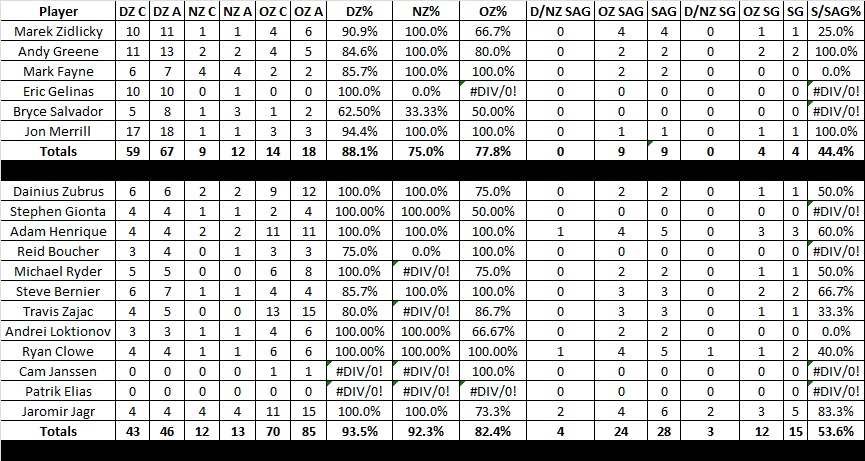 Since the defensemen’s exits were so low, the forwards picked up the slack and attempted 66 zone exits. They still finished at 57.6 PE%. Boucher attempted the most with 12, yet only 4 maintained possession. Bernier (42.9 PE%) and Zubrus (40 PE%) were the only other Devils under 50 PE%. After Boucher, Ryder attempted 10 exits, completing all 10 with 7 maintaining possession. As in the passing stats, this game belonged mostly to the forwards. 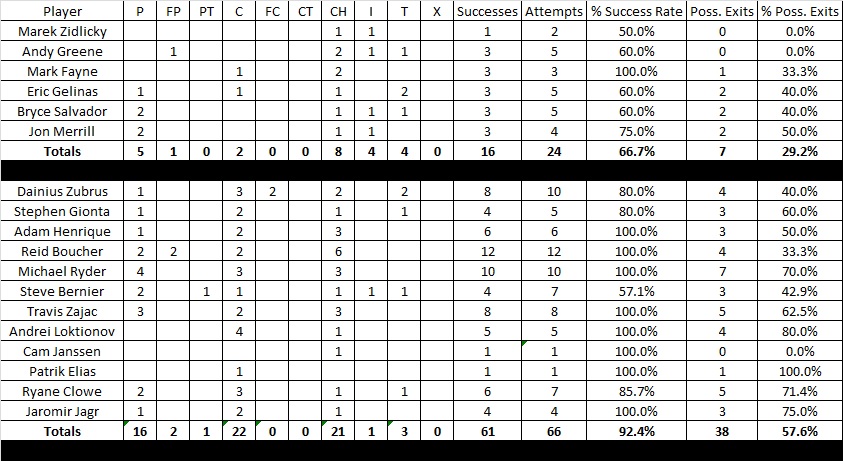