This post takes a look at how the Devils spend their money at each position and how it has changed over the last five seasons.

Every NHL team has two objectives at the beginning of every season. Those objectives are to win and make a profit. Not every team is identical in the way they treat these two objectives. Some teams choose to spend crazy amounts of money to win, Minnesota Wild, New York Rangers, Pittsburgh Penguins. Other teams choose to sit back and spend just enough to be over the cap floor and field a somewhat competitive team: New York Islanders, Florida Panthers. These teams put business first and winning second. Then there are the rest of the teams that attempt to mix winning with profits.

These two motives led to the implementation of a salary cap beginning during the 2004-05 season and likely continuing on throughout the life of the NHL. Ever since the salary cap was implemented, teams have had to carefully choose how to spend between the salary floor and the salary cap.

The Devils have consistently been in the top half of the league in the amount spent. However, this year the Devils have the 6th most amount of cap space available. The Devils have yet to sign Adam Henrique, but other than that, they are likely done with their offseason moves. So this got me to thinking, how do the Devils spend their money? I took a look at the last six years of Devils' salaries and found a few trends worth sharing.

The Devils spending at defense has increased from 26.5% of total salary during the 08-09 season to 31.3% this coming season. The highest paid Devils' defenseman in 08-09, Paul Martin at $4 million; in 13-14, it'll be Anton Volchenkov at $4.25 million. A lot has changed on the Devils blue line with only Bryce Salvador and Andy Greene still being on the Devils. Other than that, the spending on defense has been fairly consistent. Below is a chart that shows spending by position for the previous six years. 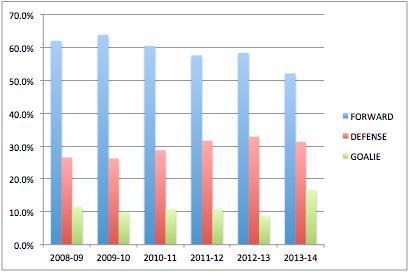 The goalie situation has been even more consistent than the defense. With Martin Brodeur being as consistent as he is, the Devils only needed to sign a decent backup to ride the pine behind #30. Between 2008 and 2013, the Devils spent 8.8 to 11.5% on their goaltending pair. However, since Brodeur is getting ready to retire, the Devils picked up Corey Schneider and his contract. That bumped the Devils goaltending salary up to 16.7% of their spending. That's a significant amount more than the Devils have spent in the past. This means that the Devils have less to spend at other positions. If you look at the data below from the last two seasons, you can see that the increase in goaltending spending was taken mostly out of the spending at forward.

Three quarters of the increase in spending at goaltending came out of forward salaries while the rest came from defense. The Devils already had one of the worst offenses in the league this past season, so this could spell trouble, unless Lou found some deals.

Overall, spending has decreased compared to other positions on the team. The 2009-10 team used 63.8% of its salary to pay forwards, the most in the previous five seasons. This upcoming season, the Devils will spend the least amount at forward at only 52.1% of their salary. Not a whole lot else can be ascertained from this, so I broke it down even further to wingers and center.

Spending at LW was the biggest portion of money spent on forwards from 2009 through 2013, mostly due to Ilya Kovalchuk and Zach Parise. However, both of them have left the Devils, causing the decrease in 2013-14. Spending at center has been consistent except for 2009-10. Spending at right wing has been inconsistent as the Devils have had high turnover at right wing the last few seasons.

In the past the Devils have been fairly consistent in their spending habits between forward, defense, and goalie. Next season looks significantly different than the last few as the forward and goalie situation has changed drastically. There is one outlier as the Devils still have yet to sign Henrique to a contract. It would be interesting to compare the spending trends across teams and different conferences, but compiling that data would take much longer. How does everyone feel about the Devils spending patterns? Do you think this is going to be a permanent change or is this season an outlier?