Looking Forward to the 2014 Offseason

This post takes a look at what the Devils will have to do next year to field a team for the 2014-15 season.

Share All sharing options for: Looking Forward to the 2014 Offseason

According to the calendar, summer is just about over. Many of us are either going back to school or realizing that we never quite got in shape enough to go to the beach. Fortunately for us, cold weather is right around the corner, as well as an NHL season. This means that most NHL teams are done with their big offseason moves and are starting to change gears towards training camp and the preseason. While everyone else is looking at potential battles for spots on the Devils roster, as well as possible debuts, I'm going to look into the future. The Devils had a tumultuous offseason where they overhauled their roster and lost an elite forward to "retirement". The Devils also began the inevitable transition in goal. If that wasn't enough change, the ownership situation was resolved for the foreseeable future. So, where does that leave the Devils for the next offseason?

I'm not sure exactly what defines core players, but for the purpose of this article we will call the core of the team the players that are signed for multiple season or that will likely resign. In short, these are the players that Lou should build around.

This doesn't include two players who are signed through next season: Michael Ryder and Peter Harrold. I don't see Lou resigning either of these players, so they will most likely not be around for the future of the team. Looking at these core players, I still feel that the Devils lack a true number one scorer. Patrik Elias is aging and if Henrique doesn't return to form, the Devils will struggle to score in the future. The Devils do have a high scoring prospect in Reid Boucher, but it's still a little early to tell if that will translate to the NHL level. Now let's move on to the UFA's for the Devils next offseason.

The CBGB line in its entirety is up for free agency, I would hope Lou signs them on for another season or possibly two if they are still effective. Other than that, I'm OK with Barch leaving via UFA and I'm not sure about Olesz just yet. On defense, Mark Fayne and Marek Zidlicky both are serviceable defenseman. However, the Devils have a lot of defensive prospects that should get their respective shots at the NHL in the next two years. So I would assume we will see quite a turnover on the blue line next offseason, maybe even this season. As for Marty, my bet is that he retires this season and the Devils need to look for a backup goaltender in the next offseason for Cory Schneider.

For Josefson and Tedenby, this is the year to prove you belong on the NHL roster. Tedenby has struggled and Josefson just can't seem to stay healthy long enough to prove himself. Other than that, Loktionov is a promising RFA who could become part of the core if he has a good season. On defense, Adam Larsson is still developing and Lou will most likely attempt to sign him up for the long-term.

As you likely noticed above, I haven't included players who have yet to play a significant amount of time in the NHL. I mainly did this because they are question marks when it comes to roster spots. Rather than list all the players, below is a picture of Capgeek's "non-roster players". 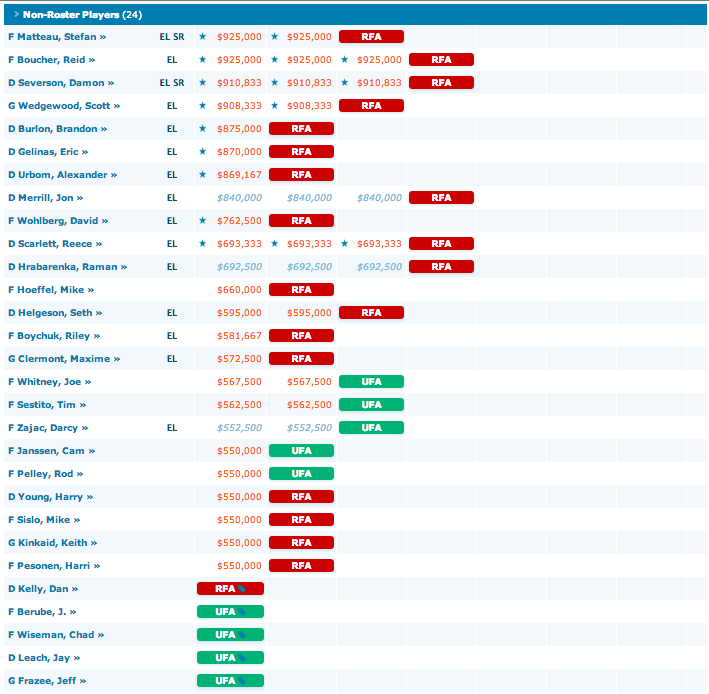 There are 11 players who will become RFA's next offseason and two UFA's. This isn't good news for the Devils as they don't even have a first round draft pick during the next draft.

Overall, the Devils will have a few holes to fill in at each position. At offense, they will likely need to dip into the UFA pool next offseason. At defense, they have up and coming players who will fit in nicely. At goalie, they will need to sign a backup as the goalies in their system aren't ready for the NHL quite yet.