Without David Clarkson or Ilya Kovalchuk, Would Their Devils Teammates Suffer in Possession?

Two of the biggest departures from the New Jersey Devils this summer were David Clarkson and Ilya Kovalchuk. As the 2013-14 season approaches, would their absence hurt their teammates in terms of possession? We look at their WOWY charts to figure it out.

Share All sharing options for: Without David Clarkson or Ilya Kovalchuk, Would Their Devils Teammates Suffer in Possession?

One of the best features at Hockey Analysis are the easily accessible with or without you (WOWY) charts. While possession is approximated by difference in shooting attempts - Corsi includes all of them, Fenwick are attempts without blocks - one of the confounding factors is that a player doesn't do it alone. They're not alone out there. Hockey is a team game, after all. A skater will always have four teammates on the ice in the most common situation at even strength. Over a whole season, a player with a high rate or percentage would suggest he was good for possession. But a WOWY chart would highlight not only who he's played with and how well he's done with them; but also how well possession went with that teammate and by that teammate apart from the player. We can determine not only who was really driving the bus, but find evidence of a good or a bad pairing.

Thankfully, Hockey Analysis makes it easy to access these types of charts. The site not only had individual 5-on-5 data for each player, but also easily accessible WOWY charts. Even better is that you can access them for a particular season or for up to five-season blocks. The latter is especially helpful for players who have been with a team for several seasons. It just so happens that there were two now-former New Jersey Devils who left the organization this summer. One of them was David Clarkson, who signed a massive deal with Toronto and apparently bleeds blue according to this cover of The Hockey News. One of them was Ilya Kovalchuk, who stunned everyone with a voluntary retirement to go play with SKA St. Petersburg. Both are no longer Devils, but we can look at their WOWY charts to see which current Devils may miss either player in terms of possession.

Let's start with Ilya Kovalchuk. The group I chose for him runs from 2009-2013 since the Devils acquired him in the 2009-10 season. I excised out the Thrashers and included players who played at least 300 minutes with him in 5-on-5 situations. Fifteen Devils, including six no longer in the organization, met the 300 minute mark. Those not in the organization are highlighted in grey. 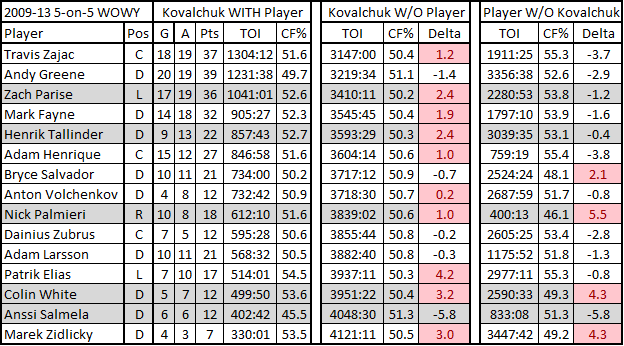 Those deltas are the difference between the With and Without Corsi For percentages. Those numbers in red represent reductions. Those under "Kovalchuk W/O player" mean that Kovalchuk's Corsi For percentage was better with the player than without him. Those under "Player W/O Kovalchuk" means that their Corsi For percentage was better with Kovalchuk than without him. A quick glance shows that Kovalchuk really did lean on others to put up good percentages, whereas most of these teammates were actually better in possession without him. His most common teammates, Travis Zajac, Andy Greene, and the departed Zach Parise, better drove the play forward without #17. The only current Devils to have done worse in possession away from Kovalchuk were Bryce Salvador and Marek Zidlicky. Salvador doesn't drive possession, but Zidlicky really sticks out considering he's been quite good in this department with New Jersey. Zidlicky just made this list in terms of minutes played and Kovalchuk suffered without Zidlicky too. More time would have showed whether they were truly a beneficial pairing.

Curiously, Kovalchuk never finished below 50% away from any of these 15 most common teammates so he wasn't completely lost. Given that a player always plays with someone, it could be that his teammates were often superior enough to keep him above water, so to speak. It also didn't help that some of those fewer minutes with others were just went poorly in some cases. Kovalchuk was often double-shifted with fourth liners who weren't good at possession as games went on, especially within the last two seasons under Peter DeBoer. He just couldn't drive them up; that's not what he does. Kovalchuk wasn't a Jack-Johnson-esque hole either as he did finish just over even (50%) at 50.8% Corsi percentage from 2009-13, Atlanta included, according to Hockey Analysis. But all that means is that the Devils attempted gave out few more attempts than they face when he was on the ice. Overall, I think most of the Devils who have played with Kovalchuk for a significant amount of ice time at evens will be fine without Kovalchuk from a possession standpoint. I think he'll be missed in other areas.

What of David Clarkson, who boasted a ridiculously high on-ice Corsi percentage in 2013? To find out, I took the largest group available that would include the 2013 season, so I pulled data from the 2008-13 group at Hockey Analysis. Given that Clarkson only played seven games in 2006-07 and his first full season in the NHL was in 2007-08, this time period would be appropriate. The same parameters apply, but there are more players that played at least 300 minutes with Clarkson. This is because Clarkson really was a bottom-six player up until this past season and so his linemates varied. He was still a positive player with a 52% Corsi For percentage from 2008-13. 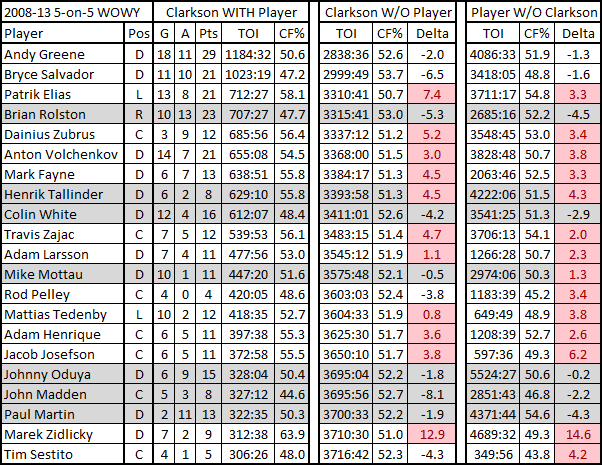 Twenty-one players played alongside Clarkson for at least 300 minutes in 5-on-5 play over the last five seasons and fourteen of them are still in the organization. The effective number may be closer to twelve or eleven. I don't think or hope Rod Pelley or Tim Sestito will see the ice enough to make a difference, but they were both players who suffered without Clarkson, while Clarkson did better in possession without him.

Those two are exceptions to the common case where both Clarkson and his teammate suffered in possession apart from each other. Those who are no longer Devils applied aside, only Andy Greene and Bryce Salvador did better in possession without Clarkson than with him. Likewise, Clarkson did better without either of them behind him in 5-on-5 play too. I suppose they weren't good fits over the seasons, which is unfortunate since they played as much as they did together. I'm not entirely sure what to make of the common finding here. It suggests to me that Clarkson played some role in terms of putting up a positive possession percentage. But the fact that Clarkson also suffered without them suggests he wasn't really a driver. Perhaps he's more like a catalyst that boosts each other up. Again, the actual percentages tell the tale of who's going to miss him more. Someone like Zajac or Patrik Elias who have been very good without him won't miss him as much as someone who's closer to breaking even like Adam Larsson, Jacob Josefson, or Marek Zidlicky. Even so, while many Devils players who played quite a bit with him were worse off without Clarkson in New Jersey, Clarkson could very well miss them just as much.

Of course, there's a giant caveat for both Clarkson and Kovalchuk and it's clear in the time on ice (TOI). Even though both players were Devils for multiple seasons, common teammates don't play all that much with each other. For example, from 2008-09 through to 2013, Kovalchuk's most common teammate was Zajac. The two played just over 1,300 minutes together in 5-on-5 play. Kovalchuk played close to 4,500 5-on-5 minutes in that same time frame, so Zajac was only with him for just under 29% of the time. That's a small sample of events occurring both for and against within a much larger population. Both played much more apart than together. While that time is also confounded by other teammates, there is much more of it that reduce the effect. The hope is that much time is enough to determine whether a match-up worked or not; but the truer values may lie without each other than with each other. Since I chose a cut off of 300 minutes of 5-on-5 time, there's a large list of teammates who didn't make that mark that represent a significant percentage of each player's ice time in New Jersey when combined. That would have an effect on Kovalchuk's and Clarkson's overall Corsi For percentage among other stats.

Therefore, I would not conclude anything definitive on just the WOWY charts alone, though there are suggested conclusions for both. The Kovalchuk WOWY chart from his time as a Devil suggests that from a possession standpoint, . Clarkson's WOWY suggests that his departure may have a larger effect on more players, but it could cut both ways. (Sorry, Toronto.) If they are missed, it may be in other areas (e.g. the power play). We want Corsi For percentage to be high since anything above 50% means the Devils are out-attempting their opposition in 5-on-5 hockey. Many current Devils were still above that mark without either player so there's reason to believe that Clarkson and Kovalchuk playing elsewhere won't doom the Devils in that regard. And that doesn't consider the possible impacts of new players. Regardless, most of the Devils coming out ahead in possession without either player is important as it's a mark of a good team. They usually are the ones who are positive in shooting attempt differential in 5-on-5 situations; dictating the play over and over is superior to just reacting to it. Of course, that's just one aspect. Just like man can't live on bread alone, a team can't win on possession alone. Just look at the 2013 team that included both Clarkson and Kovalchuk.

So what do you make of the WOWY chart for both players in general? What other WOWY charts would you think would be interesting to look into? Do you think the suggested conclusions make sense? Will the Devils miss both Clarkson and Kovalchuk, possession aside? Please leave your answers and other thoughts about how the upcoming Devils team will do without Clarkson and Kovalchuk in the comments. Thank you for reading.