The New Jersey Devils acquired Cory Schneider at the 2013 NHL Entry Draft in exchange for their first overall pick. While it's not a guarantee he will be great for the Devils, his current NHL resume suggests he will be an improvement at the position.

Share All sharing options for: Why Cory Schneider Should Be an Upgrade for New Jersey Devils in Net

On Sunday, June 30, the New Jersey Devils turned a ninth overall pick into an actual goaltender who's played in the NHL. They acquired Cory Schneider from the Vancouver Canucks essentially for Bo Horvat, the prospective forward the Canucks chose with New Jersey's pick. While the initial reaction to the pick was more or less a surprise, more and more Devils fans grew to like it as the day went on. I know I did, even as I was writing up a post about the trade.

Now that it's been three days since the trade, it's a good time as any to take a closer look at what Cory Schneider has done so far in his career. I did note on Sunday that he was Vancouver's starting goaltender last season and he did rather well. The good news is that it wasn't his first season in the NHL where he posted a very good save percentage. The bad news is that Schneider still hasn't played enough in the NHL to be fully confident that he will be a top goaltender. Mitigating that bad news is that current evidence points to Schneider being at least an above average goaltender. Here's his entire NHL career by the numbers available at NHL.com: 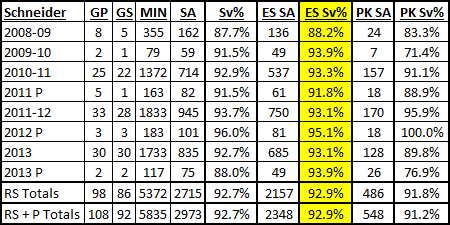 Judging goaltenders in the bigger picture comes down to save percentage: the number of saves made out of saves attempted. The highlighted column should draw your attention as it's Schneider's save percentage in even strength situations. Outside of his first taste in the NHL in 2008-09, he has been more than very good in the 2010-11, 2011-12, and 2013 regular seasons. In each of those three regular seasons, he's managed an even strength save percentage of over 93%. That puts him up with among the best in the league in that category. Bolstering his overall save percentages were some good penalty kill percentages, though those are usually in flux from season to season. He did do well enough then that he got some playoff action in 2011 and 2012 as well as cause Vancouver management to start playing games with Luongo. That was telling in of itself - both of Schneider's performances and Vancouver's approach to management.

Over his short NHL career so far, his high even strength save percentage should give Devils fans a reason to believe he should be a very good goalie. He might even be a great goalie. However, it's not a guarantee that he'll continue to be so great. In this post about AHL to NHL translations in save percentage by Stephen Cooper over at Habs Eyes on the Prize, he notes that to be confident about predicting future performance from a goaltender, the goalie would have had to face 4.000 shots. Schneider hasn't done that yet at the NHL. He's done it at the AHL level, where based on Cooper's translation, he was the equivalent of a 91.4% save percentage goalie - a level he's beaten in three straight seasons. But as Cooper noted, the AHL and the NHL are very different so apples should only be compared with apples. Even if we include his playoff performances in the NHL (the year with the P next to them), Schneider has yet to start in 100 games and is just under 3,000 shots. Therefore, it's still a bit hazy as to how good Schneider can be. While he was a starting goaltender last season, he was a back-up in prior seasons and perhaps got better match-ups, which could help his numbers.

That said, I don't think he's suddenly going to turn from a Carriage of Stops to a Pumpkin of Pitifulness. I doubt a goalie, especially a 27-year old who's only appeared in 108 games, can put up great numbers in three separate seasons in a row and then come up lame for the rest of his career. It just means that we shouldn't expect and demand him to earn a 93% or better save percentage at even strength or an overall save percentage close to 93%. Schneider should hit that 4,000 saves attempted plateau in this coming season provided he plays a significant number of games. Schneider is signed through the 2014-15 season, so by the time the Devils can possibly given him a contract extension, they'll have enough data to figure out how valuable he really should become and what kind of contract to offer him.

As this upcoming season takes place, you should pay attention to how Schneider plays as well as how often he does play. You'll notice that he's different than Brodeur. Schneider is a butterfly goaltender, something the Devils really haven't had slated for a significant role for quite sometime. Here's an instructional video describing the style, which shows how much is involved in the style. Brodeur's style doesn't rely on the butterfly stance, as he doesn't consistently and constantly drop down to stretch his pads out along the ice. While this has helped him at times, he has been beaten low on occasion where a butterfly stance would've stopped the shot. Of course, there will be occasions where a butterfly goalie would be beaten but Brodeur would stop it. Given that Schneider has put up some great save percentages so far in his short time in the NHL, the Devils coaches shouldn't force him to change. The fact that he plays a different style will also help highlight that Schneider isn't Brodeur, which will really help his expectations to a small degree. I expect to see Schneider play in that same style as he has been very good so far even with his limited action. I just don't expect him to be a top-ten goalie right away.

That all said, even with the caveat about how many games and saves Schneider has played, the numbers suggest that the Devils got better at the goaltending position. Johan Hedberg wasn't good last season. While Martin Brodeur put up an even strength save percentage that's around league average, he was below average in the last two full seasons he played in. Even if Schneider is a full percentage worse at even strength or overall than he was as a Canuck, he'll be better than Brodeur, who hasn't always been the same Brodeur he once was. Schneider is more than just a transitional goaltender; he'll bring improvement at that end of the ice. I think we can be confident that Schneider will help in the Devils' quest to get back into the playoffs next season even if more time is needed to really be confident of what he'll be for the Devils. Lastly, I think he is very much worth a ninth overall pick.

What do you make of Cory Schneider now that you know a bit more about what he's done at this level? Do you think Cory Schneider will play as well in New Jersey as he did in Vancouver? Will he be average, above-average, or much more than that? Please leave your answers and other thoughts about Schneider in the comments. Thank you for reading.