The New Jersey Devils were an old team last year. This offseason hasn't made them any younger. So is the Devils' age a number we should be worried about?

Share All sharing options for: Hoping Age is Just a Number for the 2013-14 Devils

Yesterday's news of the Devils agreeing to terms with Jaromir Jagr set off a lot of discussion on how big of a concern the Devils age will be next season. Many people, myself among them, were hoping for a fresher set of legs than the 41-year-old future hall-of-famer. Part of the reasoning is that NHL players tend to peak in scoring during their mid-twenties (with some exceptions), and typically decline production-wise once they are past 30. As currently constructed, the Devils' roster relies on a lot of players who are on that downslope to provide a majority of their goals. Are these concerns about the Devils' age somewhat overstated, though?

Over at Quanthockey, there is a very well-done feature on the ages of NHL teams and players. The ages can be broken down by position, playoffs/regular season, and simple and weighted averages. Perusing through the charts, you can glean a lot of good info on the ages of teams and the NHL in general. For example, the current (2012-13) average age, weighted by games played, for NHL forwards is 27.6, the average for defensemen is 28.0, and the average for goalies is about 29.4. So where do the Devils land in relation to those averages?

When calculating the Devils ages for the 2013-14 season, I took their age as of December 31 of the upcoming season for the purposes of averaging them. It's not quite as precise as the Quanthockey calculations, which take ages down to the date, but it shouldn't affect the average ages by any more than a tenth or so.

The Devils' forwards are a pretty old bunch, overall, with an average age coming in at a tick over 30, about 2.5 years older than the average NHL team's weighted average. Depending on how the roster shakes out, this number could be higher or lower, but it will almost certainly be well above the NHL average. On the surface, certainly a bit of a concern that the average age projects to be over 30.

The age of the average defenseman has typically been (though not always) a little bit higher than that of the forwards and over the past decade or so, has settled in around half a year older. This seems intuitive, as defenders rely a little less on speed to keep up their games than their forward counterparts.

So, as I think most of us already knew, the defensemen are not so young, themselves. As currently configured, they are even older than the forwards. This number is certainly subject to change, though, if the defensive youth movement that Lou has been talking about ever materializes. Subbing in a player like Gelinas, Urbom, or Merrill for Volchenkov or Salvador brings the Devils much closer to the league average for defensemen, so it's possible this outlook is a little different on opening night. Still, if the Status Quo™ upholds, then the Devils will begin their season with one of the older defensive corps in the league.

The average age for goalies in the NHL is higher than that of the skaters by a decent margin. For obvious reasons, a team's goaltending age would seem to be much less of a concern, as results are much more individualized . Still, it's worth a look.

As I'm sure most of you were able to deduce on your own, the Devils goaltending got younger in the offseason. Still above average, but more of the "regular old" variety instead of "hilariously old." Again, like I mentioned, there's not a huge issue with goalie age (you can have a good old goalie as easily as a lousy young one), but as Marty has shown, there is a bit of injury concern with age, so it's nice to see that number settle in a little further away from 40 this year.

So What Does This Mean for the Devils?

Here's the point in this piece where I, unfortunately, don't give you much of a definitive answer. I will say that looking at some of the stuff from Quanthockey has me feeling a bit better about the outlook of an old team. Take the average age of NHL teams this past season: 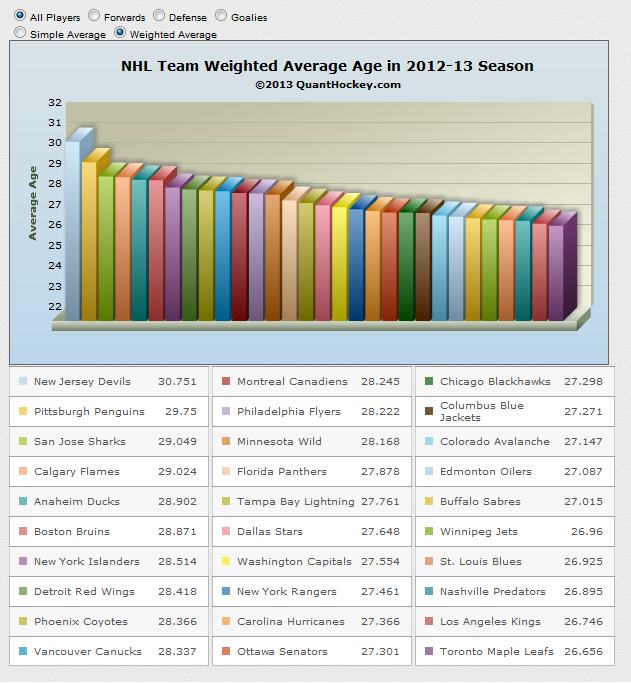 As you can see, the Devils out-olded everyone else in the NHL this past season (they project a bit lower this season at 30.5). And while it didn't really work out for them, there are seven playoff teams out of the rest of the top ten. Now there are certain caveats here, such as the fact that teams who are in contention are more likely to buy at the deadline, but overall, this indicates that the age of a roster isn't so important as its construction.

In fact, if you peruse the all-time team age list over at Quanthockey, you will recognize that there are a bunch of pretty good teams hanging out near the top of that list. The Red Wings of the past decade are featured prominently among the top 20 ('02 and '08 cup winners are 7th and 3rd oldest all-time, respectively). And while that is likely due to some of the "I want to go to Detroit to win because I'm old and that's what old people do" situations over years, it still remains as proof that a roster won't be bad just because it's old. Having an older team means that, while you are more susceptible to players declining with age, you also likely have a roster filled with proven NHL players. A roster which relies on a lot of young players filling holes, while probably speedier and with more players entering their prime, runs the risk of those players not being legitimate NHL-caliber pieces. The sword cuts both ways.

So, I guess my takeaway would be not to get too hung up on age. It's a concern, but not a death knell by any means. We should certianly be weary of the ages of the Devils skaters, as that means there is a lot of risk for injuries/declines, but it's not the end of the world that much of the roster has already received their AARP card. The key is whether the Devils did enough to fill their roster needs for next season, regardless of the age of the team.