Metropolitan Division, How do the Devils Stack Up?

Share All sharing options for: Metropolitan Division, How do the Devils Stack Up?

There are new divisions in the NHL, and the New Jersey Devils are in Division "D". EDIT: It was announced today that this new division will be named the Metropolitan Division.... While everyone has known about the new division for quite some time, we finally have a clear picture of the divisional opponents' rosters. This will allow us to speculate like crazy about how the new division and the outcome! However, before we get to the fun part, let's look at the new structure of the NHL and how this affects the Devils.

Once 2013-14 rolls around, the Atlantic Division will be joined by the Washington Capitals, Columbus Blue Jackets, and the Carolina Hurricanes. This cluster of eight teams will make up the entirety of Division "D". The other division in the Eastern Conference will consist of eight teams as well. The Western Conference will have two seven team divisions to round out the NHL. Below is a geographical picture of what this new format will look like. 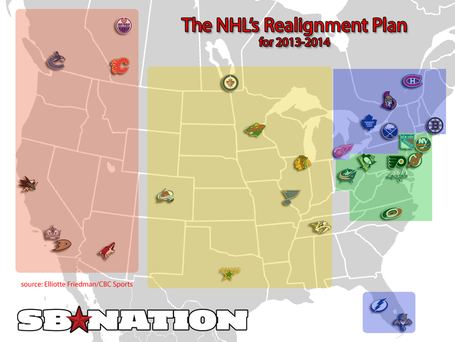 The addition of three relatively close teams will keep the season's traveling to a minimum for the Devils.The new season structure also means that the Devils will see less of the Atlantic Division teams than in previous years. The Devils will play two teams in the division five times and play the other 5 teams four times. However, all 30 NHL teams will play in Newark this season. So for Devils fans dispersed across the nation, the Devils are coming to a town near you! However, the Devils will have to be the best in the division to make it to the Stanley Cup. Below is an excerpt from the NHL's press release about the new playoff format.

"The top three teams in each division will make up the first 12 teams in the playoffs. The remaining four spots will be filled by the next two highest-placed finishers in each conference, based on regular-season points and regardless of division. It will be possible, then, for one division to send five teams to the postseason while the other sends three.

The teams finishing second and third in each division will play in the first round of the playoffs. The winners of each series will play for berths in the conference championship series.

The winners of the conference championships advance to the Stanley Cup Final."

Essentially, this means the Devils will have to be better than everyone in their division to be successful in the playoffs. How tough of a challenge is this? Let's look at the teams the Devils will face for 30 games a season and see how they stack up.

Below is a chart showing how well each team did last season as well as 2011-12. I also showed the record against the division. This will help us get a better idea of how these teams performed the last few years.

If you look at the record versus the Atlantic Division you can see that the Devils, Rangers, and Penguins all fared well against Atlantic teams. The Blue Jackets havn't played the division much since they were a Western Conference team. The other new teams to the division, the Hurricanes and Capitals, also struggled against the strong Atlantic Division teams. However, this graph doesn't take into account the changes that have been made this offseason to these teams. So click on the link below for all the offseason moves for each team.

The offseason isn't over, so hopefully the Devils will make some moves that will bump them up this list. I have the Devils at fourth because I believe they are going to struggle to put up goals. If their defense improves from last season and the goaltending tandem of Brodeur and Cory Schneider are used correctly by DeBoer, The Devils could move up to 3rd on this list.

The Future of Division D and the Devils

With a new division come new rivalries! Devils fans are already familiar with the Hurricanes and Capitals, but the Blue Jackets are something new. They almost feel like the new Islanders, a team that may always toil at the bottom of a very strong division. Perhaps they will prove that statement wrong? They did add quite a few piece this offseason, but as of right now, they don't feel like a division opponent. On the other hand, the Hurricanes are a team I feel many Devils fans loathe. Mainly because of the 2009 playoff series in which the Hurricanes scored two goals in the last 2 minutes of game 7 to eliminate the Devils.

Given all this change, I believe the Devils will be competitive in this division for a long time. They have always done well against the Atlantic division and they will keep that up with the addition of three new teams. What do you think about the new division and the playoff format? Think the Devils have less of a chance to make the playoffs? Also, who do you foresee becoming a new rival for the Devils? or will it take some time to develop animosity toward another team?