Beyond 21: Why the New Jersey Devils' Marginal Signings Matter

The New Jersey Devils have made several signings for players who will start in the minor leagues in addition to having several defensmen prospects in Albany. Will we see them in New Jersey? History says we likely will.

Share All sharing options for: Beyond 21: Why the New Jersey Devils' Marginal Signings Matter

Hockey's offseason often consists of one big flash and some activity shortly thereafter before settling into the doldrums of the summer. That flash came last week from the 2013 NHL Entry Draft through Free Agency Frenzy last Friday. The New Jersey Devils were certainly active at trying to make their team better on draft day through the first day unrestricted free agents could be signed. It remains to be seen whether the team will be better but there's reason to be optimistic. Since then, the Devils have remained active by trading Henrik Tallinder for essentially cap space and re-signing Marek Zidlicky. The next "big signings" will be when Adam Henrique and Jacob Josefson get their new deals and that should take care of most of the major actions by New Jersey this summer.

However, the Devils have also been active in this past week with respect to minor deals. NHL contracts have been given to players who will likely start and mostly stay in the minors; those who are on the fringe of the roster at best. Based on CapGeek's list, Darcy Zajac has been given an entry level contract while Tim Sestito, Cam Janssen, and Rod Pelley have all been inked to two-way deals. They join Joe Whitney, who has received his first NHL, two-way contract far earlier this offseason. I've expressed my concerns about the signings of Darcy Zajac and Tim Sestito earlier this week and the same applies to Janssen and Pelley (though Pelley's probably the best player of the bunch). The Devils know exactly what they're getting and it's really not much. Today, I want to highlight why those deals matter. At the same time, I'll show why the Devils signing Zidlicky doesn't necessarily mean that none of the Devils defenders down in Albany won't see anytime in New Jersey.

While the Devils can keep up to 21 skaters on an active roster and play 18 in a game, the Devils have used far more skaters in the past. And based on that past, it's safe to assume that they'll use more in this coming season and beyond. Based on the stats kept at NHL.com, here's a count of the number of forwards and defensemen who suited up for the Devils in each of the last 15 seasons. 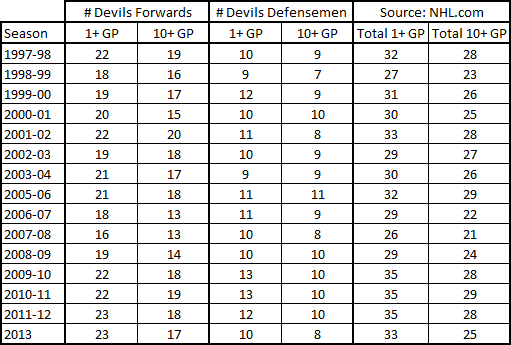 In the last 15 seasons, the Devils have had at least 16 forwards and at least 9 defensemen to have played at least one regular season game. They have had as many as 23 forwards and 13 defensemen to do the same. In total, the Devils have averaged roughly 31 skaters to put on the New Jersey uniform for at least one appearance over the years. Even in their leanest season, 2007-08, they still had iced 26 players, five more bodies than an active roster would allow. That's several different guys beyond the starting lineup they had out of training camp.

If we look at players who appeared in at least ten games (about 12% of an 82-game season), the Devils still often used more than 21 skaters throughout the season. The range of forwards was 13 through 20 and defenemen ranged from 7 through 11. Only in one season did they have the maximum active roster limit for skaters, 21, to play ten or more games: 2007-08. In the other fourteen past seasons, they exceeded that 21 man mark. For the most part, the Devils have historically used 16-19 forwards and 8-10 defensemen for at least a significant portion of the season.

While, these counts do include players acquired during the season through trade and free agency, it does show how deep the Devils had to go from season to season. The larger point of all of this is that in nearly every season, the Devils had to call up players from the minors for one reason or another. It could be due to injury, replacing a player after poor performance, or wanting to give someone a shot at the league. This meant the Devils did have to recognize their 13th, 14th, 15th, etc. forward and their 8th, 9th, or even 10th defensemen and play them in games that count. Even if they were limited in those games, they still got minutes with the expectation and/or hope that they would contribute something positive. Therefore, those signings for who have been given NHL contracts do matter to some degree. They may be marginal signings, but the marginal guys hit the ice at some point. How much it will matter will depend on how severe the team will be hit by injuries. Historically, though, we should expect several of them to get minutes in 2013-14.

This is a silver lining for the defensemen who aren't the seven who played on the team last season. If the Devils don't make another move on defense and stick with seven with Zidlicky now signed, so it's easy to think that there's no room for a younger defender to cut his teeth in the league. But this look at history suggests otherwise. The Devils were fortunate with injuries on the blueline; not too many guys got hurt at once and there were always two defenders scratched to step in whenever necessary. Now that's reduced to one guy, which should make rotating players in and out easier. Should multiple injuries happen and overlap, then a real opportunity could come for Alexander Urbom, Eric Gelinas, and Jon Merrill to get some NHL minutes. That's all those guys may need to start breaking into the league, which is something that may need to happen real soon for Urbom and Gelinas. Short of some great fortune with defensemen injuries like in 1998-99, someone younger will be seen for more than just a token game at the end of the season. That's good for them.

The bad news is at forward. Since we know that Sestito and Janssen bring nothing to the table we know that we should only be pleased if they don't foul things up. We know Zajac and Whitney have been given deals in part because the parent organization thinks they may do something, but that's not saying too much either. We know that Pelley has played in a bottom six role before and could do a decent job of it, but that's all. Yes, the Devils may have to get past Rostislav Olesz, Krystofer Barch, Mattias Tedenby, and Stefan Matteau to get to those players. But the powers that may be may want to pick one of those five for a limited spot instead depending on how injuries happen. And it's possible the Devils have to go that deep among their forwards; ten out of the last fifteen seasons had at least 17 forwards play in New Jersey for ten or more games. Unless New Jersey really likes Wohlberg, Hoeffel, Sislo, or Boucher, count on seeing some of those five guys at some point and possibly for more than just a game depending on what happens. The Devils could have improved this margin with at least getting better AHL players but they didn't and so it won't be short of a wonderful coincidence or something. I know a different player isn't always a better player, but I find it hard to believe that the Devils could not have improved on Sestito or Janssen in the system with some other journeyman.

We shall see how many skaters the Devils will use next season, either by choice and by necessity. Does this make you feel more hopeful about the defensive prospect getting minutes in New Jersey? Does this make you feel at least a bit more sour about Sestito, Janssen, etc. still being the system? How many skaters suit up for the Devils next season? Please leave your answers and other thoughts about the Devils' depth, or lack thereof at forward, in the comments. Thank you for reading.