The New Jersey Devils took a relatively significant number of minor penalties last season. In this post, learn how often they got caught tripping, how many calls each player took, and what Ryane Clowe & Michael Ryder may add in PIM from their 2013 season.

Share All sharing options for: Tripping & the Many Other Minor Penalties the 2013 New Jersey Devils Committed

Penalties are almost a given in any hockey game. It's rare for a NHL team to get through all three periods in regulation and not take a foul. More accurately, it's rare for a player to not get caught. Referees know the rules but they aren't always consistent in their enforcement. Sometimes they just don't even see what's going on. Eventually they find something done. Then, they make a player pay the price by sending them to the penalty box and the penalized team is shorthanded for a short period of time. The New Jersey Devils were actually a fairly disciplined team in terms of penalty minutes per game (10.8), but they finished with the ninth most minor penalties in the league (188) in 2013. The latter isn't very good since minor penalties usually lead to power plays.

Given that the Devils' penalty kill success rate was around the league median last season, it wasn't always a bad time when they took a call. While they can never be perfect, it's worth determining what the Devils have done to take these kinds of calls. If they can commit a few less of particular kinds of penalties, then the team could be a bit better off for it. A player on the ice is going to be able to help their team more than if they're in the box. While the entire 2013 Devils roster will not be back next season, I looked at what they got caught doing according to their individual player profiles at NHL.com and tallied it all up. Note: Yes, the charts look odd with the penalties set vertically, but it's the only way I can fit the chart on here without resorting to annoying and confusing abbreviations.

As a team, the Devils skaters took 18 different types of penalties for a total of 186 minor penalties. For what it's worth, Johan Hedberg was the only Devils goalie who got penalized and it happened to him twice. He got one interference call and one delay of game call. Even if you add those in to get 188, the Devils were caught tripping more than any other kind of foul. Out of the 29 Devils skaters who took at least one penalty last season (there were 33 skaters overall), 20 of them took at least one tripping penalty. Why would a player take a tripping call? They either were beaten and in trying to defend from behind they took them down, they were trying to after a puck but ended up literally undercutting an opponent, or it was an accident all together. Whatever the reason, tripping stood out.

Following tripping in the top five are three restraining fouls: interference, hooking, and holding. Nearly half the team got caught doing that as well. I call them restraining fouls in that a player commits them to try and prevent the opponent from doing something. Roughing is mixed in that group which can be anything from a player being excessively physical to a call given for something close to fighting but that isn't an actual fight. Outside of that top five types of calls, it tapers off after cross-checking to a number of occasional occurrences and one-offs. Who committed what is of particular interest, if only for the purposes of knowledge and trivia. 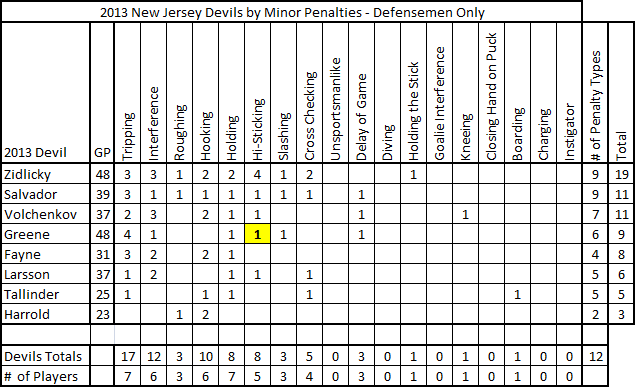 All eight defensemen who appeared regularly for the Devils last season took at least three minor penalties last season. Marek Zidlicky, who's currently unsigned, led the group in penalties. Believe it or not, he did not get a delay of game call for clearing a puck over the glass. Instead, he took multiple (and team leading) hi-sticking calls along with tripping and interference penalties. He also matched the team captain for the number of type of minor penalties. Should the Devils re-sign Zidlicky, the coaches would be wise to try to have him get penalized less. Keeping his stick down would be a good start.

The team captain, Bryce Salvador, managed to stay fairly cool under the proverbial collar in 2013. The only call he took multiple times was tripping. He just took only one of a whole bunch of others. Andy Greene followed the same path of minors except he took four trips and three fewer types of penalties. He did manage to take the only double-minor for hi-sticking, which the NHL site listed as only one penalty. I highlighted it in yellow for it to stand out. Speaking of stand outs, Anton Volchenkov took the team's only kneeing call among his other calls and Henrik Tallinder got the only boarding call given to New Jersey last season.

For the most part, the defensemen weren't too bad at taking calls. Like the team, tripping was nearly committed accross this board as was holding. However, I see room for improvement. Zidlicky could stand to take fewer fouls should he return. Salvador and Volchenkov are also defenders to keep an eye on in terms of discipline since they're physical players, they're slow so they may need to resort to restraining fouls, and they're penalty killers so it can hurt if they get caught. 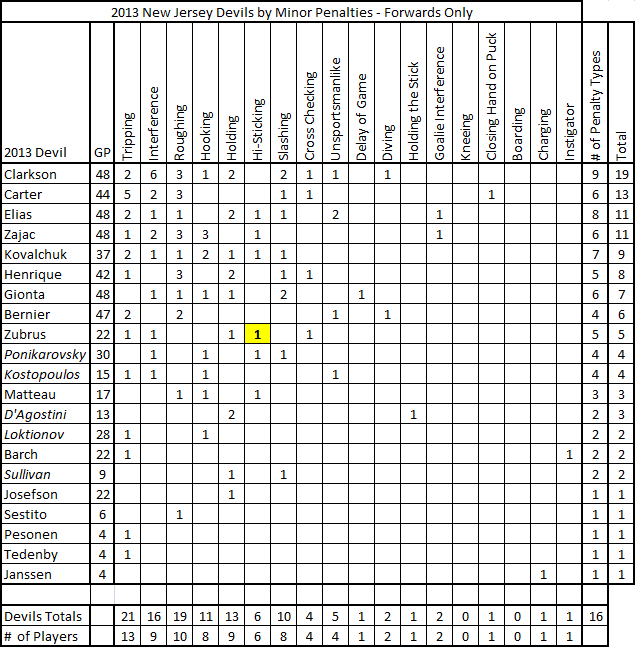 For the forwards, I did go through the guys the Devils acquired during the season and removed the penalties they took with their other teams. Those players are in italics on the left, by the way. The most common minor penalty they took was tripping with 21 total calls among 13 different players. Ryan Carter led the entire team with five of them last season, with Steve Bernier, Ilya Kovalchuk, Patrik Elias, and David Clarkson all tied with two each.

Roughing finished second, which perhaps shouldn't be such a surprise since they can be given for just post-whistle shenanigans in addition to just excessively physical play. What is a surprise is that Travis Zajac and Adam Henrique each took three of them. It's not that they're weak but those two don't immediately come to mind when it comes to physical play. Interference finished third in total calls among Devils forwards thanks to the best efforts of Clarkson, who got tagged six times for it. Like the defensemen, the forwards collectively took their fair share of holding (13), hooking (11), and slashing (10). Beyond that, the amount of other calls fade away.

There were a few notable points within this chart. Dainius Zubrus took the team's only other double-minor for hi-sticking last season. Like Greene, it was also only listed once per the league's site. Anyway, there were two diving calls given out, one each to Clarkson and Bernier. For the amount of "drawing calls" Clarkson did, getting only hit once for that isn't too shabby. I learned the league counted goalie interference separately and only two were given to New Jersey. Only two delay of game calls were issued: one to Stephen Gionta for a clearance over the glass, the other given to Ryan Carter for closing his hand on a puck. Matt D`Agostini was the sole forward caught holding someone else's stick. Cam Janssen brought nothing positive to the team last season but did manage to take the team's only charging call in 2013. Krystofer Barch tied Clarkson in fighting majors and got the sole instigator penalty last season. Lastly, Patrik Elias (!) took two unsportsmanlike penalties, leading the team's five total.

Anyway, Clarkson led the forwards in terms of number of types of minor penalties and minor penalties by the forwards last season. Carter finished behind him and could at least stand to try and not trip so many times. Elias and Zajac also took their fair share but they also play a lot more than Carter so they could be more likely to take calls. Still, the fact that Clarkson's now signed elsewhere should help out the team should they want cut down on minor penalties.

Unfortunately, Ryane Clowe may actually replace Clarkson when it comes to going to the penalty box. He didn't take as many total minor penalties, but he actually took more types. Clowe only got hit for interference once, but he got caught tripping three times so he'll fit right in with the restof the team here. His other calls raise a bit of an eyebrow, namely the two unsportsmanlike calls and his instigator. Like Clarkson, Clowe has been known to throw down and he did that last season. When that happens, you sometimes get those calls - it's not common, but it can happen. Given that he's got a fairly recent history of concussions, that really should be curtailed. However, old habits die hard.

Michael Ryder took seven calls, only one of seven different types. Nothing really jumps out except for that he got sent to sit for boarding once. Given that only one Devil last season was assessed a boarding penalty, it's an odd coincidence that the two new Devils signings each had one of those calls last season. All it is coincidence though. In any case, with these two coming in, it's entirely possible the Devils will take about the same rate of minor penalties in 2013-14 (an 82 game season) as they did last season (a 48 game season). I can easily see and prepare to get frustrated should Clowe literally replace Clarkson's role in going to the box. Ryder will add in a number of penalties, Zidlicky returning means he'll take a whole bunch should he get as much ice time again, and the return of the usual bunch should bring about the same. While it wasn't really that bad over all of 2013, here's hoping the penalty kill gets at least a bit better in the coming season.

I understand most of this may be trivial but it can highlight areas where the team can improve, even if it's only a little bit. Penalties are going to happen and in rare cases, they may even be preferable to not fouling an opponent. But generally, I feel that cutting down on the restraining type of minor penalties would be desirable. If a Devil, defenseman or forward, is in a better position to make a play or even dials back what they do with their stick (e.g. don't hit the hands), there could be fewer minor penalties issued and more time spent at even strength - something the Devils should want to be playing in based on what they did last season. All the same, let me know what you've learned about last season's team taking penalties and what the team should do in 2013-14 to account for it or improve in that regard in the comments. Thank you for reading.