The 2013 UFA Goaltenders: The New Jersey Devils Can Help Themselves - If They Want To

The New Jersey Devils struggled to score but they weren't all that great at stopping pucks either. A look at the 2013 class of impending UFA goaltenders shows that the Devils could improve in net - provided they want to buy out one of their two signed goalies.

Share All sharing options for: The 2013 UFA Goaltenders: The New Jersey Devils Can Help Themselves - If They Want To

In 2013, the New Jersey Devils were fantastic in possession but incredibly unfortunate in turning their advantage in shooting attempts into goals. Plus, the advantage in possession came from being incredibly stingy on defense, the Devils weren't all that prolific in generating shots until April or so. They weren't all that great in stopping the shots they conceded, either. According to Behind the Net, the Devils finished with the league's fifth-worst save percentage in 5-on-5 play at 90.5%. Finishing in the bottom end in save percentage by itself isn't a killer - look at the 2011-12 Devils, or the 2013 Isles - but it certainly doesn't help. Especially, if the team can't score. While we may hope the Devils won't likely repeat shooting at 6.7% in 5-on-5 play next season, the Devils would be better off with some more stops.

This could be a problem as Martin Brodeur and Johan Hedberg are at least 40 years old each. They're not likely going to get better. If anything, one may want to hedge on them getting worse. Brodeur was actually decent in even strength in 2013. It was the penalty kill that dropped anvils on his overall save percentage. The Moose was a nightmare after his first few games and his numbers reflect that, even if he didn't give up nearly as many soft goals as one may think. Both Brodeur and Hedberg are under contract for the 2013-14 season so the Devils do not need a goaltender from a personnel standpoint. However, given the relatively low team save percentage, it may be in their best interest to improve on either one of them. In light of my recent speculation post and after reading some of the comments that it spured, it dawned on me that the Devils could do just that with Johan Hedberg.

Of course, it would have to be Hedberg to be replaced. Brodeur carries the higher cap hit between the two, he'll make $5 million next season, and the notion of the Devils unceremoniously dumping Brodeur is about as likely as a unicorn replacing me as the manager of ILWT. Hedberg will only make $1.4 million, which would yield a much smaller buyout cost. Based on CapGeek's buyout calculator, he'll only cost $466,667 on the cap for 2013-14 and 2014-15 which is a definitely affordable hit. It's even cheaper than the Trent Hunter buyout cost they're currently eating. The Devils could use that savings plus their massive amount of cap space to get a younger and better #2 goalie. Given that Brodeur has sustained an injury that has kept him out for significant parts of the season, the Devils should ideally get someone who has and can be decent for 20-25 games.

Fortunately, there are several backup options among this year's class of unrestricted free agent goalies. It's been that way in 2011 and 2012, so it's nothing new. Nevertheless, let's look at them. CapGeek had 25 netminders listed as impending UFAs. I took that and their stats (up to the Sv%) and organized them by their even strength save percentage in 2013, as found at NHL.com. I also included their penalty killing save percentage in 2013, their career games played, and career save percentage to provide some perspective on their experience, or in the case of more than half of this list, their lack thereof. Here's the chart and please keep in mind that Hedberg's even strength save percentage was 90.1% last season. 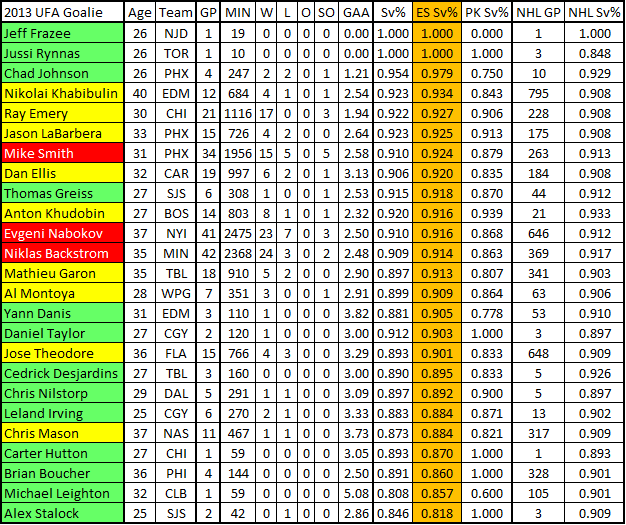 The goalies highlighted in green were those who got very little time in the NHL. Almost all of them are goalies who were third or fourth on their team's depth chart and have yet to break through. Almost all of them are goalies the Devils shouldn't go after unless they might want bolster Albany. Even then, I don't know if it would be worth it. They're all examples of how difficult it can be for a goalie to break into the league given that there are only so many spots and when the opportunity does come, the margin for error is slim. Goalies who stink don't stick around for a long.

The only goalies in that group who have experience are Brian Boucher, Michael Leighton, Yann Danis, and Thomas Greiss. I think it's fair to say that the Devils should avoid Boucher and Leighton like the plague. A second go-around for Danis may not work since it's unclear. Greiss is intriguing since he's only 27 and has been stuck behind heavy-load goalies in Evgeni Nabokov and Antti Niemi. That said, he also didn't make much of a case compared to other #2 guys. In short, I'd pass on that group. In fact, let's shorten this chart to the backups, those in yellow, and starters, those in red.

There we are. Nine backups and three starters. We can actually pare this down further. There's no way the Devils should even consider Nikolai Khabibulin. Yes, he had the highest even strength save percentage among the group. However, the Devils shouldn't try to get older and a quick peek at what he's done prior to 2013 should be enough to turn off any interest in him. Similarly, talk to your local Oilers fan. The Devils should also stay away from Jose Theodore and Chris Mason as they had numbers comparable to Hedberg. It's not a guarantee they'll be as bad next season - their respective PK betrayed them too - but this suggests they wouldn't be upgrades.

So if we ignore them, then we're down to six backups and three starters. I was surprised to see Evgeni Nabokov do as well as he did at evens and finish ahead of Niklas Backstrom. However, I doubt they would want to take a #2 or #1A spot when they could be starters elsewhere. Mike Smith will command plenty of interest as he's only 31 and he's had two good seasons as a starting goalie in Phoenix. They were also his only seasons as a bona fide starter; evidence that it can take a while before a goalie gets a shot at the top job. The concern will be whether he can continue to be good since his time in Tampa Bay before signing with Phoenix suggests otherwise. As tempting it may be to think about signing Smith to New Jersey, have him split time, and then be the "bridge" guy in 2014-15, it may be more costly than it's worth. Especially if there is a certain Swedish goalie available in two seasons.

The six aren't a bad bunch to pick from. Ray Emery represents the best of the bunch and he did play quite a bit alongside Corey Crawford in Chicago. I have no doubt he can play 20-30 games in a full season. The former Senator starter has been a #1A/2 guy for a few seasons and he's fairly young (for a UFA) at age 30. CapGeek listed his 2013 cap number as $1.15 million in 2013. The Devils may be able to give him what they would give Hedberg and improve their position in net for the additional cost of Hedberg's buyout. Now that I've written that, I would enjoy seeing something like that. Failing that, the Devils could do the same with Dan Ellis. Make fun of his problems with money (Aside: More money does mean more problems) all you want, but he filled in admirably for Cam Ward when he got hurt - at least at even strength - and he's been a serviceable backup for a few seasons now.

The Devils could go in a more youthful direction, even though Emery and Ellis are relatively young on this list. Anton Khudobin got his first real chance as a backup in this shortened season behind Tuukka Rask and did quite well. He's only 27 and if the Devils feel there's real talent there, they could roll the dice on him. I do mean that since he did only play in 14 games this season and only 7 games in the years prior to 2013. It's not really clear what kind of goalie he could become. Boston's going to be right up against the cap since they have to sign Rask among other tasks, so Khudobin could very well be available on July 5. If keeping Hedberg is choosing the Devil you know, then buying out Hedberg to snag Khudobin would be the closest to choosing the Devil they don't. It's risky, but if Khudobin proves to be a solid guy, it could benefit the Devils in future seasons. The Devils could theoretically do that with Al Montoya, but he wasn't nearly as impressive in Winnipeg so I would stray away from him.

Barring that, the Devils could make a play for career backups Jason LaBarbera or Mathieu Garon. While one may be sketchy of signing any goalie coming out of Tampa Bay, Garon wasn't all that bad at evens. If he can repeat that again, then he could prove useful. LaBarbera has made a career out of being a fill-in guy. His overall save percentage got boosted by a strong PK, but the even strength save percentage belies he could be quite decent. And decent would be an improvement over what Hedberg brought in 2013.

While I think there are five UFA goalies that are viable options as a replacement for Hedberg, I do have to take a step back into reality. This has been an exercise in speculation. again, the Devils have Brodeur and Moose signed for another season and it's entirely possible the team will keep them as the goalies. And maybe it won't be so bad. It's not out of the realm of possibility that the penalty kill is a bit stronger - or at least leave fewer opposing forwards wide open in the slot - and both goalies could see their numbers benefit in that way. It's not impossible to think that Brodeur could hang around league average at evens and Hedberg can be a bit better. We may expect Hedberg to give up a soft one about 30% of the time and maybe similar for Brodeur (we shall see with this year), but the team may be able to deal with it. The cheapest play with respect to the New Jersey Devils goaltenders is to do nothing and hope the rest of the team improves to make up for it. I may think the smart move is to buy out Hedberg and get one of these UFA backups for 2013-14 to improve in net while working to improve outside of it. This year's class makes that possible, but we shall see what is to come.

What do you make of this year's group of UFA goalies? Do you think the Devils should buy out Hedberg and get one of these goalies to replace him as the Devils' #1A/#2 goaltender? If so, who do you want? If not, why not? Please leave your answers and other thoughts about the UFA goalies and the Devils' own goaltending in the comments. Thank you for reading.