Last week, I asked all of you readers to give me your top ten prospects for the 2013 NHL Draft once again. These are the results of all of your top tens, which reveals some kind of consensus as far as who will go where in the top ten.

Share All sharing options for: The Updated ILWT Readership Top 10 Prospects for the 2013 NHL Draft

Last week, I asked you all once again to give me your top ten prospects for the 2013 NHL Draft. I wanted to see how much opinions have changed since the beginning of the New Jersey Devils' offseason. I wanted to see if the consensus would change and by how much. I got some more interest than last time between comments here and replies to @InLouWeTrust on Twitter. Out of the 19 total lists, here's the final tally from you, the community at-large. 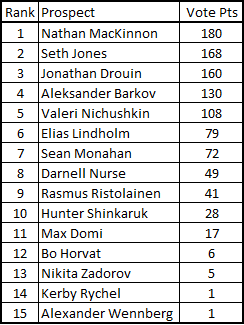 It appears that there have been some changes. You all have gone along with Joe Sakic and decided that Nathan MacKinnon is the top man in this year's draft. Seth Jones gets bumped down to #2. It wasn't unanimous, but that switch was made. The top four remains the same: MacKinnon, Jones, Jonathan Drouin, and Aleksander Barkov. Following up the "Big Four" is the Big Russian Valeri Nichushkin, who had one of the largest ranges of votes. Elias Lindholm finished behind him, followed by Sean Monahan. Those six were on everyone's lists except for one that omitted Lindholm. Here's a breakdown of how many lists had these players throughout the top ten: (Note: # Vs = number of votes, as in how many lists did they appear on.) 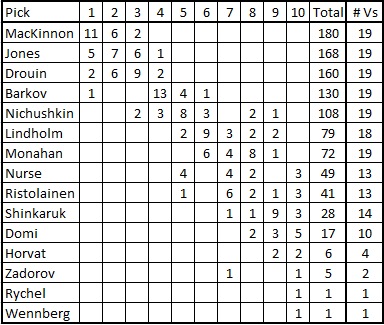 MacKinnon led in first place votes, though Jones still had some backers like me. Drouin and Barkov got a few up top as well. Barkov impressively led with the most lists in one spot: fourth overall, which is about where he's slated to be taken. Interestingly, the most commonly voted spot for the top tier turned out to be their final spot in the total tally. Lindholm got picked sixth more often than not and he ended up there (though a few of you hope he'll fall to #9, and, quite frankly, I hope you're right). Same for Nichushkin, though one provider hoped he'd fall to #9. This streak ended with Sean Monahan, who got more votes at #8 but the strength of those who put him at #6 and #7 moved him up a spot. It still appears to be a safe bet based on our readership that he's going somewhere between 6-8.

Beyond Monahan is where there's more in flux. Darnell Nurse got quite a bit of attention as high as #5 to being off the list entirely. Interestingly, nobody thought he would go at #6 or #9. The same applies for the third defensemen in the collective top ten, Risto Ristolainen. Because of how high some readers placed him, the math worked out such that he finished ninth in total voting. Our mock draft selection of Hunter Shinkaruk garnered the most votes at the #9 spot, so it appears a plurality of you agree. However, like the two defenders, he didn't make all lists so it's not at all a sure bet. Max Domi rounded out the top ten, with a few of you thinking he'll go to Buffalo, New Jersey, or Dallas. There was a little love for Bo Horvat and Nikita Zadorov sneaking into the bottom of the top ten, and one tenth-place shoutouts got me to type Kerby Rychel's and Alexander Wennberg's name in this post.

Still, it appears the overall consensus is that the top ten will consist of MacKinnon, Jones, Drouin, Barkov, Nichushkin, Lindholm, and Monahan with Nurse, Ristolainen, and Shinkaruk likely rounding it out - though Domi could press in. Of course, that's our opinions and surely various teams have it different on their own draft boards.

I'd like to thank all of the following people who submitted their top tens for this post. Here at ILWT, thank you to PA Devil, Devilsrule, JJ123, 9zparise, snwbdgislife, Bar Man, CJ Richey, Mike Stromberg, NJGuy, awesomodynamo, Michael Gianetti, and Chris Calabrese. On Twitter, please add an "@" to the following handles for: Phillip_Osophy, Easy_Chowder, walkingdevs, SpyroMantzas, Themazzo23, and cyknus. Thank you all for your participation and for not naming a goalie.

Thank you all for reading and we will see tomorrow whether there's some wisdom within this crowd.