As the 2013 NHL Entry Draft comes closer, more and more mock drafts are coming out. I review the 32 latest ones per DC Pro Sports Report's list and determine that there really isn't a consensus player for the Devils at #9, but the pick was usually a forward.

Share All sharing options for: Little Consensus Among Forwards for New Jersey Among NHL Mock Drafts

June 30 is coming ever so closer. The New Jersey Devils have given their draft tickets to season ticket holders through their online accounts. Lottery winners for tickets will be announced soon. Preparations are being made for the 2013 NHL Entry Draft as we speak. As the draft approaches, more and more fans want to know who the prospects are and who their favorite team will draft. Here at In Lou We Trust, we have a special page filled with all of the prospect profiles we have put together so far right here. Later this afternoon, we will reveal our selection for the ninth overall pick in the 2013 SBN NHL Mock Draft of the first round right here at ILWT.

In the meantime, I decided to get into the mocking spirit - and I don't mean trashing Josh Kosman's latest exclusive (the story from The Post, the first tweet and second tweet by Tom Gulitti to bring the truth to light) - and look at other mock drafts on the Internet. Fortunately, the DC Pro Sports Report maintains an updated list of as many mock drafts out there. They organize them by the date they were last updated, link to all of them, and immediately list the first five picks plus the Capitals' selection for each mock. Some are really old but you'll notice the increase in predicted draft picks from May onward. Since I'm a Devils fan, you're likely a Devils fan, and this is a Devils site, I decided to go through all of the mock drafts put up since May 1 to see if there's any kind of consensus. Keep in mind, some of the mocks are old and some will definitely be updated, like the three mocks at NHL.com for example. I'm sure other sites will have ones coming out soon too, so this is just a snapshot of what was at DC Pro Sports Report on the evening of June 18. In any case, it would be interesting to see if there is some kind of consensus among various people as far as who the Devils should take.

As the headline shows, there really isn't one other than that 75% of the 32 mocks have the Devils taking a forward. I think that makes sense. There's a lot of good forward prospects available and the Devils could really use one. Seven have the Devils taking a defenseman, which isn't all that good. Only one has them taking a goalie, which is a terrible decision with the #9 pick. Here's a list of all of them in descending order by date. Links to the mocks are available at the DC Pro Sports Report site. 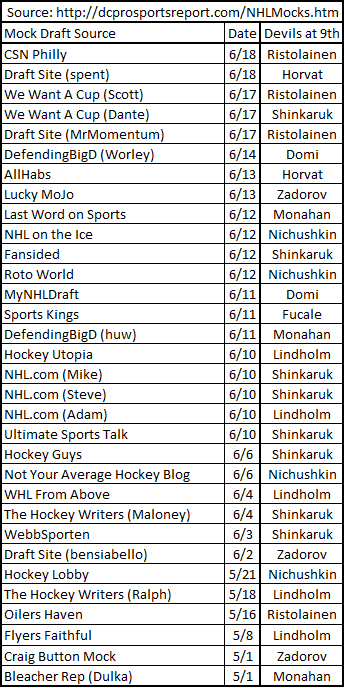 There's a lot of different names being thrown around for the Devils at ninth overall. Here's a summation of all 32 mocks by prospect: 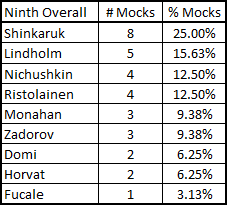 There is no consensus pick but Hunter Shinkaruk does emerge from this selection of mock drafts as the leader. It's a plurality and it's not by much, but it's something. Curiously, three people follow close behind: Elias Lindholm, Valeri Nichushkin, and Rasmus Ristolainen. I would be absolutely thrilled if Lindholm or Nichushkin fall to ninth overall. I really do think both are top six selections given that the former is one of the best Swedish prospects in a while and the latter reminds people of Evgeni Malkin. The Devils should be ecstatic, too - and possibly set aside a roster spot for them (namely Nichushkin given his NHL wishes). What I don't quite get are the mocks who think the Devils will take defenseman Rasmus Ristolainen. Sure, he could turn out to be a fine defender and if the Devils didn't have so many intriguing defensmen prospects, then it would be a good idea to take him. But the Devils really don't need him, so I don't fully get it.

The flotsam after those four is interesting. Sean Monahan is another forward that I think would make a fine Devil, but I doubt he falls to ninth overall. Max Domi and Bo Horvat could very well be available and it may not be too much of a stretch for the Devils to take them in their current spot. Defenseman Nikita Zadorov, based on this profile by Huw Wales at Defending Big D, projects to be a defensive defenseman. He could be good at it, but the Devils do not need such a prospect. Lastly, Zach Fucale is a goalie and drafting a goalie that isn't going to be someone special in the first round is a poor idea. While there was no clear consensus, it seems to me that we should keep a closer eye on these eight prospects (I'm not counting Fucale) at this year's draft as potential Devils picks.

As more mocks get added and updated, perhaps a stronger consensus may form. Then again, perhaps not given that the Devils' selection will be driven in part by those selected in front of them. Among all 32 mock drafts, only four prospects didn't get predicted beyond the first four picks: Seth Jones (still #1 in 27 out of 32 mocks), Nathan MacKinnon (#2 in 25 out of 32 mocks, #1 in 4 mocks), Jonathan Drouin, and Alexander Barkov. Yes, even Nichushkin has been floating as high as #4 to as low as #9 here. So there's plenty of chaos and it will continue until it all goes down on June 30 at the Prudential Center. Please come back later this afternoon for yet one more opinion about who the Devils should take at #9 in our SBN mock draft selection. Thank you for reading.