David Clarkson didn't just lead impending UFA forwards in shots per game in 2013. His advanced stats at 5-on-5 play show he was dominant in possession, which means it's in the best interest of the New Jersey Devils to re-sign him.

At the end of the 2013 regular season, I was pretty down on David Clarkson. I resigned to thinking that a team like Toronto would throw truckloads of money at him when he becomes an unrestricted free agent (UFA) on July 5 and I wouldn't be opposed to that. Now that the season has been done for over a month, a fresher look at what Clarkson has done leaves me with fewer complaints. My opinion started to shift after I read this very good post by Mike wrote that highlighted what kind of player Clarkson has become over the last two seasons. A few weeks ago, I organized the top 35 UFA forwards in scoring by how much they shot the puck last season. I discovered that Clarkson was far and away the most prolific, which means his departure would leave a big hole on a team that really needs more shooters. I originally thought the only must-re-sign UFA was Patrik Elias, but now I think Clarkson should be in that same category of importance. Especially after looking at his underlying numbers at even strength.

For today, I decided to take the same group of UFA forwards from the shots post and list some of their 5-on-5 stats from Behind the Net. This includes: TOI/60, which is their time on ice in 5-on-5 per 60 minutes; On-Ice Corsi rate, which counts all shooting attempts; Corsi Rel QoC, which is a measure of the relative Corsi of the player's opponents; OZS%, which is the percentage of offensive zone starts out of offensive and defensive zone starts; and PDO, which is the sum of the team's shooting and save percentage when the player is on the ice. I included team ranks for the On-Ice Corsi and Corsi Rel QoC values to show how they stacked up on their own team among forwards who played at least 20 games last season. The league rank is just for On-Ice Corsi and it's out of the 395 forwards who played at least 20 games last season. (Aside: Krystofer Barch ranked 184th with zero. Yes, that Krystofer Barch.) The other information - age, team, games played, age, and points - came from CapGeek. As you can see in this gigantic chart, Clarkson reigns in possession as well as in shots per game. 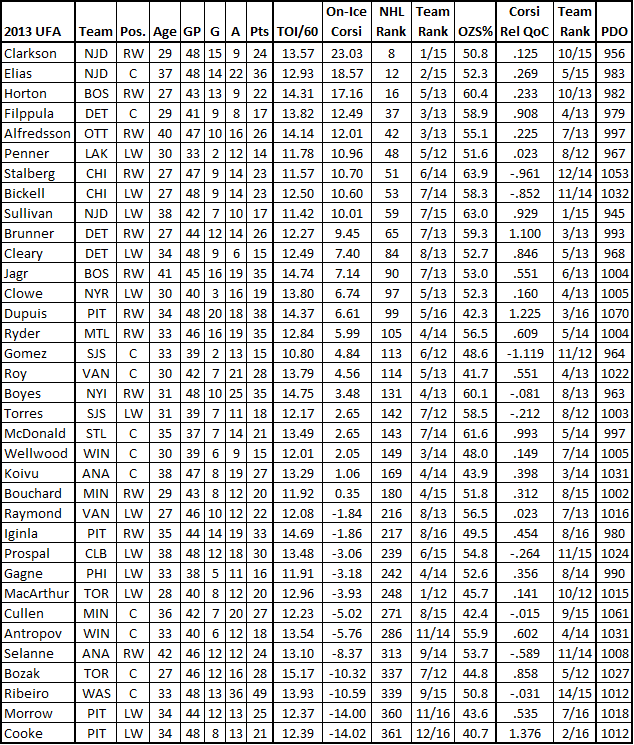 Let's focus on Clarkson first. He had the best possession rate on a very strong possession team. It's true that he didn't face the toughest competition. However, Elias was a bit higher in Corsi Rel QoC and managed to finish five spots ahead of him on the team. Peter DeBoer's usage was a bit odd at times so I'm not so concerned about that. In any case, he didn't get a lot of cushy zone starts and even with a relative-to-the-team weak Corsi Rel QoC, you have to be fantastic at driving the play to get the eighth highest rate among all forwards in the NHL who played at least 20 games.

It always helps playing alongside the possession-conductor Patrik Elias, but the WOWY at Hockey Analysis shows that Clarkson was quite good away from him. So it wasn't like 26 dragged 23 all season long. That said, I wonder if players can get hot in Corsi rates? Because as Mike pointed out, Clarkson was a positive player in 2011-12 but he was never like anything he was in 2013. I figure he'll still be a net positive in the possession department, probably not a top-ten player. That said, it's a great sign that he's more than just a guy who got a whole bunch of goals over the last two seasons. So is his rather low PDO from 2013 - like a lot of Devils - and he becomes a very attractive UFA target. Why wouldn't he be? He shoots a lot, he scored 15 goals in a shortened season in spite of a massive cold streak, and he was better in possession than all of the other top UFA forward scorers while not being totally sheltered. Yeah, this is a guy a lot of teams should want. At the same time, this is a guy that the Devils really must re-sign. The chart doesn't really provide any great answers as who can replace all of those contributions. Based on this Wednesday post from Tom Gulitti at Fire & Ice, Lou understands this and has begun talks; hopefully, Clarkson and his agent are receptive.

Now, let's look at the rest of the list. Even if the Devils do keep Clarkson and Elias, this massive chart is a good way to identify who the Devils should be interested and who they should avoid. Let's start with players who jump off well on this list. Anyone who thinks Nathan Horton would be someone to go after has reason to feel a bit more justified. Horton was the best non-Devil in possession among the UFA forwards and ranked pretty well on a Boston team that was brilliant in that category. It could be the result of the system, and Horton was sheltered with a very generous OZS%. That said, he's a name to keep in mind. Likewise, Damien Brunner remains an intriguing option. He just played his first NHL season with Detroit but he had a good shooting rate and came out very well against tough competition. Again, he had a high OZS% so his adjusted rate would be much lower - still a positive player. It's an open question as far as what he can do going forward but he's someone to ponder about. Valteri Filppula is similar and better in possession, but Brunner plays the more desired position of a winger whereas Filppula is a center. Moving on, while he may be more suited for a bottom six role, Dustin Penner came across very well in possession. Should the Devils want some bigger body presence and enjoys a good stack of pancakes, he's another guy to consider.

While they weren't as fantastic in possession, one shouldn't shrug off Michael Ryder. He was positive in possession even with a high OZS%, he faced a good level of competition on his team, and his PDO wasn't out of whack. He did shoot at a much higher percentage last year than his career so he may not be as productive, but the underlying numbers suggest he can still be of use. Similarly, the Devils could consider a flyer on Ryan Clowe. Surely he can score more than 3 in a full season. Alternatively, if the Devils want to go after a tough-minutes guy, then Pascal Dupuis and Derek Roy should be the targets given that they often started their shifts in their own end, played against a strong level of competition, and came out well ahead of even in on-ice Corsi rate. They're not perfect since one has to wonder whether Dupuis can do it away from Pittsburgh's aces (and that high PDO is a red flag) and Roy's a center, but they're options nonetheless.

On the opposite spectrum, this shows there are some players the Devils and other teams should probably stay away from, or at least stay away from giving them big money. Mike Ribeiro may have led the UFA forwards in scoring but his underlying numbers strongly suggest that's not going to happen again. There should be some kind of warning whenever someone suggests signing him. Tyler Bozak got tough minutes on a terrible possession team - and didn't really change the course. Brendan Morrow's numbers made me say Brendan No-rrow. While they were both great in terms of on-ice Corsi rate, Viktor Stalberg and Bryan Bickell were very sheltered in Chicago. They each had high OZS%, they played against some of the weakest opponents had to offer the Hawks, they had high PDO values, and they weren't even all that productive in doing so. I would be cautious with going after either of them (and between the two, Stalberg is preferable).

I would like to focus on Clarke MacArthur. I once thought he was like Clarkson. Between this chart and the shots per game chart from a few weeks ago, that's not the case. Clarkson shoots a lot, MacArthur does not. Clarkson drove the play forward last season; MacArthur did not. That he led the Maple Leaf forwards in on-ice Corsi is an indictment of the team, not a compliment for the winger. Adjusting for zone start would get him close to even, but nowhere near 2013 Clarkson and maybe not at the level of 2011-12 Clarkson. Clarkson did not have good fortune in terms of PDO, MacArthur finished over 1000, indicating good fortune. MacArthur and Clarkson may have been similar in the past; but that's not the case right now. MacArthur may be useful and I wouldn't be so opposed to signing him in addition to keeping Clarkson. But he is not a Clarkson replacement.

Lastly, while neither of them will sign with anyone but their current teams, it's obvious that Daniel Alfredsson remains great whereas Teemu Selanne was not by these advanced stats. Ottawa, pay your captain. Anaheim, well, it is what it is.

Now, I recognize that these advanced stats, like shots and points and other values, are just part of the picture for these players. They are only for 5-on-5 situations and there could be reasonable explanations for how a player performed well or poorly. Maybe some of the players with higher rates had great years like Clarkson and aren't likely to repeat them unless something happens (e.g. stays within system). Maybe some of the players with terrible rates would see improvement on better teams or with a better coach (e.g. Bozak, I think). It's always a good idea to look at what these impending UFA forwards did in the past to get a better idea of what he could bring to the proverbial table. Still, it's in the Devils' best interest to get players that are positive in possession in addition to players who average over two shots a game, are generally healthy, have been productive, and whatever else they desire. It's like a puzzle. In addition to identifying what pieces are missing, there needs to be an understanding of what kinds of pieces are available. And they can adjust accordingly. For example, they can get away with soft minute dynamos provided someone else can soak up tougher situations. That's the overall idea of looking at stats like this.

The advanced stats at Behind the Net lead me to conclude that the Devils absolutely should retain Clarkson's services. It also suggests that there can be some helpful players available even if they aren't ideal in one way or another. I want to know what you take away from all this. Do you agree that the Devils need to keep David Clarkson? If so, how much will it take? Who else from this list of 35 UFA forwards other than Elias (I'm assuming he's a must-sign) do you want to see the Devils go after and why? Please leave your answers and other thoughts about the UFA forwards and their advanced stats in the comments. Thank you for reading.