How Much Should the New Jersey Devils Pay to Keep Patrik Elias?

It's a given that the New Jersey Devils should retain the services of impending unrestricted free agent and legendary Devil Patrik Elias. But how much should he get? To figure out what could be a reasonable offer, I compare his stats against other over-36 NHL forwards.

Share All sharing options for: How Much Should the New Jersey Devils Pay to Keep Patrik Elias?

My fellow New Jersey Devils fans, ask not whether the team should retain Patrik Elias but ask how much they should offer to retain him? Truth be told, I think you already have been asking that same question. While much has and will be written about David Clarkson and what kind of free agent forwards the team should go for, there's not much in the way of discussion about Patrik Elias.

To me, it's sort of assumed that the Devils would want to bring him back. How can they not? He was the team's most valuable player in 2013. He was arguably their most valuable player in the 2011-12 season. He's been an absolute force for the Devils throughout his career. Just to name a few aspects: he's able to produce significant amounts of offense, drive the play forward, make his linemates better, be effective at center (except at faceoffs) or wing, play against tough competition, kill penalties, and generally be a key component in what makes this team successful or at least very difficult to play against. Elias may be on the wrong side of 35, but the past two seasons has shown that age has been just a number so far. And the Devils need him to return and keep going. The problem with special players and active legends is that replacing more or all of what they bring to the proverbial table is very difficult. I'd say it's near-impossible given the class of unrestricted free agent forwards and the team's organizational depth. There is only one Elias.

Elias is the one in control now. As an impending unrestricted free agent, Elias can do as he wish. If he wants to talk now, he can. If he wants to wait, he can. I In fact, given that he's now 37 and has really had a full career, maybe he's considering about ending on a high note. I, of course, wish he wants to keep playing and to keep playing for the Devils. Ottawa has their Alfredsson, Anaheim has their Selanne, a bunch of teams had Jagr and The Wizard, so why not Elias for New Jersey? Of course, most of those guys didn't sign for cheap even as they got older. That's why it's important consider how much he should be offered. That's going to really drive whether he returns to New Jersey and continue to be the best #26 in the organization. How much should one pay such a player like Elias?

Well, given his advanced age, I went to Hockey-Future to see how many forwards over the age of 36 (as of February 15) played in the league. Only 26 forwards made the cut, only 13 scored ten or more points, and look who's second among them all. It's the subject, Patrik Elias. He's one of the four 36+ year old forwards who put up over 30 points last season, finishing just ahead of 40-year old Jaromir Jagr. Elias did not come close to the leader, Martin St. Louis but very few players regardless of age came close to him in scoring. I decided to highlight the thirteen with double-digits in points as they include two other players who've spent a long time in their organizations: Ryan Smyth and Milan Hejduk. I don't think it makes sense to compare Elias to guys who didn't play much, didn't produce, or both (Sorry, Mr. Boulton). 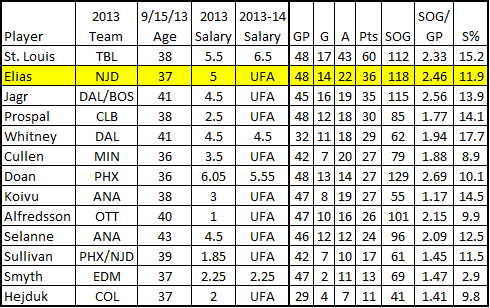 I went to CapGeek and included their salary from this past season (in millions), their next season salary (in millions) or contract status, and their age as of September 15, 2013 along side the numbers from Hockey-Reference. Elias stood out in terms of production, with a near 2.5 shots per game average to go with his 36 points. He also stands out in the financial department. Only Shane Doan and Martin St. Louis got paid more than Elias in 2013. While Elias' cap hit stands at $6 million, the salary has tapered down to $5 million in recent seasons. Interestingly, the majority of this group could hit the market this summer. Only St. Louis, Ray Whitney, Doan, and Smyth have deals going into 2013-14. St. Louis stands to get a raise - and deserves it since he led the league in scoring in 2013 - but the rest stand pat or get bit of a reduction.

It's tempting to look at all of the sub-five million dollar salaries for Jagr, Selanne, Alfredsson (his $1 million is the end of a big reduction) and conclude that he should take something comparable. Well, Elias' out-scoring those players hurts that argument a bit. So does a quick look at some advanced stats from Behind the Net. (Notes: All stats are in 5-on-5 play; the league and team ranks are based out of forwards who played at least 20 games. League ranks are out of 395 forwards.) 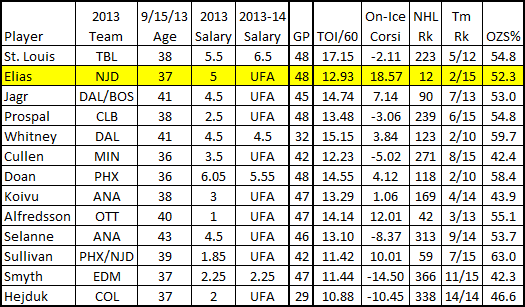 The majority of this group of 13 are offensive players; Matt Cullen and to a lesser extent Saku Koivu may be the exceptions as they were primarily used his in own end of the rink. Well, so were Smyth and Hejduk but they were bad possession players on bad possession teams. In any case, there were a handful of guys who drove the play rather well in terms of on-ice Corsi. Daniel Alfredsson maybe wasn't so productive in terms of points but a lot of good things happened when he was on the ice. Steve Sullivan did quite well though his high offensive zone start percentage (OZS%) helped him a lot. Doan and Whitney were standouts on their own team. Jagr did well, though going to Boston made him look worse in the team rankings as that team has been a possession powerhouse.

But at the top of the possession mountain in this group was Patrik Elias. He was twelfth among all forwards who played at least 20 games this past season in on-ice Corsi. He continued to prove the the axiom "people play well with Patrik" all season long in New Jersey. He did get a bump with a positive offensive zone start percentage and he did play less ice time than some of his fellow over-36-year-olds in the group. Even taking both into account, he's still head and shoulders above the rest in this group. Still, he really was the straw that stirred the drink. The only Devil forward to surpass him was his regular linemate and pending UFA David Clarkson. We know that Elias was dominant in terms of possession. Now we know he's far and away the best possession player among his age-group, which includes some significantly good players in this regard.

Above all, that's a key point to take away. What makes fans appreciate someone like Alfredsson or Selanne or Jagr isn't that they're still playing at this advanced age, but that they're also significant contributors to their team. They are players. I'm sure someone may look at this and think they can help the Devils next season. I'm almost tempted to argue for Jagr except I'm not sure I want the team to roll the dice on a 41-year old guy who sometimes demonstrates that he hasn't grasped the concept of defense. That's really the main risk in re-signing Elias. How much longer can he perform at this level? We know that a player's effectiveness does eventually fall victim to time. Time is undefeated in that battle. I'd like to think he's got plenty left in the tank but I base that on optimism and not seeing him really fade as a player 2013 went on. I don't have any evidence. The question will loom until he calls it a career.

With respect to what to offer him, it does mean it should be a short term. Fortunately, comparing Elias to others at his age or older gives one an idea of a reasonable range. I don't think that $4 or $4.5 million is insulting, but given that Elias out-scored, out-produced, and out-drove the majority of his peer group, I think it would be more fair to offer him his current salary. $5 million for a season remains a significant sum of money in this league. It would make him either the second or third highest paid forward on the team, which would befit his top-six role he'll surely have in 2013-14. Therefore, I would like to see him stay for two seasons at a total $10 million. I think that's what the Devils should offer him, or at least offer something in that range. This way the Devils can pay him significantly based on the past few seasons and give him a little security while not being tied to too long of a deal in case Elias' performance goes south. If the team and Elias think he can really go until 40, then I could see three years being offered but I would prefer two as a maximum. 40 may be pushing it if only because so few players even play at that age (of course, Elias is a special player, so who knows). Again, I'm open to some variations, but that's what I think based on what I've discovered (e.g. $10 million as in $5.5 million first, $4.5 in the second; less money overall but still paying $5 million in first year; a one-year deal for $5 million only, etc.). I think anything significantly over that (e.g. $13 million over two years) may be overkill, but I wouldn't make it a deal breaker since the cost of overpaying Elias may be less than the cost of trying to replace what he has done for the team year-in and year-out.

Let me turn to the question to you. Assuming you want him to come back to New Jersey, how much do you think the Devils should offer to keep a 37-year old ace forward like Patrik Elias? I've asked the question on Twitter; but please feel free to leave your answer and any explanation as to why in the comments. Thank you for reading.