A Closer Look at Martin Brodeur's 2013 Save Percentage Splits

Martin Brodeur has an overall save percentage at 90% and with the New Jersey Devils now out of the playoffs, the goaltending may be a reason why they didn't get there. In looking at Brodeur's save percentage splits by situation, it's not as simple as it may look.

Share All sharing options for: A Closer Look at Martin Brodeur's 2013 Save Percentage Splits

After the 4-1 loss to Our Hated Rivals, Martin Brodeur saw another hit to his already low save percentage for the 2013 season. Brodeur's total save percentage currently sits at 90%. Prior to games being completed on Sunday night, Brodeur sits in between the likes of mere goaltenders like Justin Peters and Jonathan Quick in this statistic among league goalies. Out of 81 goaltenders who have appeared in any one game, Brodeur is not far from 60th in the NHL in save percentage. When you consider Johan Hedberg has been even worse at 89.1% as of this writing, it's hard not to conclude that Brodeur's injury certainly didn't help. Moreover, it's not unreasonable that goaltending performance has been a reason why the Devils didn't make the playoffs. It's hard to make the postseason if both goalies are nowhere near the overall league average save percentage of 91.2%.

However, it's not as simple as that. Well, it's not all that simple in the case of Martin Brodeur at least. A closer look at his save percentage by situation reveals where the problem may truly lie. Believe it or not, Brodeur has actually been quite OK this season - at even strength.

Even strength is usually a good way to gauge how well a goaltender is playing. There's no special situation to deal with and a vast majority of saves attempted and made will come at evens since it is the most common situation hockey. According to NHL.com Brodeur has a save percentage of 91.8% of even strength. That's a considerable improvement over his last two seasons, which were about 91.2% and 91.1%. For full perspective with respect to Brodeur, here's a graph of his even strength save percentage as far back as NHL.com will let me: the 1997-98 season. 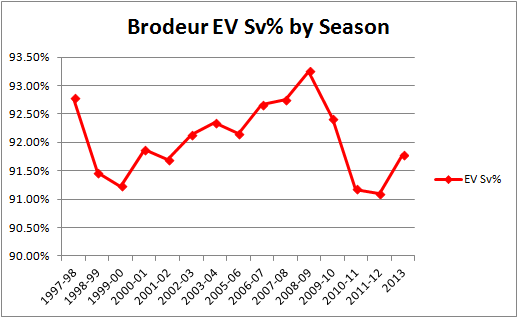 It appears he's bounced back in 2013 after a significant drop in the past two seasons. Also, note that he peaked in 2008-09. You know what happened in that season but hold onto that thought for a little later in this post.

Prior to Sunday night's games, the league average among all 81 goaltenders for even strength save percentage was 91.5%. So even after giving up three at evens to the Rangers, Brodeur remains above league average in the most common situation in hockey. In my view, that suggests that Brodeur really hasn't been so bad this season. (Hedberg, well, he's at 90.3%. Sorry, Moose.) So why is his overall save percentage so low?

That's easy enough. It's the penalty kill. Brodeur's penalty killing save percentage is a woeful 81.6%. That really sticks out even though goaltenders will face only a fraction of shots while down one or two men compared to what they'll see at evens. Power plays usually try to set up dangerous shots, making them more difficult to stop. Therefore, penalty killing save percentages tend vary from season to season. Even with that in mind, 2013 really is over the edge compared to the rest of Brodeur's career. 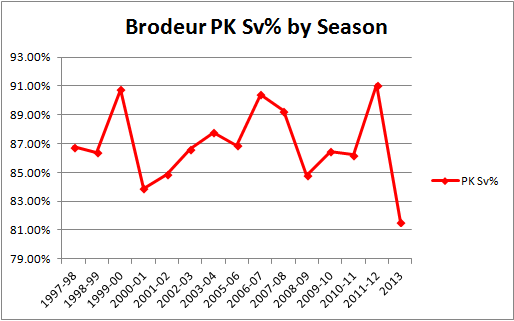 It's definitely ugly compared to past seasons. With respect to the league, it's, well, still ugly. The league average among all 81 goalies this season prior to Sunday night's games is 86.5%. Even Hedberg has been slightly better at an even 82%. So it's clear where the problem with Brodeur's goaltending lies. It's been on the penalty kill. Technically, it's special teams, but I'm not concerned about the power play. Brodeur's save percentage while up a man or two is only 89.5%, but that's 17 saves out of 19 shots and both goals against came in one game. That wouldn't drive the overall save percentage into a ditch but it doesn't help. To highlight that, here's Brodeur's cumulative save percentage so far this season. 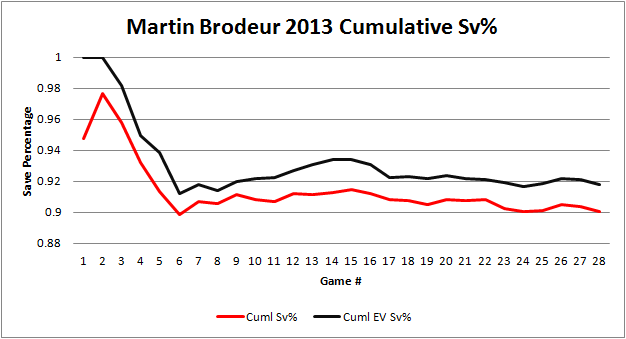 Look at the gap between the overall and even strength save percentage. It's largely followed the same path but it just goes to show how much the PK has undercut Brodeur's overall save percentage and, by extension, the team. Given what the penalty kill looked like during a mass of goals against earlier in 2013, then one may conclude it may not all be on Brodeur. Shape up the penalty kill (or hope for better luck) and his save percentages as well as his performances should be fine in 2013-14.

I can't agree with that conclusion. Four caveats come to mind.

First and foremost is the length of the season. Even if Brodeur didn't get hurt, he would still have a smaller population size of games played compared with past seasons. That matters a whole lot because it means each game can have a larger effect on the save percentage. For example, Brodeur was at an even strength save percentage of 92.1% prior to Sunday's game against the Rangers. Now, it's dropped by .3% and he's suddenly just above average as opposed to being more significantly above league average. On the other side, it means games where Brodeur doesn't let in anything at evens makes his season totals that much better.

A smaller amount of games played can lend itself to larger skews in performance. Let's go back to 2008-09. Brodeur was significantly injured and played in only 31 games. He did so well since coming back that his numbers look wonderful. It couldn't last over a long period of time and we saw that to an extent in prior and following seasons. To put it another way, if Brodeur gets lit up in the next three games, then he's suddenly going to have an even strength save percentage well below league average. If he's hot and stops a lot, then it'll increase. With only so many games played, the noise may still override the true signal of whether Brodeur is truly a league average goalie at even strength.

Second, Brodeur hasn't faced a lot of shots this season. This is in conjunction with the number of games played but the Devils' defense, for all of their faults, have been exceptional at limiting shots against in all situations in 2013 according to Behind the Net. In fact, he's faced less than 15 shots against at even strength in ten of his 28 games this year. While two goals against still counts the same regardless of how many shots faced, the percentage is far different. Two goals allowed out of 11 at evens is going to hurt a cumulative save percentage more than two goals allowed out of 27 at evens. Now, I'm not saying that Brodeur definitely would stop additional shots had the defense been worse. We don't and can't know that. But it is worth noting.

Third, Brodeur will be turning 41 next month and this is truly uncharted territory for goaltenders. According to Hockey-Reference, there have been only 11 goaltenders in the history of the NHL that have played at least one game at age 41 or more. Only four of them have played in recent years: Ed Belfour, Dominik Hasek, Curtis Joseph and Dwayne Roloson. Only Hasek can be described as good among them in his post 41+ career. Forget Brodeur's back spasms keeping him out for weeks this season, his own performance may not hold up over a larger season. Again, he's looked better than his past two seasons at even strength but he could have just been riding a streak. He may not even get there next season or not have enough of them to keep his head above water. He could, but history is on the same side as time and it's not for Brodeur.

Fourth, the penalty kill has it's own variables involved. The Devils have been shorthanded 156 times, the ninth most in the league. Should next season's team improve it's discipline in spots, then there would be fewer shorthanded situations to deal with which could help or exacerbate the penalty kill's performance. While the Devils haven't allowed a lot of shots in shorthanded situations relative to rest of the league, power plays tend to set up shots in advantageous locations and try to catch the goalie unaware. The Devils could be good initially but the moment they break, it's over for them. Additionally, the Devils have only faced 14 different power plays and seven of them are in the upper-half of success rate, including the top three conversion rates in the NHL. Next season, the Western teams could provide some different looks. All of these could help or hurt a PK save percentage even if Brodeur tries to improve in this regard, assuming he even can. So while it does vary, it's not a guarantee it could get much better, slightly better, or possibly worse. We just don't know.

With those four in mind, I still believe that goaltending is an issue to a degree. It's not a main reason why the Devils can set tee times in May, but it's a reason to an extent. Martin Brodeur has performed better at even strength this season with the asterisk of a small population size. He currently compares well with the rest of the league. I'm not confident it can last, though. In any case, I would suggest taking a much closer look at the penalty kill to see whether Brodeur has been the main problem or whether it's something or someone else. It's one more reason to review the goals he allowed. Overall, while I hesitate at the notion of Brodeur being a starter for a full season, I don't currently think he's a major reason why the Devils aren't where we would want them to be.

In the case of Moose, well, he's been calamitous after a hot start in 2013. I would favor replacing him assuming it's even possible. But even while he was a hot mess during a nine game slump that included a six-game winless streak, it's also worth noting that the Devils failed to give him a lot of goal support. Don't get me wrong, Moose has had some truly awful performances but that slump was a team effort, so to speak. I'd prefer to have a capable #1A guy next season - a veteran, I don't want to throw a young guy in the proverbial fire - to split time with Brodeur and then figure out the future in the following season. Of course, goaltending can be a strange thing get a handle on. After all, Jonathan Quick has been just as poor as Brodeur in overall save percentage and worse at even strength and he was super-amazing in 2011-12.