Who's Been Lucky Anyway? PDO & The 2013 New Jersey Devils

While the New Jersey Devils may have been suffering as of late, their 5-on-5 play hasn't been so unlucky. This post looks at the PDO, combined shooting and save percentages, of the team and the players to see who has or has not been fortunate in 2013.

Share All sharing options for: Who's Been Lucky Anyway? PDO & The 2013 New Jersey Devils

We know the Devils have been mired with a four game winless streak. We've seen our favorite team fall in the standings because of it. We have witnessed the Devils' offense dry up in games, though they did come through with three in Buffalo in a 4-3 shootout loss. But are they really just on a run of bad luck? If so, are there any Devils who are particularly fortunate or unfortunate? There is a quick way of checking with PDO.

As the world of advanced stats grew, an Edmonton Oilers fan with the handle "PDO" came up with a quick rule of thumb on determining whether a team or a player was enjoying a good run of luck or not. It is the sum of the on-ice shooting percentage and the on-ice save percentage in 5-on-5, even strength play. If the sum is well above 1, then it means they're likely enjoying a good run of luck. If it's well below 1, then they're suffering from bad luck. Over time, it'll regress towards it's true sum for the team or player. It's not a hard-and-fast rule, but it's a good way of seeing who's been fortunate and unfortunate. Cam Charron has a more complete explanation in this post at Backhand Shelf.

For example, take the Devils' opponent tonight, look at the Toronto Maple Leafs. I noted in the preview that, according to Behind the Net, their five-on-five shooting percentage is 10% and their five-on-five save percentage is at 93%. That yields a team PDO of 1.13 (.10 + .93), which is one of the highest in the league. Charron has tracked team PDO weekly at NHL Numbers (here's the latest post) and the Leafs have been regularly in the top-five. In short, they've been very lucky. Based on this, Leafs fans should temper their expectations because eventually one or the other will fall over time. It unfortunately may not start tonight but it's doubtful it'll hold up for another two months. That's why their poor possession stats should be a cause for concern because it's not going to cushion either percentage's eventual drop.

Now let's look at the Devils. They've been quite good at even strength even though they've went 3-5-2 in their last ten games. Going back to Behind the Net, they have a top-ten even strength team save percentage at 92.3%. Their shooting hasn't been so hot relative to the rest of the league at 8.1%, but it's pretty good. It's still way better than their woeful 2010-11 season. Anyway, their PDO as a team sits at 1.004. It was higher earlier in the season. In fact, it was at 1.008 on February 25, so the last two games drove it down a little. So there has been some on-going regression. Still, they come out slightly ahead of the difference marker. They may slide a little bit, but it wouldn't surprise me if they don't stray too far from where they are. The Devils have been a positive possession team so small changes shouldn't cause too much damage. I am admittedly concerned as to whether Martin Brodeur and Johan Hedberg can continue to combine for such a strong save percentage. But so far, so good from them in the bigger picture of the season.

At the player level, there are some individual surprises at both ends of PDO. I should note that for some reason, Behind the Net only has 20 games for the Devils. They played 21 so I'm not sure why one is missing. I've deduced the missing game was the 2-1 shootout loss to Ottawa on President's Day. I don't believe that one game would drastically affect either percentage for the players so let's look at what is available. The Devils forwards who have played at least five games this season represent a wide range of values. 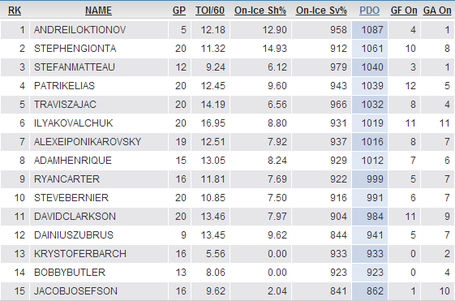 Surprise, surprise, the two bottom players are Bobby Butler and Jacob Josefson. Butler was put on waivers yesterday and Josefson was sent down earlier for "losing his confidence." They got no luck at all at evens. Butler wasn't on the ice for a single goal; only one for Joefson; and both were present for several goals against. The ten goals against with Joseson on the ice suggests he may have had to do with a few of them but that requires a closer look. Nevertheless, they didn't get the rub and so they're being sent down in part because of it. Krys Barch is down here as well namely because of a lack of goals scored when he's out there. That may or may not change since he plays so little and doesn't bring much to the proverbial table.

In terms of regulars below 1000 (Behind the Net's version of 1), Dainius Zubrus didn't benefit from good goaltending before he got hurt, David Clarkson has suffered a bit from it at evens as the shooting percentage dropped, and Ryan Carter & Steve Bernier are just under the mark. Clarkson may get a bounce back and Zubrus might depending on when he returns to action.

The other half of the forwards, and a majority of the current roster, has enjoyed good luck. Andrei Loktionov leads the way since he's been hot after an invisible and uncounted first game as a Devil. He's directly contributed to his high shooting percentage with three goals and two assists and the goaltending behind him has been solid as one could expect. Loktionov has been limited in his usage to a degree but even if that continues, he's not going to stay hot forever. The same can apply to Stefan Matteau even though he hasn't been contributing much to his own percentages; the goaltenders have been fantastic when he's out there. That second goal by Pominville yesterday was the first goal against where he was on the ice. In between the two youngsters is Stephen Gionta, who's arguably having the luckiest shooting percentage on the team at evens. Gionta doesn't contribute much offense himself but it's happened enough when #11 is out there to drive that percentage up.

Most of the top six is above 1000, which makes me worry a little bit about regression. Patrik Elias has been great and getting good help at both ends. Travis Zajac should see his on-ice shooting percentage increase, which makes me concerned that the save percentage may drop in the future (and that would hurt the team). Ilya Kovalchuk, Alexei Ponikarovsky, and Adam Henrique aren't as high as those two but it would do well for all three that they or their teammates generate more shots to take advantage of decent shooting percentages and get goals before the save percentages drop a bit.

On defense, the Devils have a similar split between those fortunate and unfortunate at evens.

Adam Larsson and Andy Greene have continued to take on a lot of defensive zone starts and significant minutes. The duo has been quite fortunate with high on-ice shooting percentages at even strength this season. Larsson and Greene combined only have five assists at even strength (3 for Larsson, 2 for Greene), so much of that is driven by their fellow forwards in front of them. Bryce Salvador may look like he's in trouble a lot but strong goaltending has helped him out. Ergo, he's come out ahead in PDO. His former and should-be partner Mark Fayne is similar in PDO only with a better shooting percentage and a worse save percentage. What should be the top four has come out ahead in this rule of thumb stat.

The only actual-top four guy, Marek Zidlicky, has come out under 1 (or 1000, as Behind the Net) uses. He has not received the benefit of strong goaltending like his usual starting partner Salvador this season. I wonder whether Zidlicky may have had something to do with the 13 even strength goals allowed, but that would require further analysis. Anton Volchenkov and Henrik Tallinder bring up the rear if only because the team has not shot as well they have when, say, Fayne has been on the ice. All three could see a bump in the future while Larsson & Greene look to be due for some eventual pain.

What do you make of the Devils' PDO as the halfway mark approaches? What do you foresee happening to their team PDO of 1.004? Will Brodeur and Hedberg keep that save percentage up or close to it for two more months? At the player level, what should the Devils do, if any, to minimize the damage that could be caused when the luck of some players run out? Does this raise or lessen concerns you may have with the team? Please leave your answers and other thoughts about the team or players' percentages in 5-on-5 play in the comments. Thank you for reading.