With 15 Games Remaining, Where can we Expect the Devils to Finish?

Share All sharing options for: With 15 Games Remaining, Where can we Expect the Devils to Finish?

The New Jersey Devils have 15 games left to play in the shortened 2013 season. They currently sit in 7th place in the Eastern Conference with only two points separating them from 9th place. With the trade deadline looming, the Devils will need to take stock of the team and either choose to be buyers or sellers. Much of this decision has to do with how Lou Lamoriello feels about the team and whether or not they will be able to make another playoff run like last year. So, let's take a look at the Devils' remaining schedule and how they have fared so far this season in scoring against each team and each division. Then perhaps we will see if the Devils will need to make a move at the deadline, especially with Ilya Kovalchuk sidelined for a few more weeks. 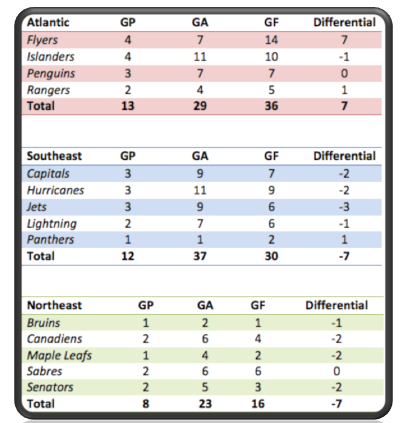 A few quick takeaways, the Devils have scored well against their Atlantic Division foes while struggling to score against Northeast teams. Also of note, the Devils only have a positive goal differential against three teams, the Flyers, Rangers, and Panthers. This is not good for a team that will need to score without their second leading scorer and most talented forward. However, if you look at the Southeast teams, the Devils have played all of there games versus the Capitals, Hurricanes, and Jets, so the negative goal differential isn't too important during the final stretch of games.

So who do the Devils have left to play?

1 Game Remaining:
Of the teams that the Devils have to place twice yet, the Panthers are one of the worst teams in the league and the Devils have a positive goal differential against the Rangers. As for the Bruins and the Maple Leafs, those games will be tough for the Devils to score. The Bruins have great defense as well as a very competent goalie in Tuukka Rask. With those four teams consisting of 3/4 of the Devils' games left to play, However, the Devils have already lost to the Bruins and the Maple Leafs, so I am a little worried that without Kovalchuk, the Devils may struggle to score against these teams. As for the two games remaining against the Rangers, anything can happen given the rivalry between the two teams.
As for the single games remaining versus other teams, only three of the eight teams are currently in playoff contention. Therefore, the single games do not look too daunting for the Devils. Another way to break down the remaining games, is to break down the games left to play against top five teams in the conference, the middle five, and the bottom five.
Looking at this table, perhaps the Devils don't have their work cut out for them. They have seven games against teams that have done really well this season while playing only five against teams that are definitely not playoff teams.
After breaking down the schedule by goal differentials and team standings, I think it's safe to say, the Devils will have a tough time making the playoffs down the stretch. Personally, I see them sneaking into the playoffs in the seven seed that they are in right now. I also see this season coming down to the final game against the Rangers, so it could be a great regular season finale for fans of the Devils and Rangers!
Thanks for reading and describe how you see the rest of the season playing out for the Devils!