This new weekly feature will detail the game by game Devils scoring chance results for a group of games, some recent, some not so recent, as we work towards completing a catalog all of the games in the 2013 season. This week we will cover 3 games: 1.27.13 at Montreal; 2.5.13 vs NY Rangers; and the most recent game, 3.25.13 at Ottawa

Welcome back to what is now surely your highly anticipated weekly scoring chance post. This week we will jump right into things with two early season games and the most recent game, Monday night vs Ottawa.

Monday night's contest against the Senators saw the Devils come away with one point in a game they pretty much dominated for the better part of two periods. The shot totals were skewed heavily in the Devils favor. So was Corsi and Fenwick totals. John detailed all of this information in his recap of the game. Overall, you may notice the scoring chance totals are not nearly as heavily skewed in the Devils favor. This is due to a first period in which they mustered zero total scoring chances on goal.

As an aside-- for anyone who watched the broadcast on Monday night and listened to Steve and Chico discuss "scoring chances", I just want to mention that the numbers they give are misleading. They are not compiled using the standard system we use here at ILWT. I think they counted the Devils for 4 scoring chances in the first period of Monday's game, when they actually had 0.

The MSG numbers have never matched my totals, and probably never will. Now, there is some variance in scoring chance counts, as there are subjective elements to it. Two people, both with experience in counting chances, could watch the same game and still not come up with exactly the same totals. This is not what accounts for the differences between the MSG count and mine. They have some sort of alternate methodology which I am not entirely clear on and also don't put much value in.

Okay, rant over. Now, back to the totals from Monday's game.

The Devils did really dominate from the second period onward. At the individual level, there were a few players that really stood out. John talked about all these guys in his Corsi / Fenwick discussion. In these cases, the chance totals correlated strongly. Andy Greene was a pretty absurd +11/-2 for a +9 total. Marek Zidlicky dazzled with his individual effort on the goal, and overall posted +8/-2 for a +6 total. Adam Henrique has been getting after it real hard lately. His game seems to be hitting a higher gear lately, and you can see the focus in his eyes as he gets after every loose puck with a vengeance. Not surprisingly, Henny was +6/-0 for a +6 total. As good as Henrique was, Adam Larsson was pretty much equally bad with a +1/-7 for a -6 total. All of these results are unsurprising based on John's review yesterday. 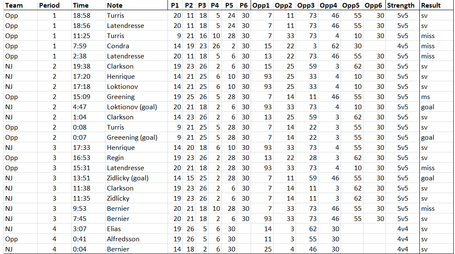 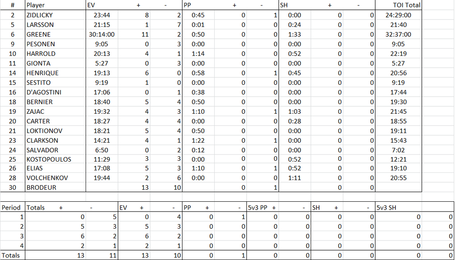 This next game happened so long ago, it involves names like "Tedenby". The Devils came out slightly behind in this game overall, but recovered after a very poor first period in terms of chances. If my memory serves me correctly, that's exactly what happened in the game too. The Devils got absolutely run over in the first period and then kind of evened things out as the game went on. The worst Devils on this day were Josefson (+1/-6 -5), Greene (+1/-5 -4), and Salvador (+4/-7 -3). Interesting how different our team looked at this point in the season to the 18 skaters that took the ice Monday. 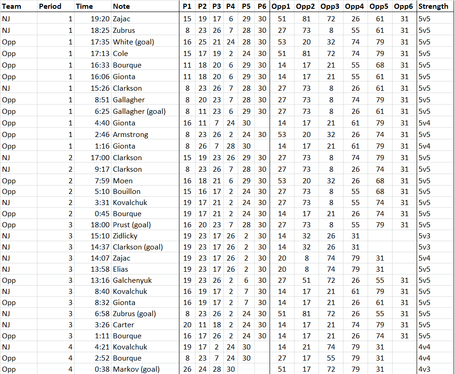 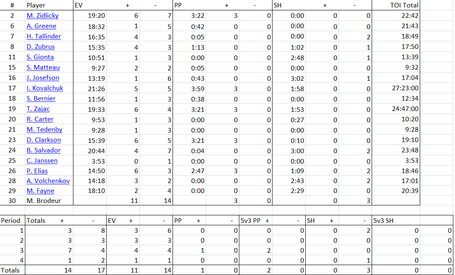 This was another early season game, and in this one, the Devils didn't fare so well in the scoring chance department. Fortunately, they fared better on the scoreboard, pulling out a 3-1 victory. For the most part, everyone pretty much just came out slightly behind in even strength chances this game, except for Bryce Salvador, who came out way behind (+2/-7 -5). This game should bring back fond memories of the days when David Clarkson actually scored goals. 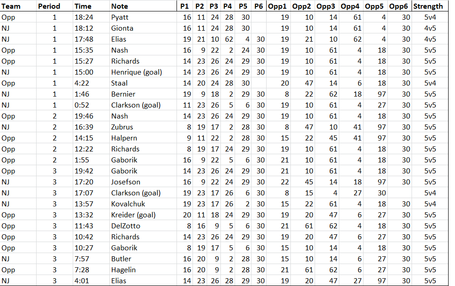 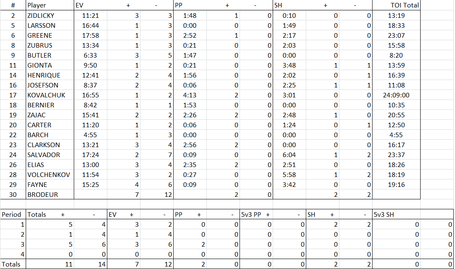 Well that brings us to the end of this week's review. Thanks, as always, for reading, and please begin discussing all things scoring chances..........now.