David Clarkson has been ice cold in recent weeks and will become a free agent this summer. This post looks at his career shooting percentage and shots per game rate to highlight streaks and his overall rising trends.

Share All sharing options for: David Clarkson Won't Be Cold Forever: A Look at Clarkson's Career in Shots & S%

David Clarkson is in the middle of a very important year. He has been moved up to the second line at right wing for this season and has not moved since. He remains as the team's leading goal scorer this season with ten. His current contract with the New Jersey Devils is in it's final season. He'll turn 29 in the end of March. He just played his 440th career game, regular season and playoffs, all with New Jersey. He can become an unrestricted free agent this summer. So it is incredibly disappointing for the Devils, Clarkson, and his potential future earnings that he has not scored a goal in his last twelve games.

I bring you good news: Clarkson will not be a cold shooter forever. In fact, he's had colder streaks in his career as a New Jersey Devil. However, he's also not the hot shooter he was throughout the 2011-12 season. Here's Clarkson's shooting percentage throughout all 440 appearance he's had with the Devils, from his debut back on March 15, 2007 to his most recent game this past Sunday. 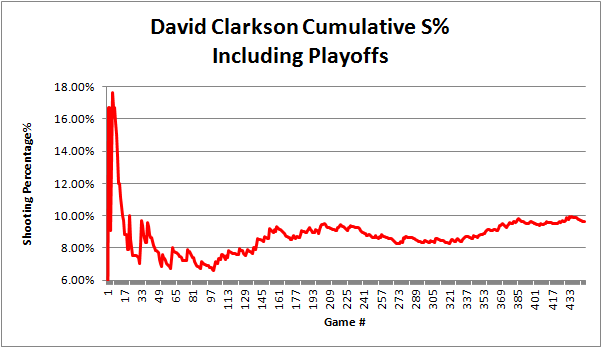 Clarkson started off with a relative bang but reality set in hard during his first two full seasons with the Devils. He got as low as 6.63% at the start of the 2008-09 season. But from that onward, it's been improving to what is likely his true shooting percentage. The 2010-11 season dragged it down, but 2011-12 brought it up and it's peaked within this very season to 10.08%. Clarkson's current cold streak of twelve games has dragged it down to it's current percentage of 9.63%. For what it's worth, the playoffs have damged Clarkson's shooting percentage. If we ignore playoff games, he's at 9.74%, which is a bit better. Based on this graph, it's not unreasonable to think that Clarkson can continue to shoot somewhere between 9-10%.

What about his rate of shots on net? The good news is that Clarkson has shown improvement over his career. 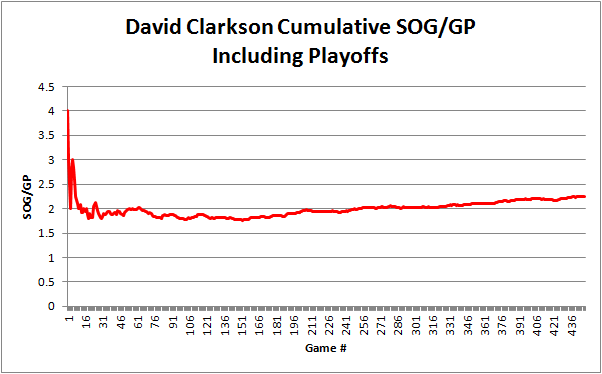 Clarkson didn't average over two shots per game in a season - his call up in 2006-07 excepted - until his injury-shortened 2009-10 season. From each season since, including this current one, Clarkson has improved his shots per game rate. In fact, he's currently averaging over 3.5 per game, which is right up there with the likes of Ilya Kovalchuk. His cumulative rate got over two per game until the middle of that ugly 2010-11 season and it keeps on rising. He still ways to go before he's averaging 2.5 shots per game in his career, though.

Now, you (or a strawman) may be thinking, "Of course he does. Clarkson's role on the team has increased over the years and, more importantly, Clarkson has improved as a player. How is it fair to include those earlier seasons?" A fair question. Clarkson has improved over the years; he's not the same player now that he was back in 2007-08. He wasn't relegated to fourth line play since the 2010-11 season. So let's pare his career down to the 2011-12 season, 2012 playoffs, and this current season (130 games total) and look at what those graphs hold. 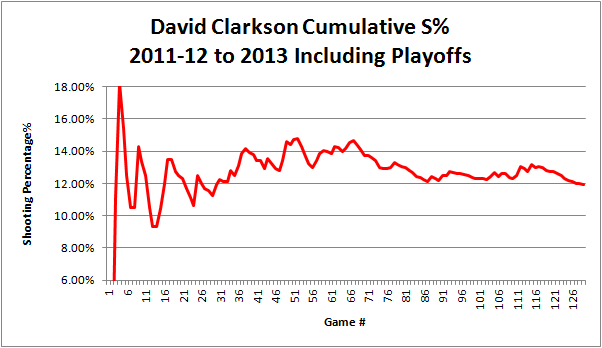 Clarkson was shooting at a fantastic rate throughout the 2011-12 season. The playoffs - games #81 through #104 - really dampened things. His hot start to this season got him back up to about 13%, but his current cold streak is dropping him below 12%. 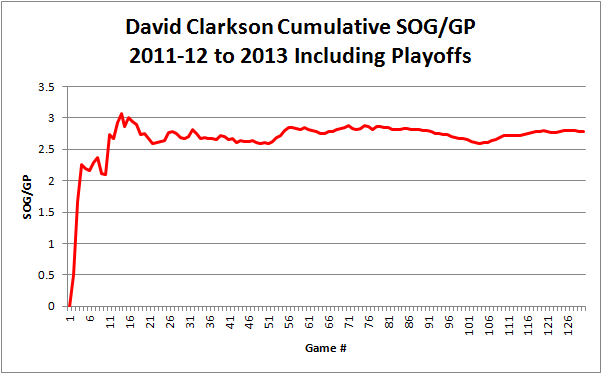 In Clarkson's last 130 games, he's been firing away just as we're used to. He's been fluctuating between 2.5 to 3 shots per game. His only low point would be the latter half of the playoff run, when he just wasn't as successful at getting pucks on net as he was earlier. This current season has bounced his rate back up, though, to 2.77 per game. Again, Clarkson's current rate is well over three per game. I think that's a result of a few factors: more ice time, regularly playing with a possession driver and all-around great player in Patrik Elias, and Peter DeBoer continuing to encourage him to shoot whenever he's got a lane. That latter point, in conjunction with Clarkson's growth as a player, may help explain why his shots per game average has soared under DeBoer than in past seasons. This and the prior graphboth make Clarkson look great. It wouldn't surprise me if a fan of the team who signs Clarkson this summer points to them and say, "We got a producer." It wouldn't surprise me if Clarkson's agent is highlighting his recent play, something he should do anyway.

However, I'm not comfortable at just looking at his past season, the 2012 playoffs, and this season. First of all, 130 games isn't really a lot to try and see what his future may become. It's a season where Clarkson got hot, a playoffs where he wasn't, and a current season where he started hot and now can't buy a goal to save his life. Clarkson has certainly improved as an offensive producer but for all we know, he could have another season like 2010-11 where he does average over two shots per game and most of them don't go in. Second and related to the first point, we can't just ignore the past because it doesn't fit in right. Anyone doing their homework on whether to sign Clarkson will note that those earlier seasons may not mean as much as his current ones, but they'll still be aware of what happened. Those earlier seasons are necessary not only as a worst-case scenario, but also as the evidence of Clarkson showing improvement in the last two to three years. While I can't guarantee what Clarkson's true shooting percentage, it's definitely not just under 12%. Clarkson could keep up a rate over three shots per game, provided he's playing with guys like Elias and gets significant minutes with them. That's more possible, except guys like Elias aren't common.

Anyway, let's get back Clarkson's career. Since he played 440 total games, I broken down his game-by-game totals into 24 sixteen-game sets. As with the chart in the post about Kovalchuk's shooting percentage, the game count goes 1-16, 17-32, etc. 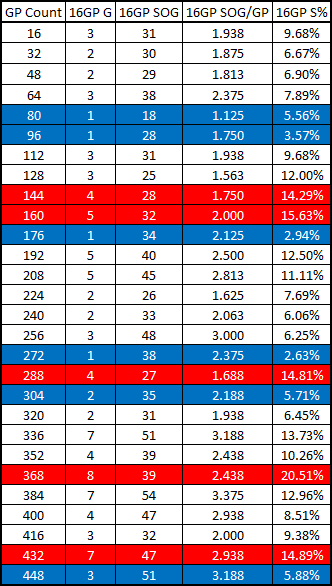 Perhaps my bounds for what was cold (sub-6% shooting) and hot (over-14% shooting) are too loose for Clarkson's shooting percentage in each set. Still, his 2013 season is right in the last two sets of this chart. While set #432 began in the 2013 playoffs where Clarkson did little with respect to scoring or shooting, it did include the bulk of his ten goal rampage from this season. This current set had the end of it, followed by twelve games of nothing. Interestingly, Clarkson's been shooting the puck more in the midst of his cold streak so he's been fighting through it in this bigger look at it. His current streak, though, is his first really cold one since the 2010-11 season. Clarkson was less successful in shooting percentage earlier in his career. His first real hot streak came in 2007-08 and it really only lasted for a part of that season.

You can see the big change in shots per game from set 336 and onward: Clarkson's shots per game have jumped up and it just so happened that the goals started to come in. That set begins early in the 2011-12 season and, again, Clarkson really hasn't looked back save for game set 416, which was in the 2013 playoffs.

Representing this big chart in graphs really showcases the up-and-down nature of his shooting percentage. His shots per game rate by set also fluctuates, but it's easier to see a base improvement there in the later sets. 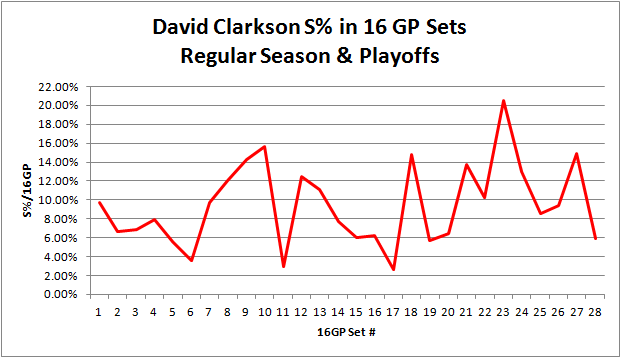 Again, Clarkson's shooting has gone through peaks and valleys. He peaked earlier, now he's suffering. Again, the good news is that it won't last forever. We can see it from earlier in his career. The big question is when will it peak again, and how much will it be? 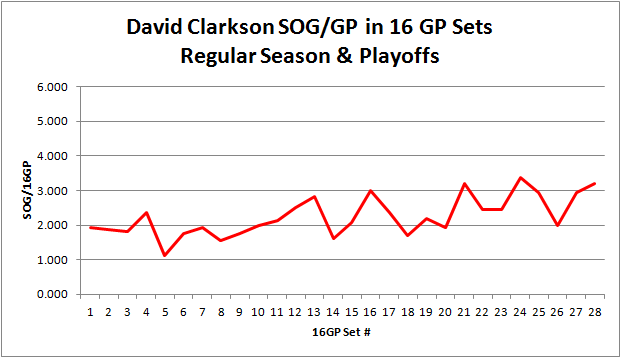 Clarkson's valleys in shots per game rate hasn't dipped below two since the middle of the 2010-11 season. He's gone above three per game a couple of times and he's currently there now. That won't last, but the fortunate news is that it won't drop too much given his role, his instructions, and who he plays with - provided that all doesn't change as a result of his current cold streak.

In the short term, we have every reason to believe that Clarkson will score again. He has been shooting so many pucks on net this season that he'd have to have abysmal luck for the rest of the season or just stop shooting to just get one or two more. I don't think he'll necessarily get hot, but he'll get more than a couple before the end of April. When exactly will it happen? I do not know. I hope it's tonight. But based on his past shooting percentage, it will happen.

In the long term, the big question teams will be asking is whether Clarkson can maintain his current rates. It's clear he's improved as an offensive player in that his shots on net has improved in recent seasons. His cumulative shooting percentage has risen to a not-unreasonable level. However, I also believe he's currently breaking the three-shots-per-game plateau largely by getting more minutes and playing with Elias, who's he really benefited from this season. I also think his 2011-12 shooting percentage flatters him. Some of those 30 regular season goals were legit, but others were more like flukes. The 2012 playoffs saw that percentage drop to Earth and his current cold streak can be seen as correcting for his earlier hot streak this season. He may very well turn out to be around a 10% shooter and could reliably average over two and half shots per game for the next few seasons. But any GM would have to make sure they have personnel he can work well with to get the most out of him as well as hope that this isn't his peak. Even if both are true, he may not get thirty goals again in a season. Twenty to twenty-five depending on streaks would be more reasonable. As fine as that may be, the interested team will have make sure they determine and value the rest of his game outside of production. In that sense, it is important for Clarkson to showcase he can do more than just shoot and score. He does play with a physical edge; and given how some overvalue that, that may be enough. In the meantime, let's just be glad when he eventually scores.

What do you think about Clarkson's shooting percentage over his career? What about his shots per game rate? What do you owe his improvement to? Can he keep it up or do you think he's peaking now? Please leave your answers and other thoughts about Clarkson in the comments. Thank you for reading.