Ilya Kovalchuk's Shooting Percentage as a New Jersey Devil; or Why He Won't Thrash Again

Ilya Kovalchuk just played his 210th regular season game as a New Jersey Devil on Saturday. After going through each of his games, this post goes into why Devils fans shouldn't expect his hot shooting percentage from Atlanta to return though he will shoot the puck a lot.

Share All sharing options for: Ilya Kovalchuk's Shooting Percentage as a New Jersey Devil; or Why He Won't Thrash Again

Ilya Kovalchuk scored two goals out of seven shots in yesterday's 6-3 loss at Carolina. The game itself was Kovalchuk's 210th regular season game as a member of the New Jersey Devils. That's not normally a milestone, but it does make it easy to highlight a part of Kovalchuk's tenure as a Devil: his shooting percentage.

With the Atlanta Thrashers, Kovalchuk was a scoring machine. He scored 328 goals in 594 games with the Thrashers. His lowest shooting percentage in a season with Atlanta was 12%, when he only scored 41 goals in 341 shots on net. His highest with Atlanta was 18.4%, when he put up 52 goals out of 284 shots on net. After the Devils acquired Kovalchuk in 2010, he has been a big producer for the team but his shooting has not been as successful. What can we expect from Kovalchuk going forward? With 210 regular season, I've calculated and graphed his cumulative shooting percentage as a Devil: 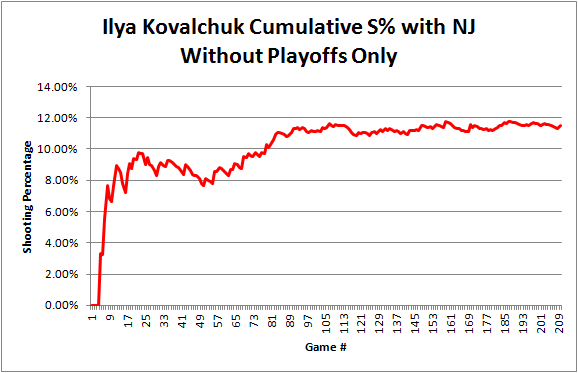 Before the game against Winnipeg on Sunday, Kovalchuk's cumulative shooting percentage was at 11.49%. His 2-for-7 scoring performance on Saturday bumped it up from 11.33% to 11.49%, but with more games played, the less one game will affect his whole performance. As you can see, over time, his percentage has been solidly above 11% but under 12%. There are fluctuations that move him within that 11th percentile. For the most part, no Devils fan should expect him to to fire them in at the rate he did as a Thrasher.

The good news is that shooting between 11-12% in the regular season isn't terrible for production provided the player takes a lot of shots. Like another 10-12% shooter named Zach Parise, Kovalchuk has always been able able to put up volume on the shot count. Here's his cumulative shots per game rate as a Devil in 210 regular season games. 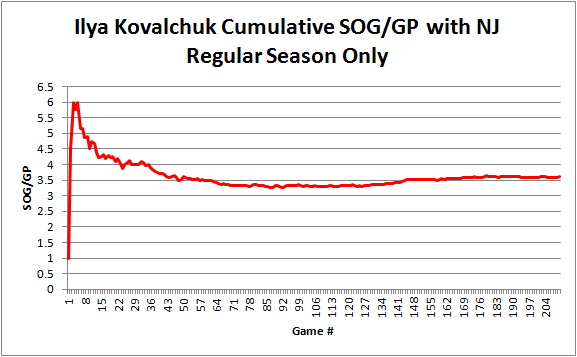 Kovalchuk is currently at a cumulative shot per game rate of 3.6. When joined the Devils, he was firing away but over time, the rate dipped a bit. It's been improving for the last 60 games or so. The whole way, he was well above three shots per game so he was still among team leaders - if not the team leader - in shots on net. As long as he keeps putting rubber on net regularly, he'll get goals. The good news is that after 210 regular season games, that looks to continue for quite some time.

What about the playoffs? I didn't include them namely because that would require waiting for more games to be played for an even number for what I'll show later. Also, it didn't have that much of an effect. Before Sunday's game against Winnipeg and including playoffs, his cumulative shooting percentage was a touch lower at 11.47%. His cumulative shots per game rate was a little lower at 3.55. The larger point remains the same: Kovalchuk isn't the hot shooter he was in Atlanta and likely won't be again. He'll still be productive because he does have a good shooting percentage as a Devil and has a high shooting rate.

Kovalchuk's cumulative shooting percentage and shots per game rate over 210 games tells us what we should expect from him in both stats going forward. However, as we've all witnessed, players don't just shoot at their cumulative shooting percentage or put pucks on net based on their cumulative shots per game rate. They fluctuate from game to game. Players go on hot streaks, cold streaks, and their numbers vary from game to game. Kovalchuk is no different. He's had several games with five or more shots on net and no goals. He's had games where he only took one or two shots, but scored. In order to show this phenomenon, I've broken up Kovalchuk's regular season totals into 21 ten game periods. Here's a chart listing how much he's scored, how many shots on net, and his rates in both. (Note: Game Range 10 means games 1-10, 20 means games 11-20, etc.)

Incidentally, I do recognize the weakness of a ten game period in that one game can make a bigger difference. Kovalchuk was shooting at 5.7% with two goals out of 35 shots in most recent period before scoring two goals on seven shots against Carolina. That bumped him up to a more reasonable 9.52% shooting percentage. The period of games allows for Kovalchuk to be ice-cold and score nothing for, say, six games in a row and then score a couple before and after to make it look like he's been OK. In the bigger picture, he has been. With the game-by-game focus we have as fans as well as writers and readers of this very site, it can get lost in time and data.

Lastly, just to hammer home the point that streaks come and go, here are his shooting percentage and shots per game rate graphed over each period of ten games. This visually displays his highs and lows stated in the chart: 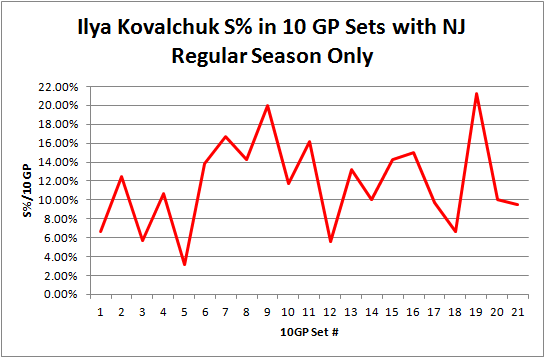 Kovalchuk peaked with games #181-190. He shot very well at the end of last regular season and produced at the very beginning of this season. Most of this season has been games #191-210, however, and so the percentage took a massive drop from it's dizzying height above 21%. As great as Kovalchuk is, he cannot overcome the unsustainable. 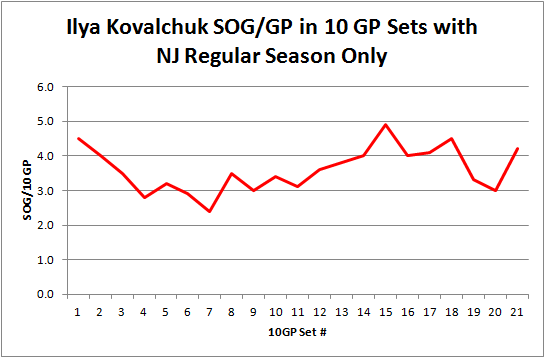 His shots per game rate has mostly remained at three with each ten game set with only two exceptions way earlier in his career as a Devil. He's touched three shots per game exactly twice, including a ten game set within this season. After a high shooting first twenty games, it wasn't until about January in the 2011-12 season when he broke the four shot per game rate mark. He's got above that mark in recent games, though the goals have been few and far between until Saturday's game. Still, it'll be interesting to see where it'll end up over the next few games. I think it's a safe bet it'll be higher than three based on his past in New Jersey.

So if you're expecting Kovalchuk to go on a tear, then at some point you'll turn out to be right. However, it could vary within a season. So far in this season, he started off hot, cooled off, and just broke a cold streak recently. Over a season or so, he's going to likely end up above 11% but below 12%. That's important to keep in mind in the long term as we set our expectations for how many goals Kovalchuk will score. It's also important that he has kept shooting at a relatively high rate compared with his teammates. The volume of shots will lead to goals, even though he's not the shooting at the percentage he was at in Atlanta.

Are you disappointed that his cumulative shooting percentage in the regular season has not and likely will not be as high as it was earlier in his career? Or are you more accepting of these findings, knowing that as long as he shoots a lot, then he'll always be a top scorer on the team? Please leave your answers and other thoughts about Kovalchuk's shooting percentage and shot rate in the comments. Thank you for reading.