The Devils sold out their first four home games and have finally righted their financial ship.

The New Jersey Devils have gone from near bankruptcy to the Stanley Cup Finals. I'll recap the problems the business has faced and what direction the business is going and the first five game's attendance figures.

Over the last few seasons, there have been ongoing reports that the Devils were in trouble financially. As it is with any Devils news, there was a shroud of mystery and only a few snippets of truth were released to the public. Eventually the rumors got so intense there was talk of the Devils going bankrupt.

Right on cue the Devils had a great season and an even better playoff run. The run to the Stanley Cup Finals brought in millions of dollars of extra playoff game gate revenues. The playoff run also increased the local and even the national interest in the team. In total, the Devils pulled in $122 million in revenue and turned an operating profit of $3 millionduring the 2011-12 season. So, for those of you who aren't savvy to the business side of hockey, the Devils made a lot of money that they weren't necessarily expecting this season.

Then, early in 2013, rumors were put to rest when Jeef Vanderbeek restructured the $230 million of debt and bought out the other owners of the team. Essentially, Vanderbeek became the sole owner and bought the Devils some time with their debt payments.

However, the entire NHL was then dealt another blow with half the season lost to a silly, avoidable lockout. Therefore, it was unsure if the increased interest from a playoff run would still help to fill up the Rock once the season resumed. The Devils have had five home games and we have our answer. The Devils fans are back, and they're back in throngs.

Above are the attendance figures through the first five games for each Devil's season since they moved to Newark. If you didn't notice, the Devils sold out the first four games of their season! Clearly the playoff run had a greater effect than the lockout. Even the fifth game of the season was an improvement over the last three seasons. According to ESPN, the Devils are 23rd in average attendance this season, but this is simply due to the fact that the Prudential Center is not as large as some of the other arenas in the league. For those of you who would enjoy a graph of the totals, check out the beautiful excel chart below. 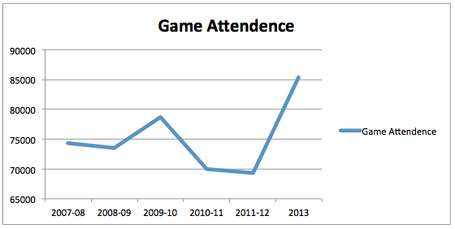 It may be early in the season, but if the Devils continue to bring in fans anywhere near this rate, the Devils will be very fortunate and will continue to be able to spend to the cap if they wish. Currently, they have the 9th most cap space available in the NHL. According to Capgeek, they have just over $13.5 million in cap space. While I'm not saying teams need to spend to the cap to have a good team, but good player's cost money, and with solid attendance numbers and solid ownership, the Devils are on a good path financially. Also, the flexibility for Lou Lamoriello to wheel and deal during the season, without a limit, is also a major asset to the Devils.

Obviously, a strong fanbase can also do wonders for a team. Having home ice advantage is even better when the fanbase can help to intimidate an opposing team. Not only that, but when a team has a strong crowd behind them, they are more willing to fight through the blood, sweat, and tears to win for their fans. Some fans believe in these intangibles while some think home ice advantge is lost in this day and age. Finally, the strong uptick in game attendance and an increase in profits is great news for the fans. This means that Lou has some wiggle room and should the Devils need to make some roster moves, they have the room. All of this means the Devils have a solid future in New Jersey, and hopefully more years of consistently making the playoffs!