After recapping last night's 3-1 win by the New Jersey Devils over the New York Rangers, I got curious about what really happened at even strength and made Corsi charts to see what happened. This post shares my findings, including how the Rangers didn't dominate at even strength.

In my recap of the Devils' defeat of Our Hated Rivals, I brought up score effects regarding the disparity of shots at even strength. The Devils were up 2-0 after the first period so it stood to reason that the Rangers would push the issue and generate more shots and attempts from then on since they were losing. I also pointed out some players that I thought did well like Adam Larsson and some players that I thought didn't do so well, like Michael Del Zotto.

Of course, after putting up the recap, I got curious about what I just wrote, especially about that first point about score effects. Did the Rangers really out-perform the Devils at even strength? I also wrote quite a bit about how the Devils had opportunities to get shots on net, particularly in the second period, but didn't. That would lead one to believe the period was mostly Ranger hockey when it really wasn't that lopsided by my observation. However, why rely on observation and anecdotal evidence when we can count the Corsi events and have some actual evidence?

For those who don't know, Corsi counts up all shots, blocks, misses, and goals, usually at even strength in non-empty net situations. The differential of all Corsi for and against suggests whether the player got pinned back or pushed the play in a positive direction. Thanks to a template provided by Robert P of Jewels from the Crown, I've been putting together charts of both teams. I put them into my away game recaps as I have more time to do them. I don't know if I'll make a post after home games of just the Corsi chart but I wanted to do it for this game if only to show what I've learned. The game was closer at evens than a 21-14 shot differential favoring the visitors would indicate and some of the players I thought did well or didn't do well didn't match up with the Corsi differentials.

First, the Rangers only led the Devils 34-27 in Corsi. It was 6-5 Rangers after the first period, 15-12 Rangers after the second, and 13-10 after the third. With period-by-period differences of one, three, and three, there's no significant indication of score effects changing the course of the game. Yes, the Rangers had the reason to push ahead but the Devils did enough to stay close with them in terms of attempts. The visitors had an edge, but they did not dominate. I think that is in favor of the team who led for 55 minutes of the game.

Even though the Rangers out-shot the Devils 9-4 in that second period, the attempts in that period forces me to reconsider what I wrote about missing opportunities in some sense in the recap. I thought the Devils wasted chances to get shots and there were plays where open lanes were left begging. However, it appears they made more attempts than I thought and they just didn't get to the net. That would have been a more accurate observation (though still a little bothersome).

Now let's get to the charts. First, here's the Rangers: 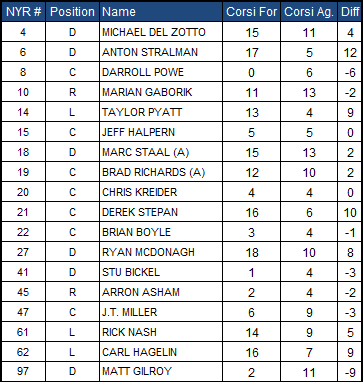 Needless to say, I did not give the due that their second line deserved. While Marian Gaborik, Rick Nash, and Brad Richards had effective shifts and racked up shots on net, they were only somewhat positive in terms of Corsi tonight. The unit of Derek Stepan, Carl Hagelin, and Taylor Pyatt really put in a lot of work and spent more time in New Jersey's zone than I thought. I did recall Hagelin getting stoned in the third period but I failed to realize how much I really saw 14, 21, and 62 in New Jersey's end.

I also should apologize to Del Zotto. While there were times where he looked ineffectual, he was a positive Corsi player. He was utilized late in the game quite a bit for his offensive capabilities since the Rangers were down two scores. Del Zotto did not hurt them in that regard. Additionally, Anton Stralman took a lot of those shifts where the Rangers generated offense and so he came out very well in terms of Corsi. Stralman was alongside Ryan McDonagh for this game and the duo was successful at evens.

I will point out that the Devils were successful in some small part against their bottom six and their third pairing. Matt Gilroy got wrecked, Darroll Powe's first game as a Ranger wasn't very good, and they generated so few events for the Rangers that a few Devils events surpassed them.

Onto the Devils chart, where I'm going to facepalm myself in advance for noting how solid Adam Larsson looked in my recap: 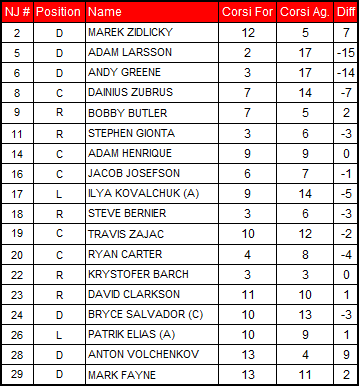 A more accurate way to describe Larsson's and Andy Greene's performance was solid despite spending so much of their ice time in their own end. They took the brunt of the Rangers' top two lines and didn't really get things moving forward at evens. In a way, it's impressive that they played so much in their own end and that they didn't make any really horrific errors. At the same time, if anyone should congratulate Martin Brodeur for his excellent night, then these two are near the top of the list. At least, Mark Fayne's +2 justifies my calling of him solid. So does Bryce Salvador's -3 since Salvador is usually far worse than -3 this season.

Surprisingly, Anton Volchenkov and Marek Zidlicky had very high Corsi differentials. They each played less than 12 minutes at evens. They may have saw the worst the Rangers had to offer plus were out there for some good shifts by the Devils.

The Devils' Corsi chart also shows that the line of Patrik Elias, Adam Henrique, and David Clarkson were the best in possession tonight. OK, the fourth line of Bobby Butler, Jacob Josefson, and Krys Barch combined for +2 like the Henrique unit. However, the Henrique unit had far more ice time at evens, they generated more Corsi events for the Devils, and they did score two goals. Therefore, I'm comfortable giving them an edge over the fourth line. It could have been much better had the two players not named Clarkson fired the puck more when they had the chance. The other top line of Travis Zajac, Dainius Zubrus, and Ilya Kovalchuk were negative tonight. They did see plenty of the Rangers' top players but they just were caught back quite a bit while not generating as much going forward. Zajac and Zubrus were big offenders of "passing when they should be shooting," so it didn't have to be this negative. But it was.

Lastly, I want to point out the CBGB line. As much as I liked Gionta's hustle and his PK work, it didn't really go anywhere. Ryan Carter and Steve Bernier followed suit by being doubled-up in the wrong direction for Corsi. Gionta, Carter, and Bernier were -3, -3, and -4, respectively. This is their fourth game where all three forwards were negative in Corsi. Here's their previous eight games from this season: 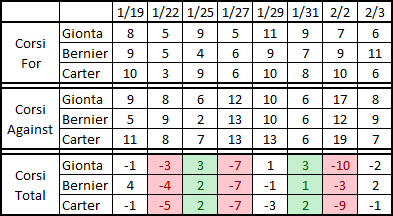 They were about as bad as they were against the Flyers back on January 22nd. It's worth noting that the entire line hasn't been on ice for a goal against at evens. Carter and Gionta have, but not Bernier. Still, they were . Not only that, but they generate very few Corsi events (shots, misses, blocks, and goals) for the Devils tonight. It was low relative to most of their previous seven games. So, yes, they didn't give up a lot of events against, but like the Rangers' bottom six, they weren't effective enough going forward so they still ended up defending more than attacking at evens. It's further proof that the line is truly a fourth line.

The main point from these Corsi charts from last night's game is that the Devils were not definitively beaten at evens. The Rangers had an edge but they were small and only built up period-by-period. Few Devils really did well in Corsi but only Larsson and Greene were deep in the red. On the flipside, the Rangers' second line performed far better than I thought; Del Zotto wasn't the black hole that, say, Matt Gilroy was; and their bottom six was just as ineffective as the Devils'. Again, I'm not sure if I'll be doing this as a regular feature, but let me know what you think all the same. Does the Corsi counts at even strength from last night change your opinion on last night's win, or did it confirm what you thought? Who surprised you by their Corsi differential, good or bad? Why do you think the Rangers didn't start dominating at attempts after they went down at least one goal? Please leave your answers and other thoughts about the Corsi from last night's game in the comments. Thank you for reading.