The New Jersey Devils have been one of the most disciplined teams in the NHL in the last seven seasons, but so far in this season they're far from it. This post briefly explains how bad it's been and what calls they've took.

Share All sharing options for: Eight Games In and the New Jersey Devils Have a Penalty Problem

One of the common outcries from any team in any game is when a penalty is called. Either we, as fans, lament the ref making a weak call; or we lament the player for taking the call. In the case of the latter, we bring up the importance of discipline. The value of knowing the rules and playing within them. This is because when a penalty called against a team, it usually gives a power play to the other team. Sometimes the team with the man disadvantage gets scored on to pay a price on the scoreboard for the penalty. This can decide games. Most of the time, the penalized team gets away with it without a goal against. We call this penalty killing because a success requires stopping the opportunity dead. Sometimes it's by good fortune, good goaltending, or just good positioning. However, even if it's a success, it's time spent in the game where the penalized team is down a man and cannot attack as usual. They are largely forced to defend. That's one more reason why the best kind of penalty kill isn't in limiting shots or just not giving up a goal, it's not taking a penalty to begin with. It's why reffing and discipline are issues even if the penalized kills a majority of their chances.

The New Jersey Devils have a very successful penalty kill so far in the 2013 season relative to the rest of the NHL. Their success rate is 85%, which is eighth in the league after Sunday's games. It's important that they have killed as many penalties as they have in their first eight games. They're one of the more penalized teams in the league. They're twenty-first in the league with 43 minor penalties and tied for twenty-third with 40 shorthanded situations. While some of those penalties were questionable calls by the ref, the vast majority of them were the fault of the Devil who got called. In that sense, we largely blame discipline for these high counts of penalties. And compared to past Devils teams, they are. Here's a chart from 2005-06 through this season minor penalties, bench minors, and times shorthanded. 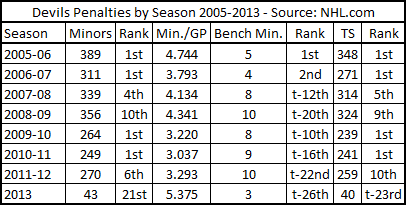 The Devils have been one of the best disciplined teams in the league for several past seasons. They have never finished outside of the top ten for fewest minor penalties or fewest times shorthanded (TS). In four of their last full seven seasons, they led the league in fewest minor penalties and fewest times shorthanded. Only in bench minors did they not rank so high, but even so it's only ten calls at most out of many more in a season. So far in this season, the Devils are not only in the lower third of the league but they have been averaging more minor penalties and shorthanded situations per game than any of their last seven seasons. All of that can't be explained just by tight reffing. Based on many of the individual calls, that's on the team. If you think the discipline of the team has been worse than you recall, then you're right. Clearly, it's a problem even with their good penalty killing success rate.

In looking in the past, it's very important to note that penalties happen. Players are human and they make mistakes. There are a few times where it was necessary to foul them; but most of the time, it was a poor decision they didn't get away with. Even the bench takes a few calls, as annoying as those can be. Everyone in the league has to deal with it. Even when the Devils were leading the league in taking the fewest minor penalties, they averaged at least three minor penalties per game. They averaged at least 2.9 shorthanded situations per game. Therefore, it's foolish to demand that the Devils take no penalties at all. They are going to happen, regardless of how tight or loose the referees want to call a particular game.

However, it is not foolish to expect improvement. Many of the penalties the Devils have taken can be avoided. In order to identify which kinds they should focus on, I've counted how many of each type of penalty they have taken. Bench minors are in italics. 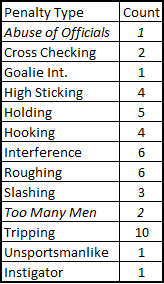 So far this short season, the Devils have taken thirteen types of penalties. Two are from the bench: two calls for too many men on the ice and one for abuse of officials. Over the course of the season, the former can happen. The latter is entirely avoidable, though. The rest are largely stick and physical fouls. Out of the 43 non-bench penalties, only two were of some other kind: an unsportsmanlike conduct call on Patrik Elias in the January 31 game against the Islanders and an instigator for Krys Barch on February 3, also against the Isles.

The 23 stick-related fouls (slashing, tripping, hooking, cross-checking, high-sticking) are led by ten tripping calls; the Devils have had at least one in every game this season except for the January 29th game at Boston. If there's one call the team can try to avoid, I would start with that one. Cutting down on the others would help, but the trips really need to be reduced. In general for the stick-related calls, better positioning is what I would think would work. A player gets tripped because they're trying to get at the puck through a player - which usually won't work - or they got beat and it's the only thing the defending player can do. If they were in a better position, then they could contain them instead of having to take them down. The same applies for many of the other stick fouls. If you don't get beat, then you don't need to restrain them with your stick. That would help.

As for the 18 physical fouls, the Devils have split nearly evenly between roughing, holding, and interference. I would like to see the interference calls come down the most as that involves hitting players away from the puck, which I would think can be avoided more easily than just grasping a guy in your personal zone. It is with these where I think discipline really applies mentally; the Devils skaters just need to be aware of who can and cannot be contacted, when, and how. When they don't have their minds right, then these sorts of penalties come up because they just aren't fully aware of what they're doing. This applies to some degree for the stick-fouls, but I think more so for these kinds of calls. It can also just help keep their cool when talking to the refs.

I know it's only eight games into the season and over time, and so some games like the penalty-fest against Philly and yesterday's game against the Islanders easily juice the totals. I understand that there have been more power play opportunities than usual in this season according to this article by Derek Zona at NHL Numbers. I agree that the penalty kill has been very good for the most part. However, the Devils have themselves largely to blame for averaging five shorthanded situations per game. And it will lead to more difficult games, if not losses, if it's not addressed. Again, penalties lead to shorthanded opportunities where at worst the other team scores or at best the team's defending for most of that time. There's plenty of time and room for improvement to cut down on both possibilities. That's going to take more than favorable refs, I believe that will require better positioning and restraint. In other words, improved discipline.