The New Jersey Devils lost 4-2 to the Winnipeg Jets on February 24, 2013. This post explains how the game was even in Corsi, why that speaks badly on the Devils in the third, and who did and did not stand out in terms of Corsi differential.

Consider this a follow up to what happened on Sunday in the 4-2 loss the New Jersey Devils suffered at the hands of the Winnipeg Jets. As indicated in my recap, I was disappointed with how the team performed, especially in the third period. It started off with a one-goal deficit, the Devils put two shots on net, the Jets tacked one more on to make a two-goal deficit, and the Devils responded with a whopping three shots on net. Even when they gained the zone, attempts were few and far between. The passion and desire to at least try and mount a comeback was missing from my eye. However, I did not determine if that was true or not in terms of shooting attempts. In order to address that as well as add a request by user dr(d)evil in the comments, I've now made the Corsi charts for this game.

For the unaware, a brief explanation. Thanks to Robert at Jewels from the Crown, I can make charts for the individual shooting attempts for and against each player and the team from a game's play by play log from NHL.com. I try to do this in the recaps for away games and make them for the home games later on. The charts clear up what has happened when a player was on the ice at even strength with respect to goals, shots, misses, and blocks. Typically, this is done for even strength situations to avoid special teams skewing matters. If a player has a positive Corsi differential, it means the team put up more attempts than it faced when they were out there. That implies the team had the better of possession, which is good and desirable. If it's negative, it means possession was often going against the team, which isn't so good. It's not the be-all, end-all of stats but it's a way to look at how players did by counting events as opposed to solely relying on observation. For those who are aware and wondering why now and not, say, Monday? First of all, I wanted to write about the PK. Second, consider this post a pre-preview or a post-recap as the Devils will take on the Jets on Thursday night.

First, the team totals for the game show the Devils and Jets even at 39-39. This actually corresponds well with the Fenwick timeline (that's shooting attempts without blocks counted at even strength) that truck posted at Arctic Ice Hockey a few days ago. In that, you can see the Jets and Devils about even in the first two periods before the Jets blew ahead, got another goal, and then slowed down as the Devils caught up. I don't have Corsi over time, but I can say the first period went 13-14 in favor of Winnipeg, the second period was even at 15-15, and the Devils actually did out-attempt the Jets in the third: 11-10.

I will say that the third period is still disappointment. It was a one-shot game until 7:46 into the third when the Jets increased their lead to two. Scoring effects usually suggest the losing team will make more attempts in an attempt to catch up. They usually out-attempt their opposition by a large margin. Getting just ahead of a leading team in attempts supports the assertion that the Devils weren't so desperate. It backs up what was seen, the Devils didn't not take all opportunities to at least try and put pucks on net even though the game was far from out of doubt. Unlikely, yes, but not completely over. Especially before Andrew Ladd's great shot, when it was a one goal game. That's disappointing.

I will also say that the Devils lost the game on moments as opposed to getting out-played. It was a fairly even game, as evidenced the two teams were about even in attempts for most of the first two periods when it was a close game. What broke through for Winnipeg was their power play, which gave them the tying goal, and a shot block that turned into a breakaway for Evander Kane and a failed dive by Johan Hedberg for an 3-2 score. That Kane goal really stung in the short term because it came after a long possession shift for the Devils on offense. One would think the second intermission would have used it as a rallying point to try and respond. Maybe it was, but the Devils players surely didn't get it.

Anyway, onto the charts themselves. First, the Jets, who only had one real standout player in terms of Corsi. 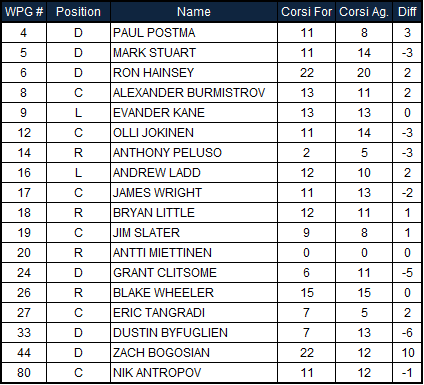 The Jets actually only played 11 forwards in this one as Antti Miettinen got hurt early in the game thanks to a puck to the groin and did not return. No one at forward did particularly well or particularly bad. Remarkably, everyone was in a range of -2 to +2. That speaks to how even it was. Even high-event lines like Blake Wheeler, Andrew Ladd, and Bryan Little & Evander Kane, Alexander Burmistrov, and Olli Jokinen took about as much as they dished out. On the flip side, it also means the Devils didn't beat up on any one line or player at forward. Considering they were down a man early, they had the last change, and a third period with a deficit to make up, that just annoys me.

Defense was a different story. Dustin Byfuglien picked up a minor injury that limited him in the third period only and he was soaking up quite a bit of pressure beforehand. As did his partner, Grant Clitsome. They were the pairing out there for the Steve Bernier goal so it wasn't like the pressure was all for naught. Incidentally, Zach Bogosian and Ron Hainsey were positive. In fact, Bogosian was fantastic in possession. He nearly doubled up in for events over against events. How Hainsey ended up at only +2 was due to the fact he was out there with Byfuglien for several events against and a few with Mark Stuart. In any case, the Jets did quite well when their #44 was on the ice. Their third pairing of Paul Postma and Stuart didn't do too bad.

As for the Devils, they were not so well distributed in Corsi differential like the Jets. 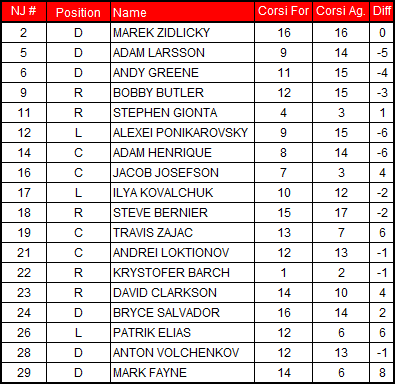 Peter DeBoer shifted his forwards around for this one and the results were, well, mixed. Patrik Elias had a very good possession game as did Travis Zajac. Both played together for most of the game and it went well. David Clarkson benefited until he was moved later on so he didn't end up quite so well. Jacob Josefson didn't play a lot at evens (8:34) and made mistake in coverage on the PK that led to Clitsome's power play goal. But at least he was positive when he was out there.

The rest of the forwards range from not bad but not positive, such as Ilya Kovalchuk, Andrei Loktionov, Bobby Butler, to plain not good such as Adam Henrique and Alexei Ponikarovsky. That's a bit strange since Loktionov, Bernier, and Ponikarovsky was a line at one point and even generated a goal. The Jets enjoyed it when #12 and/or #14 was on the ice. I suppose that's another reason why DeBoer switched things around in addition to the "let's make a change to see if we can get something going" theory. Lastly regarding the forwards, I don't know what confuses me more, Stephen Gionta only ending up with seven total events when on the ice or Steve Bernier being on the ice for a total of 32.

In looking at the blueliners, I'm wondering whether Andy Greene and Adam Larsson should have a game apart or something. They ended up on the wrong side of Corsi again and they're not generating a lot. Strangely, Marek Zidlicky and Bryce Salvador came out just ahead together and were on the ice for more positive events than other defenders. Overall, it looks decent but given that their differentials are low, it means there's reason to grouse about how they perform in their own end even though it's not just them getting picked on. Assuming it was them that got positive together. Mark Fayne and Anton Volchenkov got paired together to start and somehow Fayne ends up a +6 while Volchenkov was a -1. Fayne only played about two minutes more than Volchenkov at evens, and that extra time was with Salvador - and the Devils were attacking. Not only does this explain Fayne's differential but is also means Salvador-Zidlicky was worse than their numbers show. In other words, it's more evidence to put Fayne back with Salvador. Zidlicky can lay waste to the weak ones. Though if Larsson-Greene get split up for a game, then I have a feeling Zidlicky's remaining in the top four.

Putting it all together, the Devils needed to play to the score on Sunday and didn't. The Jets aren't a bad possession team, Hockey Analysis has them right even at 50% in Corsi%. They did a good job keeping with the Devils and playing with the lead by continuing to put up attempts. They were rewarded with an additional goal that secure their lead. Since no Jet really stood out well except for of Bogosian, it's further evidence it was a team effort.

The Devils can and should adjust their units based on how they're doing in the possession game. DeBoer should lean on the Elias line for offense, while trying to keep Kovalchuk and whoever lined up with to at least be close to even. As much as Henrique didn't do so well, I'd keep Zajac with Elias and see how that succeeds. It should if only because People Play Well with Patrik. The defense could use a shuffle, at least to put Fayne back with Salvador, which went well for a few shifts on Sunday. While the team hasn't been scoring a lot, the solution to that is to generate more shots and more attempts instead allowing chances to shoot pass by (or literally pass from shot opportunities). The good news for New Jersey is that they had three days to prepare while the Jets had to play and finish up a successful road trip. It's another game and we'll see if they'll rebound in terms of possession not unlike how Washington did on Saturday after the Devils creamed them on Thursday. If they do, then the goals may - hopefully - come.