A scoring chance report, broken down by player and situation for Game #7 of the 2013 NHL season. NJ Devils at Pittsburgh Penguins.

Today's scoring chances were not a pretty sight from a Devils perspective. What you saw on the ice pretty much translated into the numbers here. Also, if you saw the corsi chart in John's game recap, those numbers are pretty predictive of what you will see here in most cases.

Things started out not great, but not so totally lopsided. The second period was an unmitigated disaster. The third, was a bit less lopsided if you just look at the total (7-4). But, the Devils threw in three of those four chances at the very end of the third, when the game was already well out of reach. The game was well out of reach for quite some time before they even mustered up those three late chances.

Taking those away, the Devils were outchanced 19 -1 over a 35 minute stretch in the second and third periods. Oh yeah, and that one chance came shorthanded. 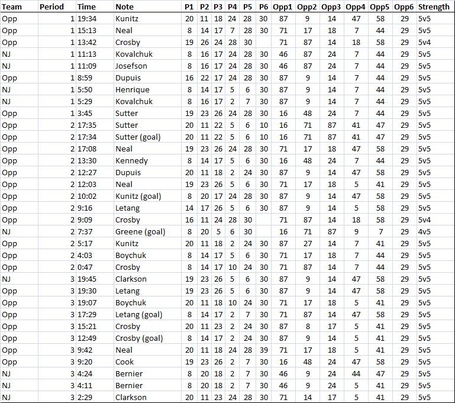 Here is a breakdown of all the chances for the Devils in each situation, including time on ice. The first column under each section is time on ice, followed by chances for, and then chances against. 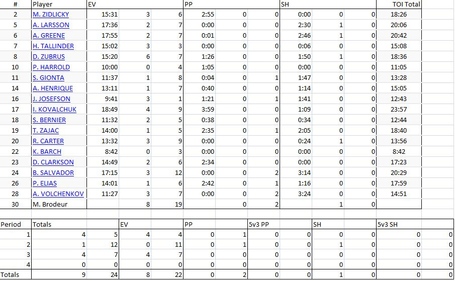