Corsi Charts of the New Jersey Devils Against Carolina, Philadelphia, and the Islanders

In catching up with recent games, this post has Corsi charts and conclusions based on those findings for the Devils and their opponents from the last three games.

Share All sharing options for: Corsi Charts of the New Jersey Devils Against Carolina, Philadelphia, and the Islanders

Since there will be a game later this early afternoon, I figure now is a good time as any to catch up with Corsi charts from the last three games. For those who don't know, Robert at Jewels from the Crown developed a spreadsheet template that takes the play by play log from a game and with some work filters out the shooting attempts (shots, blocks, missed, and goals a.k.a. Corsi) for both teams at even strength in non-empty net situations. That calculates the Corsi for each player, each team, and by period to give us another way of looking at the game. I've made a point of it to include it in the away game recaps when I could. The New Jersey Devils just had two home games and an away game so let's briefly look back at the charts from all three games.

Final Result: Carolina won 4-2, my recap of the loss is here.

Team Corsi Results: Devils led 33-27. The period breakdown went 9-16 in favor of Carolina in the first followed by the Devils leading the second and third 13-8 and 11-3, respectively. In other words, Carolina were truly better the first period. The Devils did get more attempts but got out-scored in the second, and really controlled the third until the penalties. Jiri Tlusty's empty net goal was not included.

The Charts: Here's the chart for the Hurricanes: 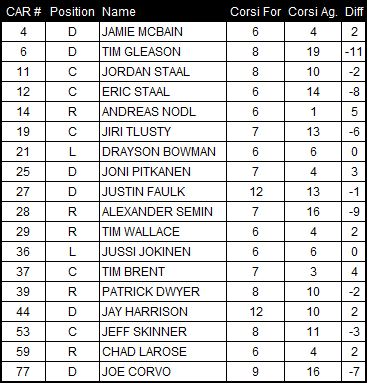 The Devils found most of their success at evens against the pairing of Joe Corvo and Tim Gleason, reflected well by their low Corsi differentials. The Devils surprisingly did very well against their top line of Eric Staal, Jiri Tlusty, and Alexander Semin. That trio was great in the first period but they faded as time went on. Of course, they combined for the power play goal that won the game - which isn't reflected here since this is all even strength shooting attempts.

And now, the Devils, where it's clear which line pressed the issue: 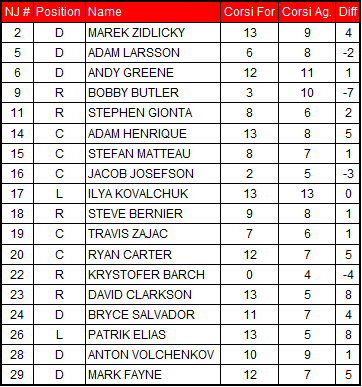 No, the line of Adam Henrique, David Clarkson, and Patrik Elias didn't score but they really drove things forward early in the third period. The only member of the bottom six who could claim to have a good night was Ryan Carter. In addition to stealing a puck and scoring early in the third to tie up the game at 2-2, plenty of good things happened when he was on the ice. The other two-thirds of CBGB were just ahead of zero, which is OK. The make-shift line of Bobby Butler, Jacob Josefson, and Krys Barch was very poor. Despite some sloppy play early in the game, nearly the entire defense recovered in Corsi; only Adam Larsson ended up below zero. Of course, that was largely driven by the forwards.

Ultimately, the Devils really did have a poor first period but they lost the game largely on special teams. While they out-attempted the Canes 11-3 in the third, much of that was early in the period. The team went about seven minutes in the third between shots (8:32 to 15:02) at evens. They didn't get anything at evens after 15:32 and a penalty minutes later helped seal the Devils fate.

Final Result: Devils won 5-3, my recap of the win is here.

Team Corsi Results: Devils were out-done 36-44. That's a lot closer than one would expect given that the Devils were outshot in all three periods. Flyers led in the first period 17-15, Devils led in the second period 17-15, and the Flyers took the third 12-4. That third period made the difference. I'm not surprised since the Devils had a whopping two shots on net against Ilya Bryzgalov at evens while the Flyers had five before pulling the goalie.

The Charts: Here's the chart for the Flyers: 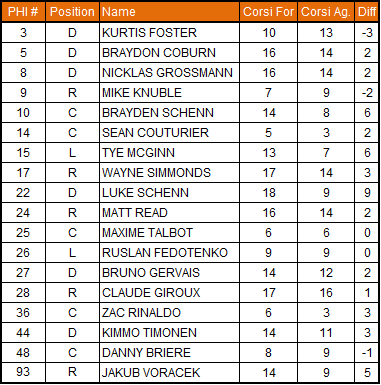 Not a lot of particularly dominant Flyers in terms of Corsi differential except for Jakub Voracek, Brayden Schenn, and Tye McGinn. Believe it or not, that's a whole line and they really did their damage throughout the game until about five minutes into the third. Wayne Simmonds did quite a bit of his good work with Voracek too. Like Simmonds, Claude Giroux and Matt Read don't have eye-popping Corsi differentials but it's no surprise they have a lot of double-digit events in Corsi for. Good thing the Devils were able to find success against them. As a last notable finding, Luke Schenn came out real well in this game; better than his partner Kimmo Timonen.

Here is the chart for Devils, led by a familiar line: 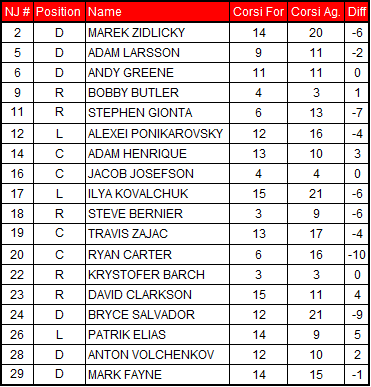 In this game, the Devils looked pretty out of it defensively and later in the game, Mark Fayne was demoted to playing with Anton Volchenkov while Marek Zidlicky was paired up with Bryce Salvador. That switch didn't do Zidlicky or Salvador any favors; the Flyers were able to generate plenty of offense against them. Speaking of Devils who were on the wrong side of the possession game, look at the Zajac line. As great as Ilya Kovalchuk looked, he was often defending more than attacking. The same went for Travis Zajac and Alexei Ponikarovsky. Fortunately, that unit created three goals so . The CBGB line was similarly beaten badly in terms of possession; Carter was especially picked on. The bright spot on possession were that the Henrique line remained positive yet again and the fourth line was a wash.

Nevertheless, the Devils had trouble matching up with the Flyers and that lackluster offensive effort in the third period hurt in possession even though it was enough for them to complete the comeback. On another night, one goal on two shots to take the lead probably doesn't happen.

Final Result: Islanders won 5-1, my recap of the loss is here.

Team Corsi Results: Devils led slightly 44-43. While the Devils had a considerable lead in shots in the first period and the Isles took over the second and third, the two teams ended up even in attempts. The period breakdown went 17-15 in favor of New Jersey, 23-16 in favor the Islanders, and 11-5 in favor of the Devils. The problem was that the Devils had a considerable amount of misses and blocks whereas the Isles had just a few more on net in the second period. Incidentally, the Isles' five attempts were remarkably accurate: four shots and that wacky fifth goal at the end of the game. The team count in attempts is consistent with how up-and-down the game was; the Devils really did blow this one on special teams. The myriad of non-shots in the second didn't help, though.

The Charts: Here's the chart for the Islanders. Guess who led the team: 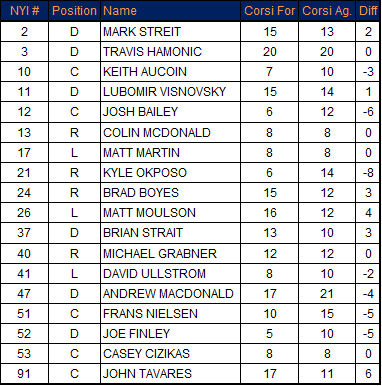 John Tavares was awesome last night. He led the team in Corsi differential in addition to scoring three goals, assisting on the non-comedy goal by Matt Moulson, and had six shots on net. Remarkably, the Isles defense all nearly came out positive except for Joe Finley and Andrew MacDonald. Finley was forced into some tough spots; and MacDonald struggled at times. Nevertheless, their blueline came out ahead by way of giving back what they took. The non-Tavares lines were just "there." The Devils either cancelled them out (Casey Cizikas' line) or got an edge (Frans Nielsen's line).

Here is the Devils' chart for the game. 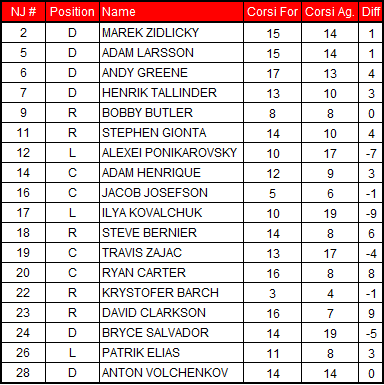 It's almost like a broken record at this point: Zajac line wasn't good in possession, Henrique line was much better in possession. As much as the Zajac line keeps generating attempts, they've been getting out-done regularly. The addition of Ponikarovsky hasn't helped much right away. I fear that if it continues, then all three will be undercut in terms of production and it would be a point of attack for the opposition. David Clarkson in particular stood out in a big way. His eight shooting attempts led the team in all situations and he really put in good work at evens. Also, I liked what I saw from the CBGB line and the Corsi proves me right in retrospect. They were doing very well against the Isles and drove the play.

What did you learn from looking at the Corsi charts from the last three games? Are you concerned that the Zajac line keeps being on the wrong side of possession more often than not? Are you pleased to see how effective the Henrique line has been going in the right way? Would you make any changes on defense based on the possession other than making sure Fayne gets back in? Please leave your answers and other thoughts about the team's play at even strength in recent games.