A Quick Look at TOI for the New Jersey Devils

In a shortened season, it is important to have balanced ice time for the team, has Peter DeBoer been sharing the minutes?

Share All sharing options for: A Quick Look at TOI for the New Jersey Devils

The New Jersey Devils are already one quarter of the way through the shortened season. Normally it's about 20 games into the season that we reach the quarter mark, however this season it's only 12 games. Given the fact the the schedule is so compact, I decided to take a look at how much ice time the Devils players are logging so far this season.

I'll start by taking a look at time on ice for the man advantage. 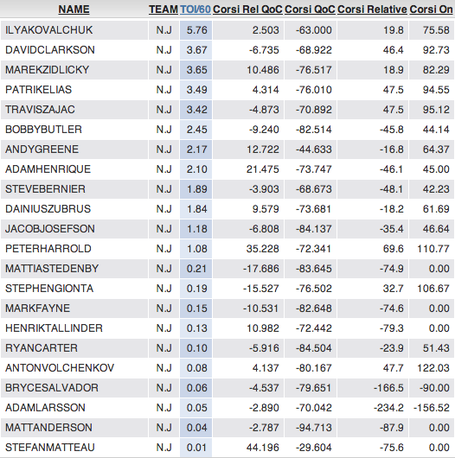 After those players, there is a drop off in ice time. Bobby Butler sees just less than 2.5 minutes a game while Andy Greene and Adam Henrique see about two minutes of ice time. Given the compact nature of the schedule, I see Kovalchuk's minutes decreasingly slighty as the season continues. I also believe Henrique will see a slight increase when Kovalchuk plays a little less.

Next up is the time on ice for the penalty kill. 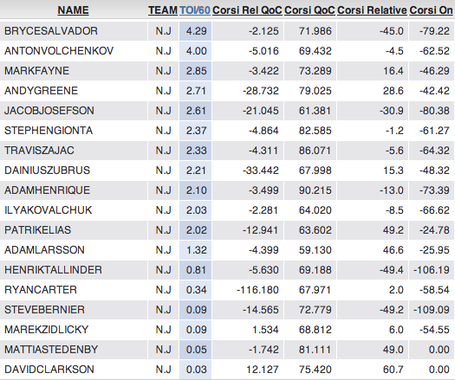 As for the PK, we see two players who really stand out in TOI: Bryce Salvador and Anton Volchenkov. These two each play more than four minutes of PK time per game. Consequently these two also had almost no power play time, which is fine with me because neither one is known for their offensive abilities. After those two shut down defensemen is the pairing of Mark Fayne and Andy Greene. These two both play almost three minutes of PK time. Also of interest is that they end up playing against relatively tougher competition than Volchenkov and Salvador. Another interesting thing I saw was that Jacob Josefson plays the most PK time of any forward. As for the other forwards that kill penalty time, there are about eight forwards who play between 2 and 2.5 minutes. Last year the Devils superb penalty kill relied heavily on Parise, Zubrus, Elias and Henrique. Perhaps the spread out penalty kill time is due to the condensed schedule and the sheer amount of penalties the Devils are taking?

Finally, let's take a look at who has been playing the most even strength time. Hint: Not Kovalchuk. 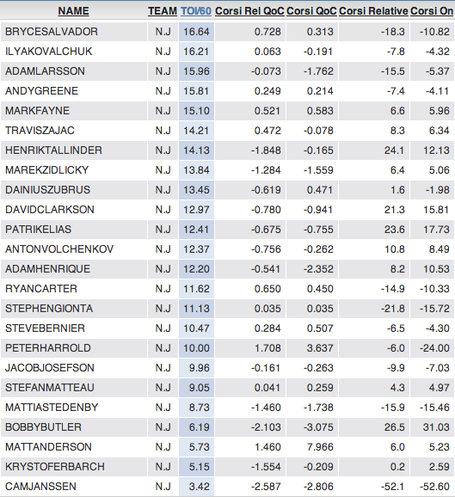 At even strength, the Devil's captain Bryce Salvador averages 16.64 minutes per game. Right behind Salvador is Kovalchuk who beats out any other forward in ice time by over two minutes. Kovalchuk's stamina is downright scary sometime. He will man the power play, play a shift on the first line and then take a quick break and play a couple second with the fourth line. I think DeBoer will need to control Kovalchuk's ice time once the season gets into the second half. Especially in March, the Devils have four sets of back-to-back games in which I would hate to see Kovalchuk get an injury.

After Kovalchuk, Adam Larsson averages almost 16 minutes of even strength time. Larsson likes takes a lot of even strength minutes because DeBoer does not play him much on special teams. Given that Larsson is young and only in his second season, it makes sense to let him build some skill on special teams in practice before putting him in a game situation. Another interesting note for Larsson, the Devils play him against relatively easier competition. The other player's facing weaker competition at even strength: Zidlicky, Clarkson, and Henrique. Of these four players, Larsson is the only one that has a negative Corsi playing against the weaker competition.

Another note, the Devils play their goons the least! Krystofer Barch and Cam Janssen see very little ice time at even strength and almost no special teams time!

Overall, I feel pretty good about the mix of ice time that the players are getting. I question the wide array of forwards on the penalty kill, but if it continues to do well, I have no complaints. How do you feel about the distribution of ice time amongst the Devils players? Are there any players you feel should be getting more time in certain situations? Thanks for reading!