A scoring chance report, broken down by player and situation for Game #12 of the 2013 NHL season. NJ Devils at Pittsburgh Penguins

For anyone who has been following along with these scoring chance reports, this will be one of the more positive ones in terms of Devils production. The majority of the Devils were positive. Bryce Salvador was amazingly +8 at even strength and +7 overall. Not surprisingly, his partner, Mark Fayne was a +4 on the game. Andy Greene, who has just been a boss lately, was also a +4. The biggest negative was Anton Volchenkov at -7 ES and -8 overall. Still, the Devils were outchanced 9-2 in the first period, yet managed to battle back and lead 18-16 overall for the game. The Elias line came out roughly even, except for Henrique, who, as John mentioned in the recap, gained some extra shifts which proved to be very productive.

As an aside, the scoring chance report often sometimes correlates closely with the Corsi chart, but certainly not in every case. Blocked shots never count as scoring chances, regardless of the situation, while they are all included as Corsi events.

For anyone not too familiar with scoring chances, what defines a scoring chance, etc. I will refer you to Derek Zona's post from the beginning of last season.

I know the chart isn't really readable at a glance. Please click on the chart for a closer view. 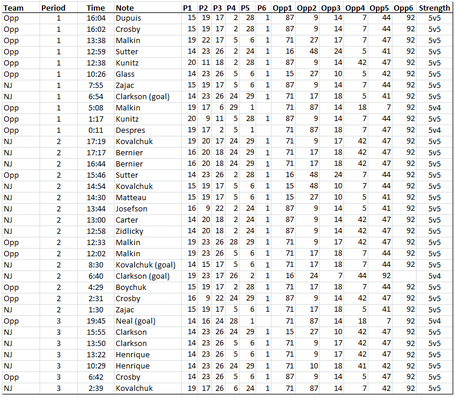 Here is a breakdown of all the chances for the Devils in each situation, including time on ice. The first column under each section is time on ice, followed by chances for, and then chances against.

Again, please click on the chart for a closer view. 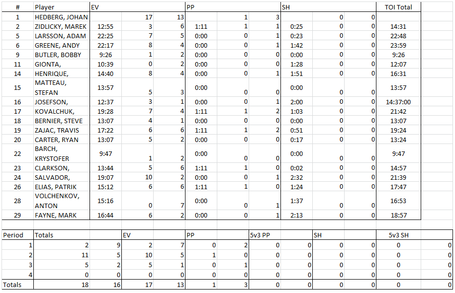