This is a look at the Devils zone exit and passing stats when they took on the Rangers Saturday Night. The forwards were good; the defensemen could have been better. Read on for the evidence.

The Devils and Rangers played a back and forth game that finished the way all Devils always want it to against the Rangers. Despite going down 0-2 early in the 2nd period, the Devils took over most of the game going forward and outscored the Rangers 3-0 5-on-5 the rest of the way. A PPG apiece at the end of regulation and early in OT secured the 2 points for the Devils. Let’s get to it.

Reid Boucher followed up a dud with a very good passing game. He went 7/8 in the offensive zone and generated 6 shot attempts. The 6 SAG tied him with Jaromir Jagr for the team lead on the night. Dainius Zubrus generated 4 shot attempts on 10/12 passing. The next highest were Adam Henrique, Patrik Elias, and Tim Sestito with 3 SAG each. The only forwards not to generate anything? Cam Janssen and Damien Brunner.

Travis Zajac was quite busy in the defensive zone, going 8/8 and 6/8 on the other 2 zones. Michael Ryder, Andrei Loktionov, and Brunner had “meh” games with not too much production to speak of, other than Ryder’s goal of course, which was a great individual effort. Overall, the forwards generated 31 shot attempts, which is well above their season average.

Not as active in the offensive zone as they’ve been recently, no doubt some of which is a direct result of Marek Zidlicky’s absence. The group averaged over 81% in each zone, which is a few points better than the season average. Andy Greene had a rare off-night, completing 8/13 in his own end. He was the group’s highest generator of shot attempts with 3. Peter Harrold was good considering this was first game in the last 5 or so. Mark Fayne and Anton Volchenkov were decent, nothing great or terrible to point out. 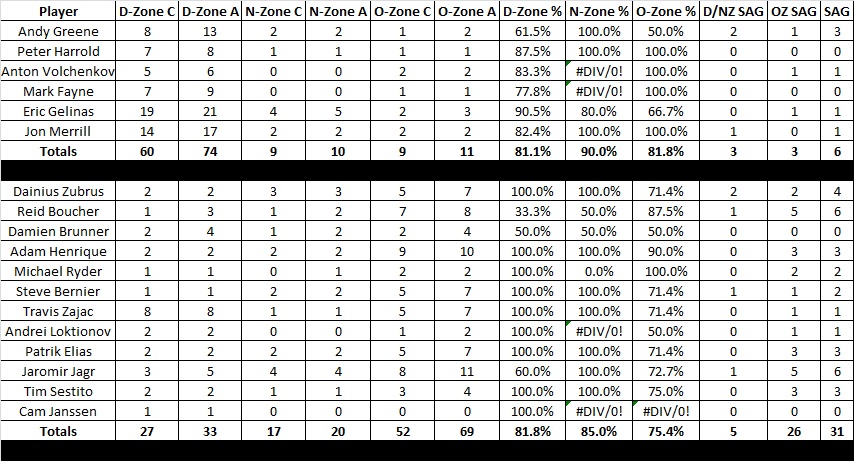 The forwards only had 1 turnover and had a 52.1 PE% for the game. Notable performers were Jagr (of course) at 57.1 PE% on his 7 attempts. Zajac was 9/9, but only 3 maintained possession. Sestito went 4/5, but only 1 maintained possesion. Ryder and Brunner had decent exits. Boucher and Zubrus were the other forwards who finished below 50 PE%.

Greene’s below-average passing for the game resulted in a few pass turnovers in his end. Harrold’s turnover was early on, but he was steady the rest of the way. Fayne and Volchenkov combined to attempt 19 zone exits, successful on every one of them. Their PE%s were 42.9 and 33.3 respectively. Volchenkov continues to be exactly what a 3rd pairing defenseman should be: effective at clearing the puck out of the zone and not taking many risks.

Collectively, the defensemen finished at 40.6 PE%, another game below their season average. Harrold was the only blue liner at the 50 PE% mark. 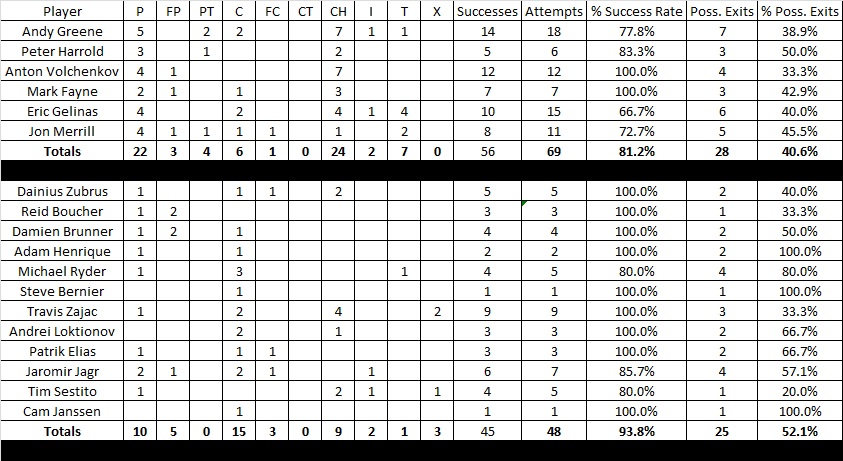