This article takes a look at the Devils zone exits and passing stats against the Detroit Red Wings. Read on if you feel like falling into a brief depression.

The Red Wings came to New Jersey minus their two best players and the Devils capitalized on exactly nothing. It was an ugly game and the Devils couldn't get anything going. As one would suggest, the stats in this article aren't pretty. In short, the Devils played a very poor game, with the forwards generating their 2nd lowest total in shot attempts. Only that pathetic display against our Second Rate Rivals early in November was lower than 12 SAG.

Reid Boucher couldn’t follow up his solid debut with another good game as he barely registered on the passing stat sheet. Jacob Josefson only missed 1 of his 6 passes.

As a side note here, I’ve noticed that Josefson regularly intercepts passes. Would it be worthwhile to record pass interceptions/break ups? Thoughts on this? Let me know in the comments.

Mark Fayne was the best passing defensemen, completing 14/15 and generating 3 shot attempts. Eric Gelinas and Jon Merrill were not as efficient as they have been since being paired together, each missing on 3 passes in the defensive zone. Together, they combined to generate 3 shot attempts. Andy Greene was the busiest in all 3 zones, attempting 26 passes and completing 21, generating 2 shot attempts. Marek Zidlicky had a terrible night, missing 6 passes in the defensive zone. Anton Volchenkov was his usual less-than-active self, completing all 6 of his passes. 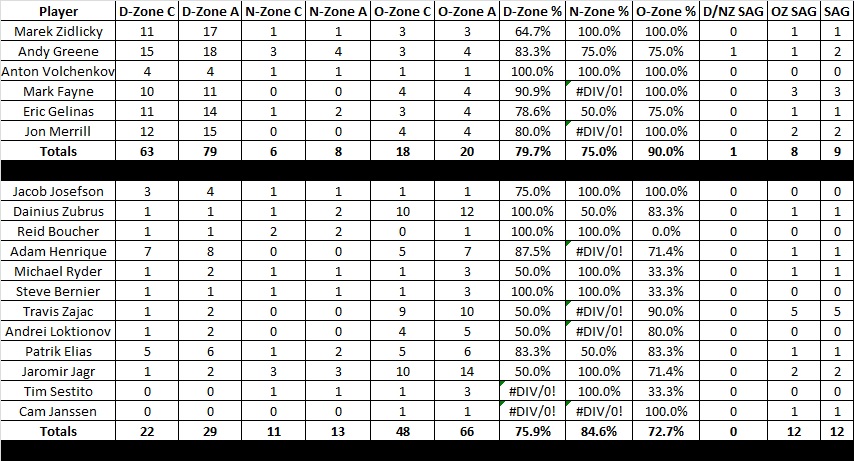 Collectively, the forwards may have had their worst game, finishing at 35.2 PE%. Jagr, Boucher, and Henrique were the only forwards to finish at 50 PE% or higher, and Jagr was way out in front at 80 PE%. Boucher actually led the Devils in exit attempts with 8. Josefson and Elias were the only other forwards above the group average as they finished at 40 PE%. Again, this was, statistically, their worst zone exit game thus far.

While the defensemen’s passing wasn’t altogether terrible as a group, their zone exits left a lot to be desired. They finished at 37.7 PE%, several points below their season average. Also, the defensemen committed 9 turnovers, with Fayne, Volchenkov, and Zidlicky each recording multiple turnovers. Gelinas and Merrill were the only defensemen at 50 PE% or higher. 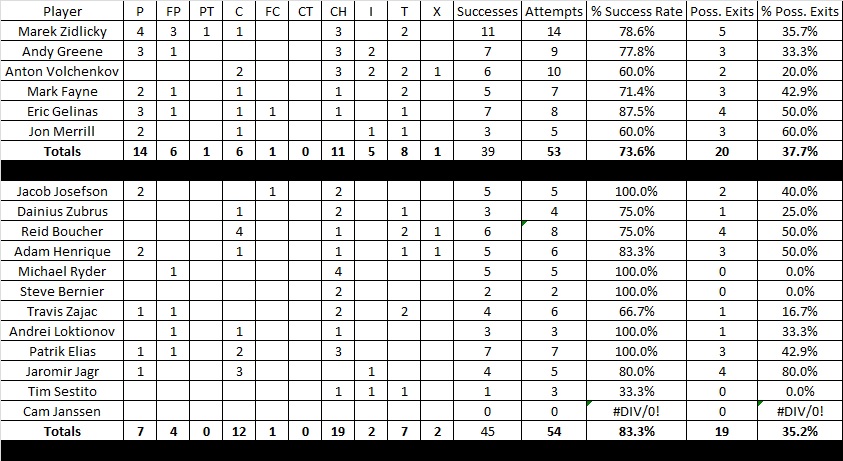